During the spring of 2015, a highly pathogenic strain of avian flu spread to poultry in the United States, forcing agriculture officials to destroy tens of millions of birds and prompting policymakers to question the country’s food-safety mechanisms. Various strains of this virus, which occur naturally in wild birds, have killed hundreds of people in the Asia-Pacific region over the last few decades. The bird flu is not new to the United States—there were outbreaks in 1924, 1983, and 2004—but the 2015 epidemic is the largest to date, and scientists expect the virus to resurge later this year. Experts say the risk of humans becoming infected by the strain circulating in U.S. birds is very low, but its costs have already run into the hundreds of millions of dollars. Moreover, future strains of the virus could seriously threaten public health.

What is avian flu?

Avian influenza is an infectious viral disease that primarily affects birds, although some strains can infect and kill mammals, including humans. Highly pathogenic strains of avian influenza have a 90 to 100 percent mortality rate among poultry.  Most infected birds die within forty-eight hours. Less severe strains of the disease are known as low-pathogenic avian influenza. Researchers say poultry in the United States are likely catching the disease from wild ducks and geese, which can carry it without becoming sick.

Human cases of bird flu are rare [PDF]. Most humans who have been infected with avian influenza had contact with live poultry, and there are no reports of humans contracting the virus by consuming properly cooked poultry or eggs. Mortality rates for humans infected with avian flu are high, and symptoms include flu-like symptoms as well as conjunctivitis (pink eye), respiratory illness (ranging from shortness of breath to respiratory failure), multi-organ failure, and neurological damage.

Where is avian flu?

Avian flu is an infectious viral disease found in birds that often does not cause apparent illness in wild birds. Avian flu can cause widespread outbreaks in domestic poultry, and some strains have infected humans. One strain of the virus that has crossed the species barrier is H5N1, which was discovered in Hong Kong in 1996 and has been found in birds in more than fifty countries in Africa, Asia, Europe, and the Middle East. H5N1 has infected more than seven hundred people since 2003, killing more than 60 percent of those it infects. H7N9 [PDF], another strain that was found in China in 2013, infected nearly six hundred people and killed more than two hundred. All but four of these cases were reported in China. 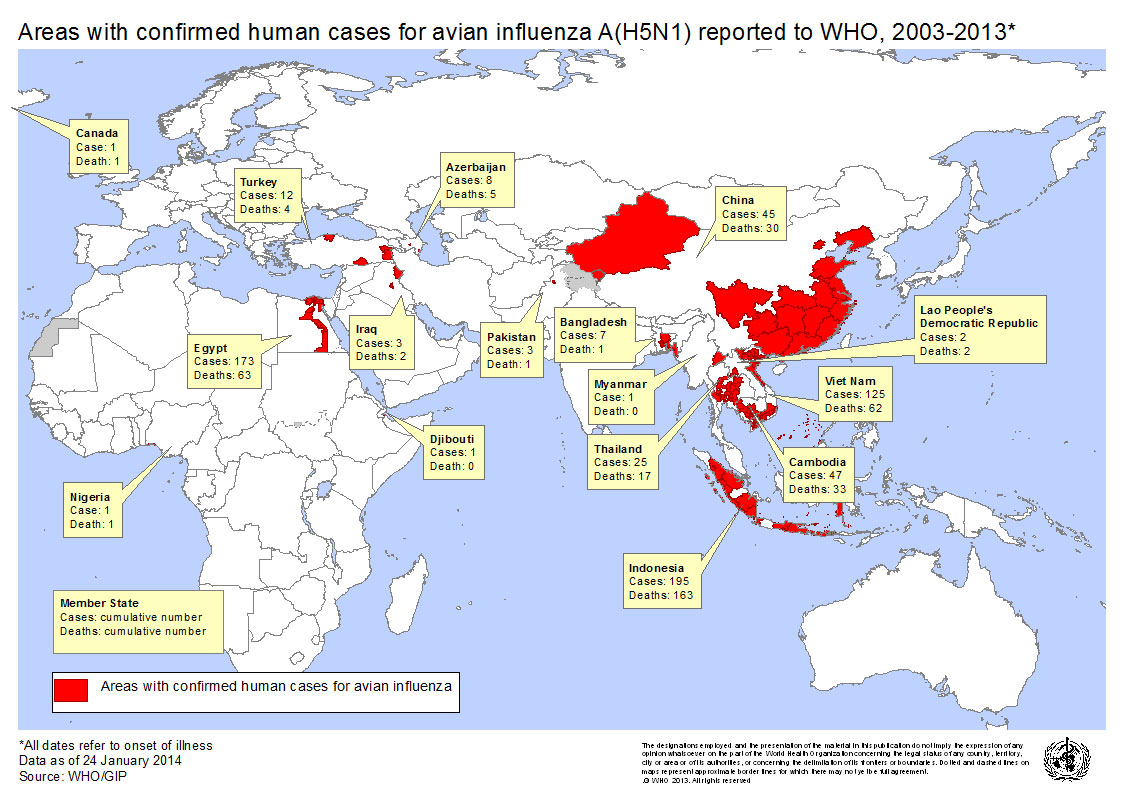 During the 2015 U.S. avian flu outbreak, twenty-one U.S. states, mostly in the Midwest, Central Plains, and West, reported cases of infected birds. Nearly thirty million birds were destroyed in Iowa alone. "We have never seen so many virulent strains in circulation at the same time," says CFR Senior Fellow for Global Health Laurie Garrett. "And it’s in every part of the world." Three strains of avian flu have been found in recent months: H5N2, H5N8, and a new H5N1. (The H5N2 strain of the virus was the most prevalent.) 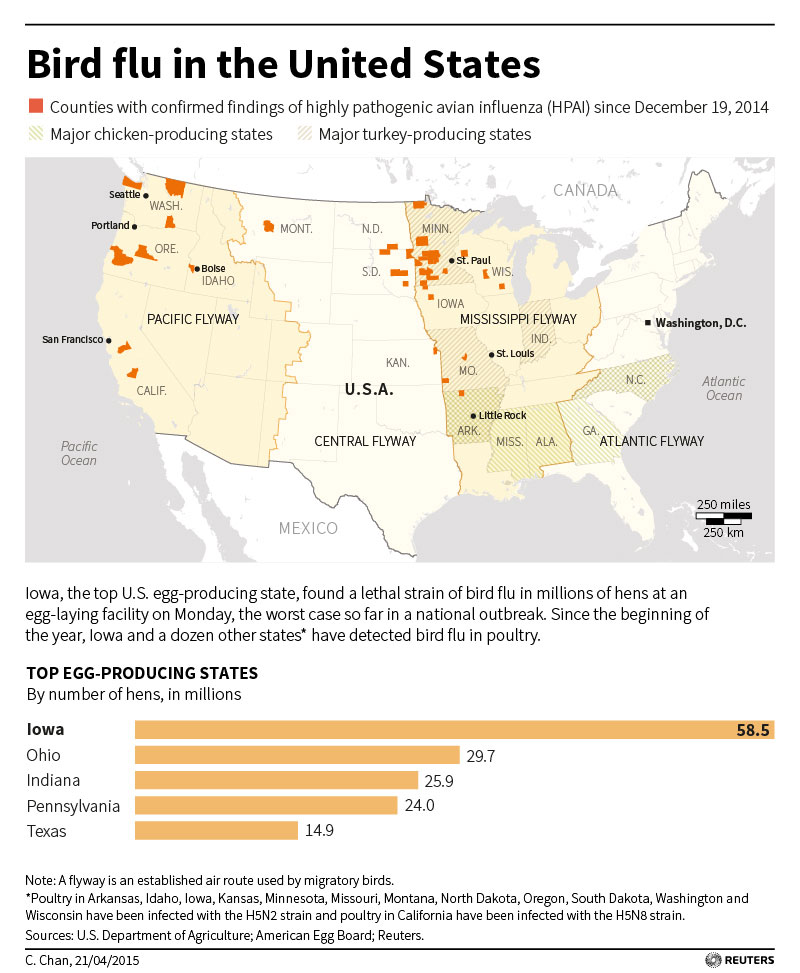 How significant is the threat to U.S. public health?

The Centers for Disease Control and Prevention warned U.S. public-health workers of the potential for human infection in June 2015. Experts, however, say the risk of H5N2 spreading to humans is low. Similarly, H5N1 is not highly infectious in humans. It takes between a hundred thousand and a million bird-flu particles (compared to one to ten human-flu particles) for a human to be infected, according to  Peter Palese, who specializes in flu viruses at Mount Sinai’s Icahn School of Medicine, in New York.

Some scientists are concerned that pigs, which live in close proximity to poultry on farms in the United States, may transmit the bird disease to other mammals. "Pigs are uniquely susceptible to both human and bird viruses, and their lung cells can become infected with both, so they serve as an ideal mixing vessel for both the bird and human viruses," says Michael T. Osterholm, director of the Center for Infectious Disease Research and Policy at the University of Minnesota. "We’re concerned about whether they could be the place where a new human virus emerges."

What is driving the spread of avian flu?

The strains of avian flu spreading across the United States are believed to be combinations of a North American strain of avian flu and the Asian strain of H5N1 that were brought by wild birds migrating on the Pacific flyway, a major north-south route that extends from Alaska to Patagonia. Experts say bird-migration patterns have been affected in recent years by climate change, bringing viruses from different parts of world into contact and causing them to mutate.

Increasingly dense poultry farms may also account for avian flu’s spread among U.S. domestic foul. The Wall Street Journal reports that some ten thousand egg companies in the 1970s have consolidated to fewer than two hundred today. Osterholm says researchers are looking into why the disease has spread in some farms but not others.

Can avian flu be contained?

U.S. farmers monitor their poultry for the disease, and public-health officials recommend large-scale culling of flocks exposed to the virus. To prevent the virus from spreading to humans, cullers and cleaners wear hazardous-materials suits, including face masks and goggles. The U.S.  Department of Agriculture (USDA) is reportedly developing a poultry vaccine [PDF] for the strains circulating in the United States. The United States maintains a stockpile of H5N1 vaccines for humans; individuals who have had contact with infected poultry are generally advised to take Tamiflu, a flu preventive.

What has been the economic impact of the recent U.S. outbreak?

The 2015 avian-flu epidemic is the largest health crisis ever to spread among U.S. livestock. The costs of the unraveling epidemic are not yet clear.  The USDA said in June that the outbreak could cost nearly $500 million. China, Japan, and Mexico, among other countries, have banned poultry imports from the United States. In May, the wholesale price for eggs more than doubled [PDF], according to the USDA. Iowa, Minnesota, Nebraska, and Wisconsin declared states of emergency amid the outbreak to access emergency funds.

CFR's Laurie Garrett says that 2015 may be the most complicated year in history for influenza.

Michael Specter assesses the risk of avian flu spreading to humans in the New Yorker.

The Wall Street Journal looks at the impact on the U.S. agriculture industry of the avian-flu outbreak.