Polio, once nearly eradicated, has experienced an uptick in recent years, prompting the World Health Organization (WHO) to declare an international health emergency in May 2014. Three hundred and fifty-nine cases were reported in 2014, up from 223 two years before (although down from 416 in 2013), with the vast majority of infections in Pakistan. Suspicion of Western vaccine campaigns (which have sometimes resulted in deadly attacks against health workers) and poor health-care infrastructure have hampered efforts at eradication. At its peak, the disease killed or paralyzed [PDF] a half million people each year, but breakthroughs in vaccines and public health programs made huge progress. Still, vaccinating the world’s remaining unprotected children has proven challenging.

The virus is most often transmitted by sewage-contaminated drinking water. It can survive for two months outside the body and is particularly transmissible in areas with open sewers. About three-fourths of infections are asymptomatic, allowing the disease to spread undetected. When the virus reaches the brain and spinal cord, it can result in permanent paralysis or death.

Since there is no cure for polio, public health officials have focused on mass immunization to control the disease. Two polio vaccines are widely used: the inactivated polio vaccine (IPV), developed by Jonas Salk in 1954, which is administered through injection and gives immunity through one dose, and the oral polio vaccine (OPV), developed by Albert Sabin in 1961, which contains live strains of the virus and is more easily administered than the Salk vaccine. Both vaccines lose efficacy when exposed to high temperatures and therefore must be kept cool. The OPV requires several boosters to be effective.

How successful have eradication efforts been?

In 1955 Salk announced the successful results of a large-scale test of the first polio vaccine, and by 1957 a mass immunization campaign had reduced the U.S. infection rate by 90 percent. By the time Sabin developed the orally administered vaccine four years later, there were only 161 recorded cases of polio in the United States. The country was declared free of the disease in 1979.

Some campaigns were carried out under extremely difficult conditions. For example, Garrett says that even at the height of civil conflicts in the Central American countries of El Salvador, Guatemala, and Nicaragua, combatants observed cease-fires to permit mass vaccinations [PDF]. Typically UNICEF and local health workers would join forces to administer immunizations. "Until the Taliban and Islamists in Nigeria changed the entire picture, it was the case that polio vaccination was not going to be part of conflict. [Polio] had a truly neutral status," Garrett says.

In 1988 the WHO, having rid the world of smallpox eight years before, launched the Global Polio Eradication Initiative (GPEI) in partnership with Rotary International, UNICEF, and the U.S. Centers for Disease Control (CDC). At the time there were 350,000 cases reported worldwide; that figure fell by 99 percent by 2000. The Bill and Melinda Gates Foundation has become a champion of fighting polio, donating almost $2 billion to eradication and galvanizing support among donor countries and private citizens.

The CDC estimates that vaccination has prevented [PDF] thirteen million cases of paralytic polio and 650,000 polio-related deaths since 1988. India, which as recently as 2002 reported 1,600 cases (then four-fifths of the world’s total), was declared polio-free in 2014. According to the CDC, 80 percent of the world’s population now lives in polio-free zones.

August 2015 marked a major advance in polio eradication efforts. Officials said no new cases of polio had been detected in Africa in a year; the last case reported on the continent was in Somalia, in August 2014. Nigeria, the last country in Africa were the disease remained endemic, reported its last case in July 2014. However, experts caution that the success is “fragile.” The World Health Organization does not declare any place polio-free until three years pass without any new cases detected.

Where is polio now?

Polio remains endemic mostly in conflict zones, where war has disrupted health systems, and in areas where refugees from those conflicts have resettled. In 2014, 80 percent of the world’s polio cases were found in Pakistan. Most cases there have been reported in the conflict-ridden regions of North Waziristan, South Waziristan, and Khyber Pakhtunkhwa, although twenty-two districts reported the disease in 2014, including Karachi, the country’s largest city. A GPEI Independent Monitoring Board report calls the situation in Pakistan [PDF] a "disaster" and the "major stumbling block to global polio eradication," adding that the country presented a risk to its neighbors and other countries.

In addition to Pakistan, polio is endemic in Afghanistan, and in 2014 cases were also reported in Cameroon, the Central African Republic, Equatorial Guinea, Ethiopia, Iraq, Nigeria, Somalia, and Syria. Strains of the polio virus were also detected in sewage in Israel and Brazil, although no cases were reported in either country. The map of polio, writes journalist Sarah Stillman, "is a map of modern political violence." Syria, for example, which had been polio-free since 1995, saw a surge in the disease in 2013 and 2014, which experts attributed to the country’s civil war. (Syria’s outbreak has since abated.)

Why has eradication proven so difficult?

Polio is extremely contagious and most carriers never show symptoms. According to the CDC, for each person who displays paralytic symptoms of polio, there are as many as two hundred others [PDF] carrying the disease, potentially infecting others. The polio vaccine is also more complicated to administer than the smallpox vaccine was: The oral vaccine must be administered several times and be kept cool. As physician and journalist Atul Gawande writes, the difference between eradicating smallpox and polio is "the difference between extinguishing a candle flame and putting out a forest fire." Still, the elimination of polio in India and its persistence in conflict zones indicate that the challenge to eradication is more political than scientific.

A major challenge to eradicating polio is mistrust of the West and vaccine programs. Despite national governments’ public support for polio eradication efforts, there is powerful opposition to vaccines in some afflicted areas. Militants in Pakistan, Afghanistan, and Nigeria have attacked polio immunization workers, killing sixty-five in Pakistan between December 2012 and December 2014. In 2013, nine polio vaccine workers were killed in Nigeria, and in 2012, one was killed in Afghanistan.

Misinformation has undermined polio vaccine campaigns in Pakistan and Nigeria. A 2014 Harvard School of Public Health poll [PDF] of those countries found that between a quarter and a third of parents believed polio paralysis was curable, and between a fifth and a third did not know that the oral vaccination must be administered multiple times to maximize its efficacy. The poll also found that mistrust of polio workers is higher in conflict-ridden zones such as the Federally Administered Tribal Areas (FATA) of Pakistan and the state of Borno in Nigeria. In those areas, nearly half of the parents surveyed said they had heard rumors that the vaccine sterilizes children. Despite misperceptions, the poll still found low refusal rates for the OPV.

In 2012 a Pakistani Taliban commander banned polio vaccinations in North Waziristan, and they are now also banned in Taliban-controlled South Waziristan, as well as in Afghanistan’s southern Helmand province. (The Afghan Taliban had previously condoned anti-polio efforts.) Health officials estimate that as a result of the militants’ bans in Pakistan, 250,000 children have gone unvaccinated. 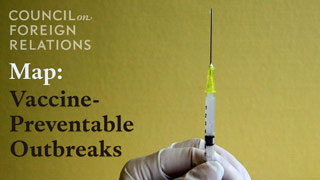 Pakistani Taliban officials say the ban is in response to U.S. drone strikes. But vaccination efforts have been further complicated by a controversial CIA-backed move in 2011 in which a medical team ran a hepatitis B vaccination campaign to gather information about Osama bin Laden’s whereabouts. Health officials have criticized the ruse as threatening to "set back global public health efforts by decades," and in 2014, the CIA banned the practice of using vaccine programs as cover for its operations.

The governments of polio-afflicted countries also share responsibility. The GPEI, in a scathing 2014 report [PDF] on Pakistan’s polio eradication efforts, said "it is clear that the level of political commitment, the extent of engagement of regional and local leaders, the quality of public health leadership and management, and the involvement of civil society are totally inadequate." In October 2014, Pakistani Prime Minister Nawaz Sharif said that polio vaccinations were the right of every child and vowed to rid his country of the disease within six months.

What is being done to eradicate polio?

The WHO declared a Public Health Emergency of International Concern (PHEIC) in May 2014, recommending that anyone leaving Pakistan, Syria, and Cameroon should be vaccinated before travel and calling for WHO member states to fill the nearly $1 billion gap in GPEI’s Polio Eradication and Endgame Strategic Plan 2013–2018 budget. The plan calls for more targeted vaccination efforts, improved health infrastructure, and strategies to secure community buy in.

Experts say the WHO declaration puts the most pressure on the government of Pakistan. "The WHO is trying to signal to the Pakistani government that there will be zero tolerance for all the excuses we’ve been hearing for years," says Garrett. She says there have been increasing calls for the Pakistani military to protect vaccine workers, many of whom went on strike after four were killed in November 2014.

Nigeria reported 122 cases in 2012; no new case has been reported since July 2014 in spite of the Boko Haram insurgency that has brought instability to the country’s northeast. Experts credit improved monitoring and coordination of public-health efforts, as well as extensive campaigns to convince many once-skeptical Muslim clerics in Nigeria’s north to advocate for polio vaccination.

Governments and health advocates have appealed to influential Muslim clerics to condone polio vaccination. In 2013 Maulana Sami ul-Haq, a prominent Pakistani cleric whose seminary is thought to wield influence with the Taliban in both Pakistan and Afghanistan, issued a fatwa in support of polio vaccination. Clerics in northern Nigeria have come out in support of vaccination as well.

What is the cost of eradicating polio?

The GPEI estimates it will cost $5.5 billion to eradicate polio by 2018; more than $10 billion has been spent to date. High costs—both in money and lives—have led some critics to wonder whether total eradication is feasible—or worth the expense. Indeed, anti-vaccine militants have killed more people than polio has in recent years.

However, a 2010 study [PDF] in the journal Vaccine found that the eradication of polio could yield as much as $50 billion in economic benefits by 2035. A 2013 GPEI report [PDF] argues that the infrastructure built through anti-polio efforts can benefit other development initiatives by helping health workers to treat difficult-to-reach populations. The potential human costs of not eradicating polio are high: A 2007 study published in the Lancet projected as many as two hundred thousand cases of paralytic polio could emerge per year if efforts wane.

But there are reasons for hope: Africa has record-low numbers of polio infections and Pakistani authorities recently asserted control of North Waziristan. "Things are as good as they’re going to get," GPEI’s 2014 Independent Monitoring Board report argues. "It is absolutely vital that both opportunities are seized."

"The Surge" by Matthieu Aikins gives an on-the-ground look at vaccination efforts in Afghanistan.

Annie Sparrow chronicles the rise of polio in Syria amid unrest there.

What’s Next for U.S. Trade With China?

This week, the Biden administration outlined its approach to trade with China. Here’s what to know.

Why Are Haitian Migrants Gathering at the U.S. Border?

The arrival of tens of thousands of Haitian migrants at the U.S.-Mexico border has generated domestic criticism from all sides that the Biden administration has poorly handled a cascading humanitarian crisis.

What’s Next for the Quad?

The most recent Quad summit proved that the grouping is here to stay, but it faces a number of immediate challenges in accomplishing its ambitious agenda.

The Pandora Papers, With Miles Kahler

Miles Kahler, senior fellow for global governance at CFR, sits down with James M. Lindsay to discuss the recent Pandora Papers leak, and the broader problem of global corruption.