Many economists see student loan programs as a sound financial investment in U.S. human capital and future economic prosperity, but questions remain as to the appropriate level of federal involvement. High school graduates in the United States continue to pursue college education in record numbers despite soaring tuition rates and the considerable borrowing often required. In 2013, nearly forty million students—or their parents—owed more than $1 trillion in federal student loans. For most, the potential economic payoff of a postsecondary education outweighs the costs, but many graduates are concerned about encountering a weak job market and the consequences that lingering debt may have on their financial futures. In turn, some in Washington are wary of the drag this borrowing has on the economic recovery.

What are the major policies that drive federal student lending?

In 1965, the Lyndon B. Johnson administration expanded federal funding and involvement at all levels of education with the Higher Education Act (HEA), providing grants for college students from low-income households and helping reduce the cost of student loans. HEA has been reauthorized and expanded many times, including with the creation of Pell grants in 1972.

The College Cost Reduction and Access Act (CCRAA) of 2007 improved the ability of borrowers to manage their debt with income-based repayment plans and gradually halved interest rates [PDF] on Stafford loans, the most common type of federal student lending, which are need-based. In 2012, a one-year extension of the 3.4 percent rate was passed. Once again, legislation in 2013 kept interest rates on federal student loans low, but allowed them to adjust with financial markets.

Why has U.S. student loan debt increased over time?

Student loan debt passed $1 trillion dollars in 2013—quadrupling since 2004—and was the only household debt that rose during the recent recession, surpassing auto loans and credit card debt. Only home mortgage debt was larger, at $8.5 trillion. Moreover, student loans have had the highest ninety-day delinquency rate among all loan types since mid-2012, according to the New York Federal Reserve. 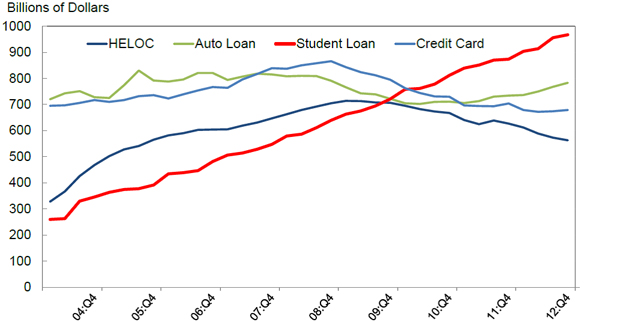 Student debt has grown because more and more students are attending college, and borrowing to do so. In 1989, less than 45 percent of graduating high schoolers enrolled in higher education, compared to 60 percent in 2011. In 1993, only 45 percent of college graduates borrowed—primarily with federally backed loans—while in 2013 roughly two-thirds of graduates borrowed.

The average borrower is also taking on more debt; balance per borrower rose by 70 percent from 2004 to 2012, according to the New York Federal Reserve. A primary reason students are borrowing more, according to experts, is that college tuition has grown much faster than income—prompting fears of a looming "higher education bubble." From 2001 to 2010, average cost of attendance at four-year public institutions grew at more than twice the rate of wages. Meanwhile, states have pulled back funding for public universities and colleges—an average decrease of 28 percent from 2008 to 2012.

Why does the federal government fund higher education?

But while high college graduation rates have traditionally given a competitive advantage to the United States, other nations are catching up. In 2013, the Organization for Economic Cooperation and Development ranked the United States fifth in attainment among 25–64 year-olds for tertiary education—bachelor’s and associate degrees as well as other training programs lasting at least two years—but just twelfth among 25–34 year-olds.

Without federal assistance programs, postsecondary education would be beyond the reach of many, especially the economically disadvantaged. Fully private student loans [PDF] often require a qualified cosigner because most high school graduates have limited to no collateral, credit history, or work experience.

Beth Akers, a fellow at the Brookings Institution’s Brown Center on Education Policy, told CFR, "Public student loans are often thought of as a subsidy, but they are correcting for a market failure, and are a critical part of the student aid system."

How valuable is a college degree?

As the chart above indicates, private return on investment in tertiary education in the United States is also significant. In other words, most U.S. students have tremendous incentive to pursue higher education despite loan costs. The OECD estimated private return on tertiary education to be $364,847 for U.S. men (first of twenty-seven nations) and $185,848 for U.S. women (second of twenty-seven nations).

Meanwhile, a 2011 Georgetown study found similar benefits: median lifetime earnings for an individual with a bachelor’s degree were roughly $1 million more than those of someone with only a high school diploma.

This data explains why colleges face high demand despite rising tuition. However, analysts caution that returns can vary widely depending on a number of factors, including a student’s major, institution attended, and personal attributes. To this point, the U.S. Department of Education is trying to help students make a better-informed choice by calculating the net cost for tuition at many schools.

As Akers explained, while there is talk of a student loan crisis, it perhaps is only a crisis for a portion of borrowers, as "the average returns to education are positive after taking borrowing into account; it can’t be the case that the majority of students are struggling as bad as some suggest."

What are the criticisms of federal involvement in student loans?

Most economists agree that higher education has both strong public and private returns, but debate continues over the extent to which the government should intervene in the marketplace. In a perfect market, public returns should be equal to private returns [PDF]. According to the OECD, "this implies that the rate at which revenues from additional schooling (higher wages) are taxed should be set exactly equal to the rate at which government subsidizes the cost of education." In the United States, private returns are much higher, indicating too heavy a government subsidy.

However, analysts note that markets are, in reality, imperfect, and that, for instance, greater subsidies can and often should be used by policymakers to account for some students undervaluing the future rewards of education (irrational risk aversion). The OECD notes that countries like the United States call for further study. "Large discrepancies between private and public returns should prompt additional analyses to assess whether government tax schemes or subsidies are strongly distortionary."

Other critics of the current U.S. system argue that loans largely benefit middle-class students, and that a better way to help needy students would be targeted grant programs. Several dozen colleges have increased grants to low-income students while eliminating or capping loans.

Some education finance experts say the increase in federal student aid is contributing to tuition inflation and actually making college less affordable for many. William J. Bennett, former secretary of education under George H.W. Bush, reflects on the economics of federal student lending then and now: "Much like the effects of subsidies on health care and the housing market, increasing student aid was insulating colleges from having to make market-driven cost-cutting measures, like improving productivity or efficiency. It appears that this may still be true today."

How are larger loans affecting students after school?

Rising tuition helped saddle a generation with higher debt just as many graduates struggle to find well-paying jobs. Two-thirds of the class of 2011 [PDF] graduated with student loan debt, averaging $26,600 per graduate, up from $18,650 in 2004. A 2012 survey found 9.4 percent of young college graduates were unemployed—adding discouraged workers and part-time workers shows an underemployment rate of 19.1 percent—while 37.8 percent had jobs that did not require a college degree. Still, analysis shows that the employment predicament of those with only a high school diploma is far worse.

Others note that significant student loan burdens often make it more difficult to borrow for major purchases. Over at least the past ten years, thirty-year-olds with student loan debt had a higher rate of home ownership than those without, but that trend reversed in 2012. Those with student loans are also no longer more likely to take on auto debt. These trends have a significant drag on economic growth, according to recent reports. "Three-fourths of the fall in household formation can be directly correlated to student debt," said Rohit Chopra, student loan ombudsman at the Consumer Financial Protection Bureau in October 2013. The United States is adding only 700,000 new households each year, roughly half the amount produced annually at the peak of the housing boom (2005–2006).

The burden of student loans may also affect the willingness of some graduates to take jobs in government or at nonprofits if there are more lucrative options in the private sector. To combat this potential brain drain, the CCRAA includes a program to forgive all outstanding federal student loan debt after ten years of public service.

This report from the OECD examines the state of education around the world, including learning outcomes and policy implications.

This CFR scorecard and progress report highlight the main challenges facing the U.S. education system and assesses whether federal education policy is effectively addressing them.