China announced that it added $130.6b to its reserves in the second quarter, only a bit smaller than the $135.7b it added in the first quarter.  Most of the increase was real: if China had 5% of its portfolio in yen and 20-25% in euros and pounds, valuation gains only explain $2b of the increase; if China had fewer yen and more euros and pounds, valuation changes could account for maybe $5b of the $130b increase.

Combine strong q1 and q2 reserve growth with China's tendency to run a larger current account surplus in the second half of the year and Stephen Green's forecast that China will add $500b -- if not a bit more -- to its reserves this year looks pretty good.

Some of the growth in China's reserves in both q1 and q2 likely comes from the unwinding of some long-term swaps the PBoC did with Central Huijin as part of the bank recapitalization.  Basically, some of the reserves that disappeared from the PBoC's balance sheet in 2003 and 2005 are returning.   Logan Wright (Survived Sars) estimates that this explains $10-15b of reserve growth per quarter.

The unwinding of some short-term swaps and the repatriation of offshore bank IPO proceeds have also contributed to the very strong pace of reserve growth. Chinese residents bought about over $100b in foreign debt in 2006, and, as Denise Yam and Qing Wang note, this flow came from state institutions and likely came from state institutions playing with funds borrowed from the PBoC.  Some of those loans -- structured as swaps -- may not have been rolled over.

Consequently the pace of China's foreign asset growth -- properly defined -- hasn't really doubled from 2006.   But it has picked up.  And it has reached truly unprecedented levels.

I doubt this quarters' data will change the minds of those who are convinced that the RMB isn't really undervalued.  However, it should by now be clear that the current RMB -dollar exchange rate isn't a market outcome either.

Many are convinced that changes in the RMB/ $ won't have much of an impact on trade flows -- not in the short or the long-term.   But it now seems pretty clear -- at least to me -- that so long RMB's real value isn't allowed to change (yes, the RMB has appreciated against the dollar, but the dollar has depreciated against most other currencies) the best forecast is more of the same.

Here are a few things to mull over:

1/  China’s current account surplus, on current export and import growth trends, looks set to rise to around $370b in 2007 – up from $70b in 2004.    It is rising by about $100b a year.   Barring a change in Chinese policy, a recovery in the dollar that allows China’s currency to appreciate in real terms in the absence of a change in policy or a major "safety" induced backlash against Chinese products, it isn’t obvious that this will change.   I used to think that China’s export growth would have to slow as the base got larger.  But that is no longer obvious to me.   China’s export growth actually accelerated at the end of 2006, after seeming to slow for a while.  Unit labor costs in China are still falling; wages haven’t kept up with productivity growth.   China is getting more cost competitive, not less -- especially in Europe.   And it is moving into new industries, like car parts and increasingly cars.

3/ Chinese reserve growth over the past four quarters is close to $400b.   I usually do a lot of fancy adjustments to the data to account for swaps with the banks and similar things, but my adjustments for the second half of 2006 (when reserves were shifted to the state banks through swaps) basically offset my adjustments for the first half of 2007 (when various swaps were unwound).    To keep a 70-75% dollar share in its portfolio over this period, China would have needed to buy close to $300b in US debt.   To hold the share of U.S. Treasuries and Agencies in its portfolio constant, it would have needed to buy roughly $225b of US debt over this period.    Because the US “flow” data tends to understate Chinese purchases (and overstate UK purchases) the full extent of Chinese financing of the US won’t become apparent until the survey data for mid-2007 is released next spring.   If the trend of the first two months of q2 holds for June, the TIC data will only show $21b of net Chinese purchases of US assets in q2 -- less than 20% of its reserve growth.   That is way too low.

Even so, total recorded Chinese holdings of US debt in the data now are close to $855b, and China's real holdings are likely close to $1 trillion.  Remember the TIC data has understated Chinese purchases for close to $90b for each of the last two years, and Chinese reserve growth was far stronger over the last four quarters than it was from mid-2004 to mid-2005 or mid-2005 to mid-2006.  The annual revisions show up clearly in the following graph. 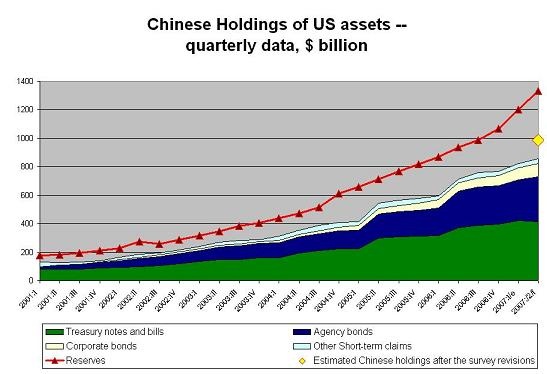 4/ If China’s currency is undervalued by between 25% and 50% against a basket of euros and dollars (and right now, it is probably more undervalued against the euro than against the dollar), China’s taxpayers are subsidizing – through China’s central bank --  Chinese exporters, American and European consumers and the American financial system costs Chinese taxpayers between $100b and $200b over the past year – or between 3% and 6% of Chinese GDP.     China’s subsidy of US consumption and the US financial sector – assuming $300b in Chinese purchases of US debt with an expected loss of between 25% and 50% -- is between $75 and $150b, or between 0.6% and 1.2% of US GDP.    That kind of subsidy is certainly influencing the composition of US output – favoring those sectors that generate the debt that is sold to China while penalizing those sectors that produce goods that compete with China – as well as the composition of US employment.

5/ Those who defend China's current exchange rate policies are essentially defending a world where China's government -- whether SAFE, the CIC, or banks conducting "policy-led capital outflows" --will control a substantial share of the world's total savings, one where China's government will be the largest single player in the fx market, the US bond market and potentially the equity market.   I don't see any particularly strong reason to think that China's foreign asset growth will fall from its current level of around $500b unless something changes.

6/ China has been far more successful at keeping its rapid reserve growth from spilling over into rapid money growth – and the kind of inflation that say the Gulf is experiencing – that I ever expected.   The 2004 paper I wrote with Nouriel clearly underestimated China’s capacity for sterilization.  But there are now signs that China’s rapid money growth – and rapid asset price inflation -- is starting to spill over into consumer price inflation.

7/ China has been able to limit inflationary pressures by increasing government savings – Jon Anderson reports that a large unspent fiscal surplus deposited at the central bank has been the primary vehicle for sterilizing China’s May and June reserve growth – and by restricting bank lending and forcing the banks to buy sterilization bills at low interest rates.  Yu Yongding  – a former member of China’s monetary policy committee – notes that such a policy has a cost: low yielding sterilization bills account for a larger and larger share of bank assets.   The costs of sterilization have been held down by holding down bank profits – and holding down (heavily controlled) interest rates on deposits, and thus the real return on a lot of Chinese savings.  There may be another cost as well: Dr. Yu thinks Chinese banks are also trying to offset the lack of income on their sterilization bill portfolio by taking more risks on their lending portfolio – including by lending for stock market speculation.   Artificially low deposit rates also give firms an incentive to put their free cash into the stock market ...

8/ Some still argue that if China’s capital controls were loosened, the RMB would fall.  I am pretty sure we will never know.   China isn’t about to lift its controls, stop intervening and see what happens.  But we do know that China is continually tightening controls on inflows while loosening controls on outflows.  The surrender requirement on export proceeds was recently dropped, for example.  However, loosening controls on outflows doesn’t seem to have made much of a difference: right now, Chinese savers want appreciating RMB not depreciating dollars.   Moreover, with a $350-400b current account surplus (on current trends) and $50b or so in net FDI inflows, there would need to be a $400-450b annual private capital outflow from China right now just to keep the RMB from rising.   A 10% of GDP capital outflow (think $300b) would lead to a financial crisis in most emerging economies.  In China, it wouldn’t be enough to prevent the RMB from rising in the absence of central bank intervention.

Many argue that China’s savings surplus – and thus its trade surplus – is structural.   That seems to me to be an increasingly difficult argument to make.  I can see a structural explanation for China’s comparatively high rate of household savings (though China’s household savings rate is no higher than India’s).   But I have a hard time finding a structural explanation for the recent rise in Chinese savings – a rise that has to be large enough to cover a major increase in China’s savings (i.e. current account) surplus at a time when Chinese investment is rising strongly.   I also find it hard to square “structural” explanations for China’s trade surplus with the enormous, ongoing changes in the structure of China’s trade.   China used to run a surplus with the US that was largely offset by a deficit with the rest of Asia.   Now it runs a large surplus with both the EU and the US, and its deficit with Asia – at least Asia ex Japan – is falling.

That, incidentally, is my critique of the latest BOE paper, which is being spun as evidence that yuan revaluation will cut into the rest of Asia's exports to China, and thus slow their growth -- mitigating the overall impact of yuan revaluation.  But the latest data points in the study seem to be 2003 and 2004 -- which is just before the structure of Asia's trade with China started to change.   The correlation between Chinese exports to the world and Asian exports to China started to change in 2005, as both the World Bank (see p. 9) and the IMF have noted. Chinese made parts have already displaced  Asian-made parts in a lot of China's exports. The RMB isn't just undervalued against the dollar.  It is also undervalued against much of the rest of Asia ...