Some no doubt will take a revival of interest in a set of 2004 and 2005 papers (Rogoff-Obstfeld,  Krugman, Roubini-Setser, no doubt others) arguing that a real depreciation in the dollar is needed to correct the trade deficit as a clear sign that the dollar is over-sold and due for a rally.

However, the dollar's fall isn't just a late 2007 story -- or even a post 50 bp Fed cut story.  The dollar has been sliding pretty steadily against the euro since early 2006.

And there is good reason, at least in view, to expect broad dollar weakness to persist for some time.   While the dollar quite weak against the major currencies, it isn't that weak relative to the emerging world.  The broad dollar only just returned to its 1996 level.  Sustained adjustment likely requires that the dollar fall a bit below that level.

So what is different from say late 2004, when there last was a burst of concern about the dollar?

It will be interesting to see if sustained $80 a barrel oil offsets the improvement in the non-oil balance in the tail end of q3 and in q4.  A $1 increase in the price of oil over the course of the year increases the US oil import bill by about $5b – so there is a big difference between the $60 a barrel average price for sweet light crude in q1 and the $75 average in q3.

However, there is no question that the bilateral deficit with Europe is falling particularly quickly.   Back in 2004, an economist at a large German auto maker indicated that, given productivity differentials between the firm’s German and US plants, it only really made sense for German car makers to produce in the US if the euro was above 1.3.   I don’t think it is an accident that the Germans are starting to rev up their US production while the ratio of Japanese cars manufactured in the US relative to Japanese cars sold in the US continues to slide …

The fall in the non-oil trade deficit though isn't a dollar positive -- not when the trade deficit is falling because the US is growing less rapidly than the rest of the world.   That undercuts the attractiveness of US financial assets.   Throw in the fact that the United States supposed comparative advantage in financial securitization technology doesn't seem like much of an advantage right now -- no one currently is willing to pay a premium for a CDO stuffed with tranches of US subprime mortgage-backed securities – and there isn't sufficient private demand for US assets to cover the US deficit.

The official sector doesn't finance the US because it particularly wants to; it finances the US because a number of countries still prefer financing the US to letting their currencies appreciate.That is actually rather similar to 2004 -- particularly the fourth quarter of 2004 when intervention by emerging economies spiked up.

But  there is another key difference.   Right now, the interest rate differential isn’t moving in the dollar’s favor.  David Woo of Barclay’s Capital thinks the US/ Euro rates differential is already too small to lend much support to the dollar.  And if the Fed continues to cut and the ECB doesn't, well --  the interest rate differential might turn against the dollar.   The Homeland Investment Act isn’t poised to generate a $200b capital inflow (and a boost to the dollar, as some funds held offshore weren’t in dollars) in 2008.    The trigger for renewed private demand for dollars isn't obvious.

Ken Rogoff provides another reason to expect dollar weakness to persist: the slowdown in US productivity growth.   That makes sense.

Ramin Toloui calculates that the oil exporters need to keep around 60% of their assets in dollars for a rise in oil prices to be dollar positive.   They probably aren’t doing that.  More spending and investment in the oil-exporting economies also isn't a dollar positive: the dollar's share of the oil-exporting economies financial portfolio certainly tops the United States share of their import portfolio.

Incidentally, there seems to be new interest in a paper I wrote earlier this year  for the Peterson institute on oil and global adjustment.   It doesn't focus explicitly on the oil/ dollar link: I wasn’t as convinced then as I am now that the GCC investment funds had cut the dollar share of their portfolio.  But it does provide at least one way of thinking about how higher oil prices will influence the global flow of funds.

All this said, the 2004 Roubini-Setser paper on the US as a net debtor clearly got two key things wrong.

First, it argued that the net international investment position (NIIP) of the US and the income balance were both poised to deteriorate significantly.   Neither has happened.   One of the arguments for why the NIIP would deteriorate was that the dollar wasn’t going to fall against the euro at the same pace as in 2003, so there would be smaller valuation gains going forward.   We didn’t anticipate the outperformance of European equities relative to US equity markets would deliver valuation gains even in the absence of a big fall in the dollar (remember the end 2004 “valuation” for US investment in Europe was based on an exchange rate of 1.35 or so, so even a dollar at 1.41 doesn’t produce big valuation gains).

The willingness of foreigners to finance the US even as US markets under perform markets abroad is a real puzzle – one only partially explained by the actions of the world central banks.   Those central banks that reduced the dollar share of their reserves back in 2004, 2005 and 2006 have done better than those that didn’t.

Second, the 2004 paper argued that the world’s central banks wouldn’t continue to finance an expansion of the US current account deficit – and a lack of financing in turn risked causing a slowdown in the US economy to slow.   The casual relationship actually seems to have been the opposite.  The US economy slowed because of an overbuilt housing sector (particularly given limited median real wage growth) rather than because of a shortage of foreign financing.

And that hasn’t happened.    The same pressures that pushed the dollar down against the euro are present elsewhere.   But that pressure shows up in the reserves data far more than in the exchange rate.   Consider the following chart: 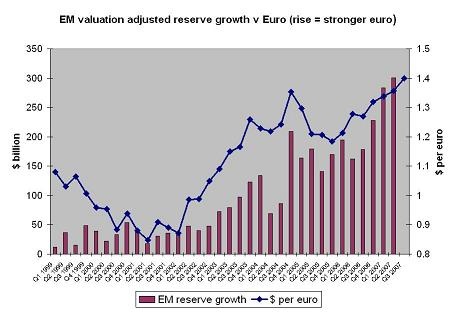 By now though, you can make a reasonable case that the pace of emerging market reserve growth has reached the point where its costs exceed any reasonable estimate of its benefits – which suggests that emerging economies might begin to allow their currencies to appreciate.

But a lot are not perched on such a steep gradient that they cannot let go of the brake without really zooming downhill (or perhaps uphill – as they would rise, but then the metaphor doesn’t really work).   A controlled descent on a very steep gradient requires using the brakes.   And in this case, the only brake in the system – barring a surge in private demand for dollar assets – is emerging market central banks’ willingness to increase their reserves to control the pace of appreciation of their currencies.

To stretch the metaphor a bit more, a dollar plunge could happen in one of two ways – if emerging market central banks decided to stop using the brake of intervention to control the dollar’s descent, or if they burn out the brakes trying to control the descent.    The gradient is now so steep that I would be very surprised if emerging market central banks didn’t try to use the brake – but the road down is now long and steep enough that the odds that the brakes might burn out has increased.

Stephen King – of HSBC – seems to be getting increasingly worried that emerging economies might conclude that it no longer is in their interest to prop up the dollar, or to use my earlier metaphor, that the inflationary heat from trying to control the pace of the dollar's descent through central bank intervention may prompt policy change.

Falling US interest rates would make the control of inflation even more difficult within the emerging world, eventually increasing the temptation to "go it alone" and leave the dollar to its own destiny. Might this lead to a dollar collapse, a loss of US monetary credibility and the end of an economic pax Americana?

Perhaps this is a fairy-tale too far. I sense, though, that recent events are not a one-off ... Instead, the story unfolding is one full of sub-plots, geographical intricacies and economic dependencies. It may finish happily ever after. But it might, instead, end up like one of those novels from my namesake, a horrific mixture of weak growth, sticky inflation and, ultimately, a loss of confidence in the dollar's status as a reserve currency.