Dubai is rather frothy. Landon Thomas of the New York Times reports that rents are up 40%. New supply has to be coming onto the market, but I guess it has yet to catch up with demand. And it isn’t hard to see why. Oil is -- thankfully -- off its recent highs. But at close to $130 a barrel, it is still well above its average 2007 price of around $70 a barrel.

The rise in prices between 2008 and 2007 has, obviously, come a lot faster than the rise in prices from say 2003 to 2007. The following chart* shows the estimated export revenue of the world’s major oil exporting economies as a share of world GDP if oil averages $120 a barrel this year. An average price of $120 a barrel requires $130 oil for the remainder of the year. 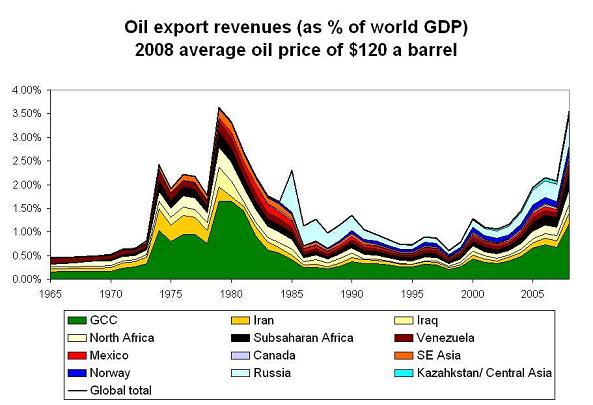 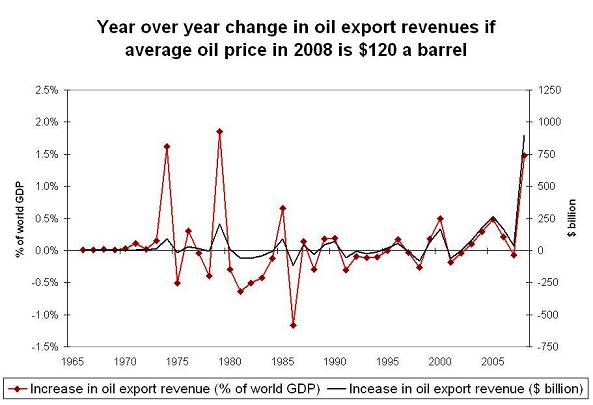 This calculation assumes that the oil exporters will export about 45 million barrels a day of oil.

I consequently was a bit slow putting this post up. If I had put it up a few days ago, I could have talked about the "Trillion dollar oil shock." I learned the value of a catchy headline last week.

* Gaurav Tiwari of the Council on Foreign Relations helped gather the data for this chart. It is based on the BP data for oil production and consumption. Net exports is the difference. I used BP’s prices as well -- which likely overstate oil revenue somewhat. But the biggest problem with the data series comes from Russia. BP only has data on Russia from 1985 on. And it almost certainly is the case that Russia didn’t sell its oil at the average world market price until after the Soviet Union collapsed. If any reader has a good suggestion for how to incorporate Russia more smoothly, please let me know. I also would appreciate advice on the average discount that should be applied to the price of sweet light crude to get a better estimate of oil export revenue.

So a Gulf sovereign fund still has 60% of its assets in dollars? And SAFE is a SWF ...