For a long time, large US trade and current account deficits didn’t push up the total amount the United States owed to the world, at least not if the market value of US investment abroad was netted against the market value of foreign investment in the US. The net international investment position of the US stayed around negative $2 trillion even as the US chalked up $500 billion, $600 billion even $700 billion annual deficits, defying those who projected that rising deficits would put the US external debt on an unsustainable trajectory.

Why? The euros’ rise pushed up the value of US investments in Europe. The US external position actually benefits from a falling dollar, as most US liabilities are in dollars while many US assets are not. And foreign equities did better than US equities.

Those who argued that the US was attracting funds because it was the best place in the world to invest generally forgot to note that during the period when the US deficit was rising the US was consistently doing better on its investments abroad than foreigners were doing on their investment in the US.

Combine those valuation changes with ongoing US borrowing and the net international investment position deteriorated in a rather dramatic fashion. The US NIIP -- the blue line in the following graph -- deteriorated by $2.5 trillion if FDI is valued at market prices. 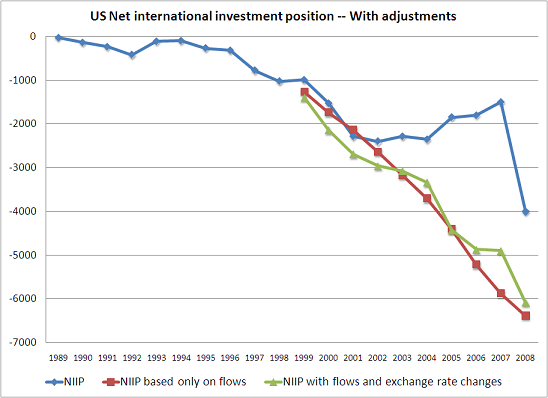 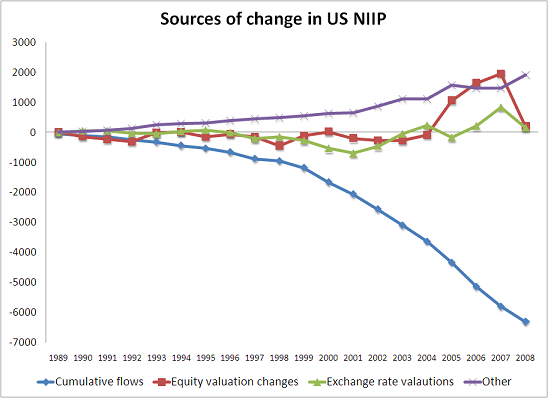 The main reason why the net international investment position isn’t worse than it is? The cumulative impact of something called "other changes." William Cline has called these “other” changes – effectively accounting changes to reconcile the data on financial flows with the data on the stock of US and foreign investments – statistical manna from heaven. He is right. Without these changes, the US net international investment position would be much, much worse.

One quick aside: If FDI is valued at cost rather than at market value, the US net international investment position deteriorated by only $1.3 trillion. It would have been close to the $2 trillion Gian-Maria Milesi-Ferretti predicted if not for a mysterious $420 billion in “other” changes.

There are a couple of other ways of looking at the net international investment position data. One is to disaggregate it into a net debt position and a net equity position -- i.e. netting US lending against US borrowing, and US equity investment abroad against foreign equity investment in the US.

Foreign central banks – setting aside “other foreign assets” a category that includes a lot of equities – hold about $3.5 trillion of US debt. Even after the extension of $530 billion in swap credit, the US government only has about $700 billion in claims on the rest of the world. The net position of central banks on the US therefore mechanically accounts for the majority ($2.8 trillion) of the world’s net holdings of US debt. That is why there is so much focus on the ongoing willingness of central banks to hold US debt.**

Another little tidbit in the US data: Official investors lost $13 billion on their US investments due to market moves. Private investors by contrast lost $1.22 trillion. They are the ones who should be smarting.

Conversely, the market value of “other” official assets – a category that includes the equities and corporate bonds that are held by central banks and sovereign funds (at least those that show up in the US data) – fell in value of $161 billion. That is roughly a 30% loss.

No surprise. But it is kind of ironic that all the angst this year has focused on those parts of central banks portfolio that held up well last year.

China clearly accounts for some of the $161 billion in equity losses – as China (SAFE in my view) bought a large number of equities in the second half of 2007 and the first half of 2008. But I would guess that China accounts for a larger share of the mark-to-market gains on central banks’ bond portfolio than of the losses on central banks and sovereign funds’ equity portfolio. Its overall portfolio held up rather well – all things considered – during the crisis.

I feel a bit guilty for pointing out the large losses China (and others) took on their large equity purchases just before the crisis hit. In aggregate, central banks went into the crisis with a portfolio that was heavy on government bonds – and that portfolio did well.

One last set of points -- on the academic debate over the United States’ exorbitant privilege and its skill at generating "dark matter" to offset its ongoing trade deficits.

Technically the rise in the US net international investment position doesn’t disprove the dark matter thesis.

The income balance (positive, thanks to income on US FDI abroad) implies, according to this methodology, that the US has about $2.4 trillion in (net) assets, while the NIIP (using FDI at market value) shows $4 trillion in net US debt. Presto, $7.4 trillion in dark matter.

Of course, the argument that dark matter represents US skill at investing abroad – skills that lets the US collect risk premia on those investments – is hard to sustain in a year marked by epic losses of US investment abroad. $2.7 trillion in losses without counting direct investment, close to $5 trillion if mark-to-market losses on direct investment are factored in.

Mechanically, a fall in interest rates increases the amount of dark matter, since the Hausmann and Sturzenegger methodology assumes that the US should be paying 5% on its net debt position, and credits the US with dark matter if the interest rate on US net debt falls below 5%.

And I still think that the gap between the returns on US direct investment abroad and foreign direct investment abroad – a gap that stems entirely from exceptionally low reported earnings on foreign investment in the US (especially low reinvested earnings) – is a function of tax laws that allow US firms to avoid taxes on profits abroad that are held abroad. European and US firms both have an incentive to show profits in low tax jurisdictions in Europe, not the US. That is one of the dangers of inferring assets from the income balance!

NOTE: I edited the middle portion of the post significantly on Saturday to clarify the graphs. My initial post was rather cryptic. I hope the edited version works a bit better.

*Technically, the is net financial flows, so equity investments enter in as well. In practice though it was almost all debt. Treasuries actually.

** All these calculations are a bit rough. I rushed a bit – and reserve the right to refine them as I feed more data into my spreadsheets.

Near-record growth in the custodial holdings at the Fed; ongoing angst about the dollar’s role as a reserve currency ...