This is a guest post by Diptesh Soni. Diptesh is currently a consultant in UNICEF’s public advocacy section and a recent graduate of the Columbia University School of International and Public Affairs (SIPA). The views expressed below are his personal views and do not reflect those of his employer. You can follow him on twitter at @dipteshpsoni.

A recent report by the United Nations Children’s Fund (UNICEF) forecasts that if current trends persist, one in every four people on the planet will be African by the year 2100. Even accounting for a decline in fertility brought on by greater prosperity, UNICEF predicts that by 2050 alone, the number of Africans under the age of eighteen may swell to around one billion. The report concludes that more emphasis must be placed on access to reproductive health services, girls’ education, and vital statistics systems. 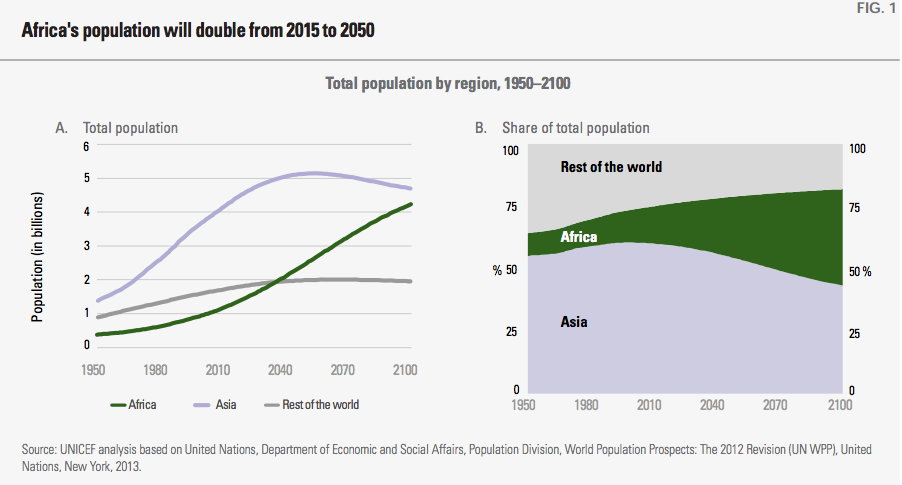 Such numbers should inform development strategies and common perceptions on the African continent.

The notion of a “demographic dividend” in Africa seems largely misguided, and should not be passively viewed as inevitable. The dividend arises when fertility rates fall due to better health outcomes, but this process has been slow to arrive in Africa. Some claim that a large pool of labor can provide an engine of growth through expanded light manufacturing, but the fact is that African labor markets are currently unable to absorb a vast and growing supply of workers. With some notable exceptions, low-wage manufacturing jobs have remained in Asia and the steady growth in labor saving technology also bodes poorly for a manufacturing revolution in Africa, all while service-led growth has severe limitations.

Education must be made a key priority for donors and governments across the continent. Although school enrollment for children in Africa has improved significantly in absolute numbers over the last two decades, these gains have been undermined by the steadily increasing population (see chart below). 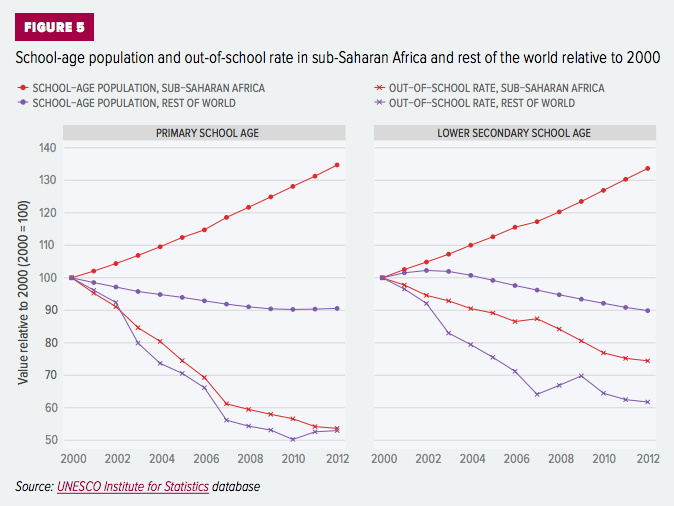 Evidence abounds that investments in education, especially when targeted towards girls and women, help develop a productive and resilient workforce. Recent studies from the Center for Global Development in Washington, DC, reinforced by Nobel laureate Erik Maskin of Harvard University, show that investing in quality education can boost skills development and reduce in-country inequality.

No country exemplifies the challenges and ambiguities of demographic and economic growth like Nigeria. News of Nigeria overtaking South Africa as the largest economy on the continent was met with much excitement. However, with a rapidly growing population of almost 180 million and an adjusted GDP per capita less than one fifth of South Africa’s, Nigeria is desperately poor by any measure. Its economy remains dependent on oil exports and much of the new foreign investment ventures are directed at tapping the growing market for fast-moving consumer goods, rather than expanding labor absorbing industries.

With little economic diversification and a weak education system the chances that Nigeria’s youth of today or tomorrow will find productive employment and sustainable livelihoods are reduced. A population that is both underemployed and undereducated breeds an environment of discontent that can provide a large recruitment base for extremist groups like Boko Haram.

The Ebola crisis has shown that problems of poverty are not beholden to national boundaries. If African governments, their donors, and their private sector partners do not adapt strategies to mitigate the dangers of demographic explosion, future generations of Africans and non-Africans will be much worse for it.