That is the conclusion I have reached after spending a fair amount of time looking at China’s data, and nearly as much time trying to understand the (incomplete) data from the Gulf. The data from China’s 2008 net international investment position -- English data through 2007 here -- certainly didn’t prompt me to change my mind.

If China’s own reporting is to believed, China’s state likely has about $2.4 trillion in foreign assets -- setting the CIC aside. $1.946 trillion in formal reserves. $252 billion in portfolio debt (likely held primarily by the state banks, though some may be stuffed in other accounts). And $186 billion in a mysterious line item that corresponds with the banks dollar reserve requirement and the PBoC’s other foreign assets (see below). Add in the CIC (which likely has another $50-100b in assets scattered across various balance of payments categories) and China’s net international investment position (NIIP ) data suggests that China’s investment in the world -- even excluding FDI by Chinese state firms -- is now close to $2.5 trillion. 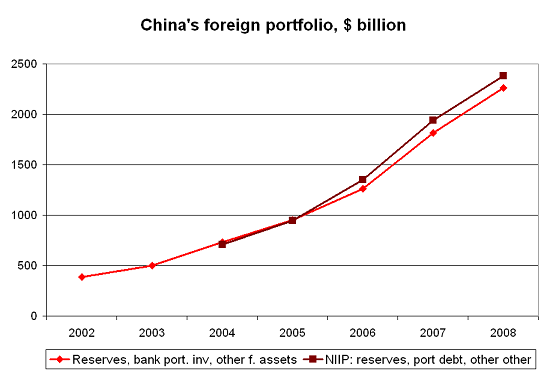 That is a bit higher than I estimated. Data in China’s NIIP -- just looking at the cateogies that capture formal reserves and the state banks and thus excluding any additional assets held by the CIC -- suggests that China’s state has foreign assets of around $2.384 trillion at the end of 2008. That is more than the $2.261 trillion I found by adding up China’s reported foreign exchange reserves, the PBoC’s other foreign assets and the reported foreign portfolio investments of China’s state banks. The gap in entirely due to the fact that Chinese holdings of portfolio debt in China’s net international investment position ($252b) far exceed the portfolio investments of the state banks that the PBoC reports on its website ($131b).

The change in the reported stock of foreign investment in China’s NIIP also is interesting. Remember that the euro’s rise in 2006 and 2007 pushed the reported value of China’s reserves up, and the euro’s fall in 2008 pushed the total value of China’s reserves down -- so the 2006 and 2007 numbers will tend to overstate the true growth in China’s reservse and the 2008 number understates the true growth in China’s reserves.* No matter. In 2006, "private" Chinese investors clearly bought a lot of portfolio debt (the organge bar). In 2007 and 2008, other investment "other" rose rapidly -- a function of the rise in the banks reserve requirement (see the blue bar). Other investment is balance of payments speak for bank flows. And even setting the banks reserve requirement aside, China’s net position in the international banking system improved in 2008 (see the pink bar). I suspect that reflects the CIC’s deposits in the international banking system. 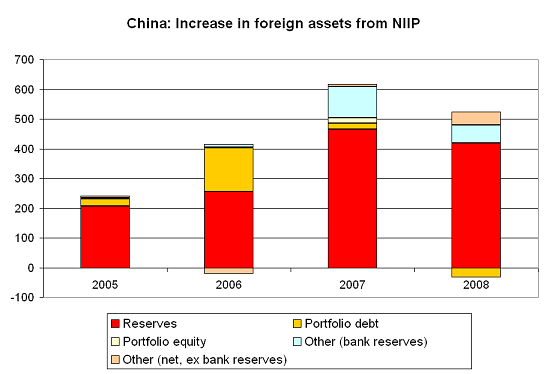 When I tried to match up the data I use in my monthly tracking to the data in the annual NIIP (focusing only on the categories that match up -- which means that I set aside the CIC), the data lines up reasonably well for all years other than 2006. That was the year when private Chinese investors bought a ton of foreign debt -- way more than shows up in the state banks’ foreign currency balance sheet. 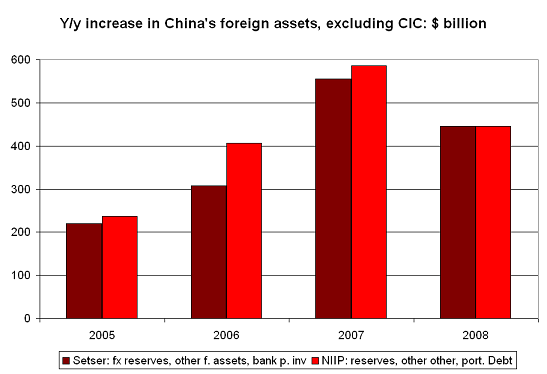 That doesn’t worry me too much though, as I have long suspected that the data series I was using understated China’s accumulation of foreign assets in 2006.

The NIIP data also makes a few other things clear.

One, over the last three years, China’s reported reserves have significantly understated the increase in the foreign portfolio of China’s state, at least if China’s state banks are considered part of China’s state. In 2006, purchases of foreign debt securities topped $100b. In 2007, "other, other" -- read the dollar deposits of the state banks -- rose by about $100b. And in 2008, the ongoing rise in the reserve requirement and the CIC’s various foreign assets likely added another $100b or so to the total.

Two, outward Chinese FDI is still small relative to Chinese reserve growth, and the increase in China’s hidden reserves. The roughly $50b that Chinese firms invested in the rest of the world in 2008 is still smaller relative to the increase $500b that China’s government put into its reserves and other foreign assets -- a total that rises after adjusting for transfers to the CIC and valuation changes that make the y/y change in reported holdings an inaccurate measure of the flows. A world where all the increase in China’s foreign assets was channeled through Chinese state firms would look quite different than today’s world.

Three, the rise in China’s foreign assets (counting China’s reserves, its "private" purchases of foreign portfolio debt and the bank reserve requirement) has far outstripped the rise in China’s foreign debts (defined as Chinese debt securities held abroad and bank claims on China). China really didn’t need to run its reserves and hidden reserves up to close to $2.5 trillion for prudential reasons. 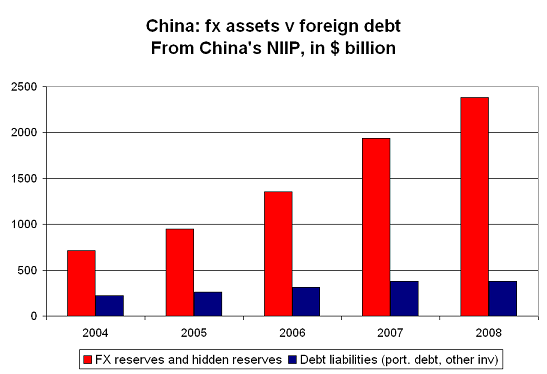 As Geoff Dyer reported in an important article in Friday’s FT -- it also has put China’s government in something of a bind. China’s population, it seems, isn’t quite as keen to lose money subsidizing China’s exports (by building up costly unneeded reserves) as China’s government. Yet -- as Jamil Anderlini reports in Monday’s FT -- China has kept on buying Treasuries.

That harldy seems sustainable, but it is an accurate description of the world we now live in.

Truely wonky details, mostly for my own records.

China’s total foreign assets now total $2.9 trillion, v foriegn liabilities of $1.4 trillion (mostly as a result of foreign direct investment in China). I have set aside those line items that reflect private flows -- or the activities of China’s non-financial state firms, as well as those line items that reflect private investment in China. I wanted to isolate the financial activity of China’s state, broadly defined and thus the analysis in the above post focused on those line items of China’s NIIP that are mostly likely to correspond with the monthly data series I use to estimate China’s foreign assets. 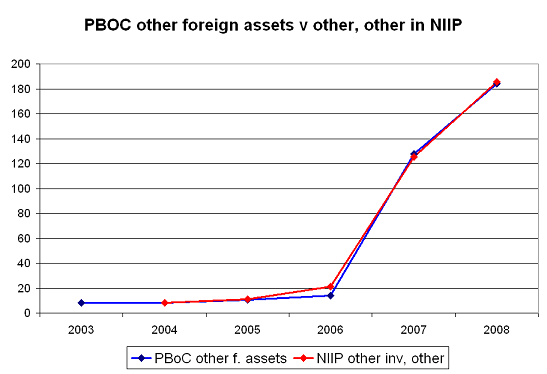 The match between the state banks holdings of foreign portfolio investment -- reported by the PBoC -- and portfolio debt in the NIIP isn’t as good. 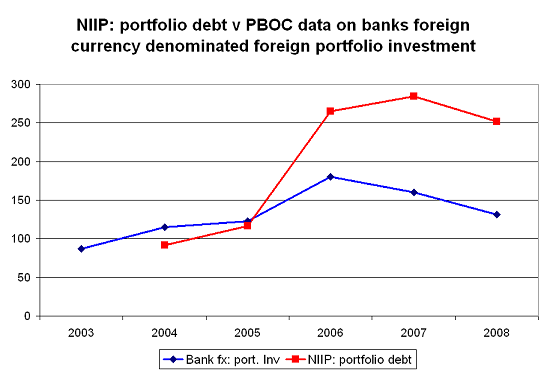 Other investors, including I would guess other state investors, must have a larger foreign portfolio. Either that of the PBoC’s data doesn’t pick up all of the holdings of the Hong Kong branches of the state banks.

The fact that Chinese investment in global equities ($21b at the end of 2008) in China’s NIIP is far smaller than China’s reported holdings of US equities in the US data (close to $100b at the end of June 2008) supports by earlier argument that SAFE bought large quantities of equities in 2007 and 2008. SAFE’s equity holdings would be part of China’s reserves in China’s NIIP; they wouldn’t be reported seperately.

All told, the NIIP data suggests that the data I have been using understates China’s portfolio by around $100 billion or so. It also leaves no doubt that China’s true foreign portfolio is far larger than $1.95 trillion.

Thanks to reader MMcM for alerting me to the release of China’s 2008 NIIP data.