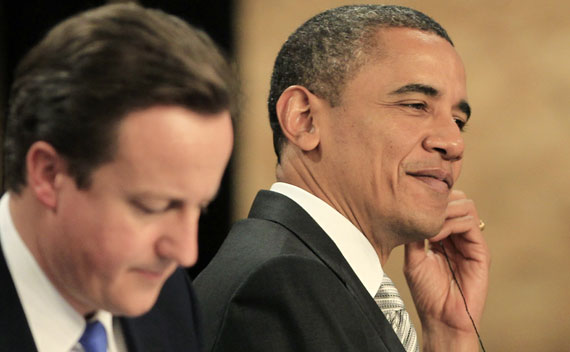 The diplomatic fallout triggered by the Wikileaks debacle has been front and center this week. The Times of London asked me to comment on what the leaked cables mean for the special relationship with Great Britain. My assessment, which appears in today’s edition of the Times, is reprinted below. You can read the op-ed on the Times’ website, but if you are not a subscriber it is a pay-to-read page.

November was a tough month for President Obama. It began with a “shellacking” in the US congressional elections. It ended with his Secretary of State, Hillary Clinton, spending the Thanksgiving holiday weekend on the phone apologising to leaders around the world for the imminent public release of thousands of unflattering State Department cables.

Nothing about the congressional elections was good news for the Administration. But the WikiLeaks fiasco does have a silver lining.

Julian Assange boasted that the purloined cables would expose “American hypocrisy.” What they showed instead is that American officials spend most of their time saying privately what they say in public.

Rather than pulling strings behind the scenes, American diplomats struggle to find common ground with foreign governments to solve shared challenges. That presumably is what a leading global power should be doing.

The other good news is that despite all the ink spilled on the WikiLeaks story no critical secrets have been revealed. More than half the 260,000 cables were, in the parlance of the US system of secrecy, routine, “confidential” items of low importance. None of the items were “top secret.” The WikiLeaks fiasco is not an intelligence debacle but a diplomatic embarrassment.

That is precisely what has set tongues wagging. The intricacies of uranium enrichment and missile defence may be difficult to grasp but everyone understands office politics and gossip. The leaked cables offer that in spades.

We should not be surprised that American diplomats relay private conversations and scuttlebutt back home. That is part of any diplomat’s job.

One of the foreign leaders who took Mrs Clinton’s phone call last week put the “scandal” in its proper context when he told her, “Well, don’t worry about it, you should see what we say about you”.

This is not to say that the leaked cables have not created some awkwardness. The Duke of York and Mervyn King must be dismayed to see their private comments now the subject of public commentary.

We can only wonder what David Cameron will be thinking when he next meets Mr Obama, now that he knows the President thinks he is a “lightweight.”

But the awkwardness will pass. Most politicians, or at least most good ones, live by Lord Palmerston’s maxim of having no permanent friends, only permanent interests.

Even if some resentment lingers between 10 Downing Street and 1600 Pennsylvania Avenue, close Anglo-US ties have never turned on the mutual admiration of their leaders. If it had, relations would never have survived President Lyndon Johnson’s disdain for Harold Wilson or President Clinton’s differences with John Major.

London and Washington have worked closely together for so long because they share common interests in a troubled world. Some leaked cables will not change that.

The real harm caused by WikiLeaks is different and far harder to gauge. British (and other) diplomats will be less candid when talking with their American counterparts. US officials will resort to more euphemisms when they report back home. Washington will further restrict who gets what information. None of this improves the odds of better policy choices.

Unfortunately, future WikiLeaks revelations are inevitable and Washington will not be the only victim. Anyone with access to critical databases and a thumb drive can filch a treasure trove of documents.

Mr Assange and his supporters may fool themselves with mindless chatter about transparency perfecting democracy. They are wrong. They have only made it harder for governments to do their jobs in a messy world.