One might be “Foreigners love US Treasury bonds.” Foreign investors bought $80 billion of long-term Treasuries in April, and another $3.3 billion of short-term bills for good measure. Anyone who really believes that private investors bought $58 billion of Treasuries (including $48.52b bought by investors in the UK) hasn’t been paying close attention to the data. These are almost certainly central bank purchases. For all the attention that sovereign wealth funds have attracted, the real story of the past year – in my view – has been a flight to safety by sovereign investors. That flight – while understandable – has added to the dislocation in the credit market, not reduced it.

Another might be “Americans priced out of foreign markets.” US investors sold $10.3 billion of foreign securities in April. They also sold $1 billion in March, and bought $13b in February. That implies zero net purchases over the past 3months. A more charitable headline would be that Americans are taking profits on their investments abroad, or that Americans are now finding value in their own financial assets. The fall in US demand for foreign securities is clearly dollar positive.

Another is that "China bought a ton of US debt." It bought $31.5b of long-term debt, while reducing its short-term holdings by $2.7b. That works out to $28.8b in net purchases – or enough to finance about ½ of the US trade deficit in the absence of any US capital outflows. The funny thing is that this almost certainly understates China’s true purchases of US debt. In the past few years, about ½ of the Treasuries purchased by the UK have been reallocated to China in the annual survey (see the June revisions to this series). We know that China’s reserves increased by about $80 billion (after adjusting for valuation gains) in April, so it is realistic to think that China’s true purchases of US assets were closer to $60 billion than $30 billion.

A final potential headline might be "the Gulf hires a magician to make its petrodollars disappear." They certainly vanished from the US data. Net long-term purchases by the Asian oil exporters were only $0.3 billion, and short-term holdings only rose by $1.2b – for a total inflow of $1.5 billion. The Gulf is probably running a monthly current account surplus of $25 billion (off monthly oil export revenues in excess of $50 billion). There is a lot of Gulf cash floating around that isn’t showing up in the TIC data.

Rather than telling these stories with words, though, I thought I would illustrate a few of the stories with graphs that Arpana Pandey of the CFR has prepared using the TIC data. She has combined the TIC flow data with the survey stock data to generate an ongoing estimate of the US debt held by key countries around the world.

Let’s start with a chart showing the evolution of the UK’s holdings of Treasuries and Agencies over time. 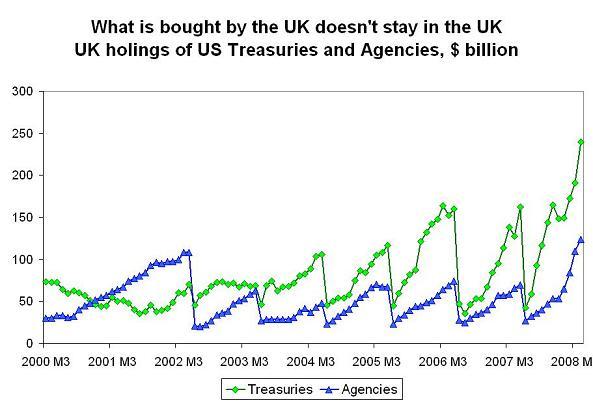 Note that the survey (which revises the June data) basically indicates that the UK’s real holdings of Treasuries and Agencies have been constant. The rise in the UK’s holdings that appears in between survey dates reflects the UK’s role as a financial center. Private banks in the UK buy Treasuries (whose purchase is recorded in the US data) and then sell those Treasuries to central banks (a transaction that doesn’t enter the US data). The large buildup of Treasuries and Agencies in the UK recently almost certainly reflects higher central bank purchases than recorded in the US data. Remember the enormous buildup of central bank claims at the Federal Reserve Bank of New York in April? The increase in the FRBNY’s official holdings in April was almost exactly two times larger than recorded central bank purchases in the TIC data for April ($67 billion v $34.1 billion in Treasury and Agency purchases). It is all due to London, more or less.

Now look at China. Arpana and I plotted China’s identified US holdings against China’s reserves and an estimate of China’s total foreign holdings -- as I agree with Goldman’s Hong Liang that China’s government, counting the state banks and the CIC, already holds close to $2.1 trillion in foreign assets. 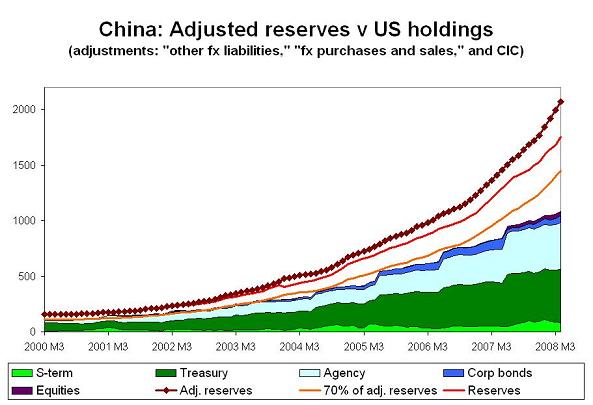 The US data indicates China holds $1,085 billion in various US securities. My personal view is that China actually holds far more -- at least $200 billion more. Look at the buildup of Treasuries and Agencies in the UK. Historically much of the buildup in the UK has been reallocated to China. And I increasingly suspect that some financial flows from Hong Kong really come from China.

As more and more institutions manage some of China’s foreign assets -- and as more use is made of external fund managers -- even the slow-to-appear-but-more accurate survey data likely picks up less of China’s total holdings. Over time China may become sort of like the Gulf - whose dollar holdings are understated in even the survey data. At least in my view. More on that later.

Finally, Russia. Arpana and I have plotted Russia’s reserves against its recorded US holdings. 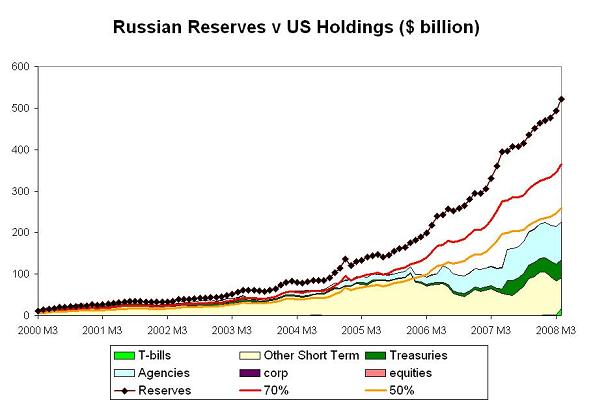 Here too the survey -- at least the 2007 survey -- has tended to revise Russia’s holdings up. Russia’s early 2006 diversification away from the dollar also shows up cleanly.

Russia clearly holds a much more conservative portfolio than China -- with far larger short-term holdings, virtually no corporate debt and virtually no equities. Until recently though it never held any Treasury bills. That though changed in April. It probably doesn’t mean anything. But it still caught my eye.