It is almost impossible to overstate the scale of China’s reserve growth.

Of course, some of the 2007 increase - a bit over $30b, according to my estimates - comes from the rising value of China’s existing holdings of euros. After adjusting for valuation gains, China added an estimated $427b to its reserves in 2007.

And to top it off, reserve growth understates China’s total foreign asset growth. It leaves out the CIC, for one. It also leaves out the dollars held by the banks, whether from recapitalization, swaps with the central bank or plain old arm-twisting to force the big state banks to hold dollars to meet the recent hike in their reserves. 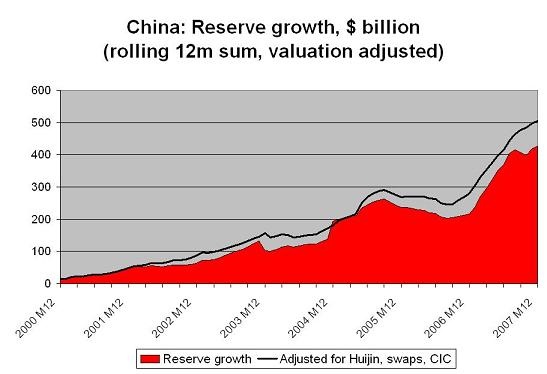 A conservative estimate of the increase in the bank’s holding would be about $60b -- $40b from the increase in what I believe to be the banks foreign currency liabilities to the central bank and CIC through November (as reported by the PBoC) and $20b from the late December recapitalization of China Development Bank.

A conservative estimate would put the CIC’s end-December holdings of foreign exchange at $16b. They bought $80b in fx from the PBoC in q3, but used $67b of that to buy Huijin’s assets. That meant a net increase of only $13b.

The CIC likely bought around $26b from the PBoC in q4. But $23b of that was used to recapitalize CDB and Everbright bank. The big influx of foreign exchange from its last 750 billion RMB bond issue is likely to arrive in early 2008.

And that may even be an underestimate.

The increase in China’s foreign assets in both Q3 and Q4 is suspiciously low.

Core inflows into China - the trade surplus, income on China’s existing foreign assets and FDI inflows - were close to $120b in the fourth quarter. The increase in China’s reserves in the fourth quarter, by contrast, was only around $87b once $7-8b in valuation gains are stripped out. The net increase in the CIC’s foreign assets wasâ€”if my math is right - only about $3b. The banks got another $40b, including the $23b CDB/ Everbright recapitalization. That works out to about $130b - or only a bit more than what would be implied by a conservative accounting of inflows.   I won’t go through the third quarter details here; they were covered back in December.

Sure, QDII outflows picked up - but they are still pretty small in the grand scheme of things: total utilized QDII quotas at the end of September were only around $11b. The same is true of outward FDI - and in any case the high-frequency measure of FDI typically has understated BoP FDI inflows.

All in all, a $130b increase in q4 looks to be on the small side, especially given that the combination of falling US rates and the acceleration in RMB appreciation dramatically increased the incentive to hold RMB.

Hot money inflows - the gap between the sum of the trade surplus, the income surplus and FDI inflows and augmented reserve growth - do not seem to have picked up all that much recently, despite the faster pace of RMB appreciation. 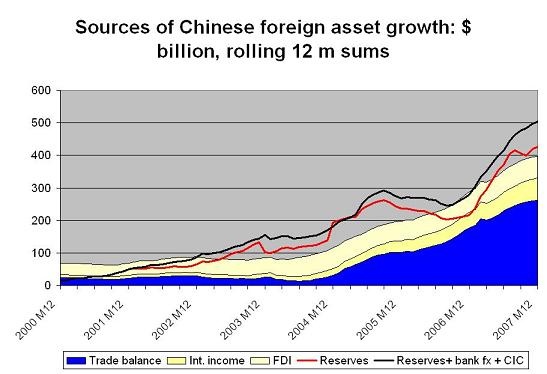 But is this picture capture all of the increase in the foreign assets of the government of China, or does it leave something out?

Logan Wright of Stone and McCarthy believes that the big state banks have been told to hold dollars to meet the last set of increases in their reserve requirements. If he is right, the big state banks would have needed to have set aside $108b to cover the 300bp increase in the reserve requirement since August (Wright estimates each 50 bp is worth $18b). $72b of that should have come by the end of November, with another $36b in December.

But there is no real sign in the PBoC’s banking data of an increase in the banks foreign assets of this scale. Presumably, the banks would have need to have sold RMB to buy dollars, so the increase would only show up on their asset side - as they would be taking on the currency mismatch that otherwise would be assumed by the central bank. The central bank has also squeezed the banks external borrowing, so some of the increase in dollar holdings could have in effect been used to reduce liabilities rather than build assets.

In some sense, though, the details don’t matter.

Suffice to say that I am not sure I have found all of the fx that China has squirreled away. They are more likely to be an underestimate than an overestimate.

Let’s suppose that my measure of reserve growth really hasn’t captured these funds. How would the picture change?

Well, total Chinese foreign asset in 2007 would be close to $600b. And an awful lot of that increase would be coming from "hot" money inflows. 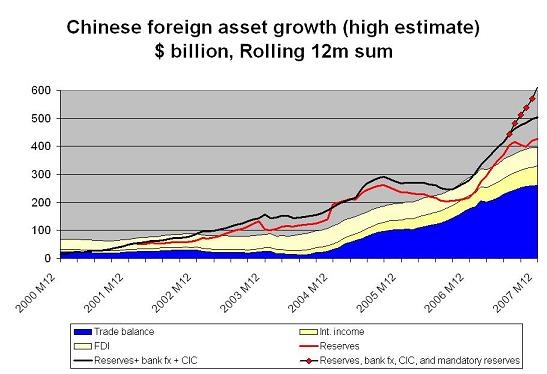 A rise in hot money flows would make some sense. With ten year Chinese treasury bonds yielding more than 10 year US treasury bonds and with growing expectations that the RMB will appreciate by at least another 7% this year, there is a pretty strong incentive to hold RMB rather than dollars. The impossible trinity and all.

And if had to bet, I would bet that the recent changes in the way China manages its foreign assets - the pressure on the banks to hold more fx, pressure on state firms to hold more fx and the formation of the CIC -- will make it progressively harder to track how rapidly its assets are growing.

$500b is roughly equal to combined increase in the foreign assets of the world’s big oil exporters over the course of 2007.

A $500b pace of growth implies that the increase in the dollar assets of China’s central bank, state banks and sovereign fund likely financed about ½ of the US current account deficit (to keep a constant 70% dollar share in its portfolio, given $500b in flows and various currency moves, China would need to have added about $375b to its dollar portfolio in 2007).

It is a big enough sum that its allocation has a major impact not just on the future returns on a decent chunk of China’s national savings, but on the flow of capital around the world. It has a big enough impact on other countries that I would hope that a responsible stake holder would feel some responsibility to provide the world with a transparent accounting of its asset growth.

James Fallows discusses some of the political issues the growth in China’s foreign assets raises in this month’s Atlantic. I want to come back to those issues later in the week. If China’s foreign asset growth stabilizes at $600b a year -- and if roughly 2/3s of those assets flow into dollars -- China’s government will be buying $400b of US assets a year for some time. That is huge.