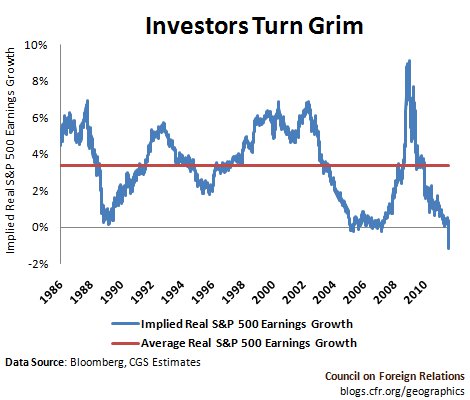 Weak economic data, a Washington debt standoff, a downgrade of U.S. federal debt, and rising European default fears helped send the S&P 500 stock index down 16% between July 22and August 6.  As the figure above shows, equity prices of late imply the worst earnings growth rate expectations in 25 years—such expectations even turned negative last week.  This dour outlook stems partly from renewed risk-aversion, which ironically redirected cash into downgraded U.S. debt, but it also reflects a sharp rise in concerns about where new profits will come from.  Operating margins and profits are near all-time highs, but revenues are still below their 2008 peak and real consumer spending has grown by only 2% over the past year.  Corporations currently have strong balance sheets and the lowest net debt-to-revenue ratio on record, but this is largely the result of cost-cutting which may have run its course.  In short, either stocks are very cheap or growth prospects very dim.