As part of a book I’m working on, I’ve spent some time wading through the econometric literature on speculation in commodity markets, oil in particular. This body of research tries to shed light on how the inflow of investor money into commodity derivatives over the last decade has affected these markets. I’m skeptical of a lot of what’s out there on this topic, though there is also some excellent work, too, like from Bassam Fattouh at the Oxford Institute for Energy Studies.

Unfortunately, much of the research on this topic doesn’t withstand close scrutiny. It’s not for a lack of smart people trying. I see it mainly as a data problem. The statistical methods used are often sophisticated, yes. But the publicly available data about global oil flows, including stockpiling, are far too limited, and not nearly internally consistent enough, to make it easy to form solid, actionable answers to many of the questions regulators have been trying to answer.

It’s true that some research suggests changes in certain aspects of market behavior as the profile of market participants has evolved. Here’s an example. Jim Hamilton and Cynthia Wu made a compelling case in a working paper last year that risk premia in crude oil futures prices have changed since 2005, which they ascribe mainly to the inflow of financial-sector capital (see the figure below). 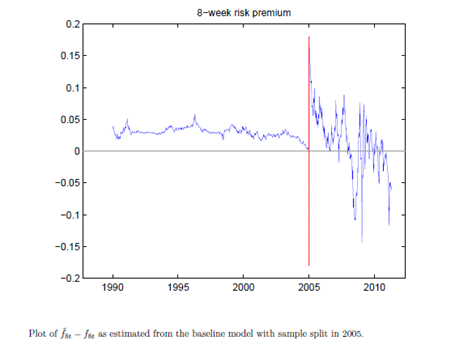 They may be right. But regulators should beware of drawing the wrong lessons from studies like this one. Fluctuations in risk premia are relevant to oil traders, but not necessarily relevant to normal people, whose focus is on how much they pay at the pump. A change in one aspect of the market (in this case, derivative risk premia) does not necessarily cause a problematic or unfair change in other aspects, like retail prices. Yes, the two can at times be linked, but not always. Sensible regulation in commodity markets doesn’t seek to impose stasis on what should be a dynamic, evolving market, but rather to respond to structural changes that undermine the utility of these markets, their function as a means of price discovery, and their role in the economy more broadly.

The Future of American Infrastructure