The proxies that provide the best estimates of China’s actual intervention in the foreign currency market in August are out, and they in no way hint at the stress that emerged in Hong Kong’s interbank market in September. 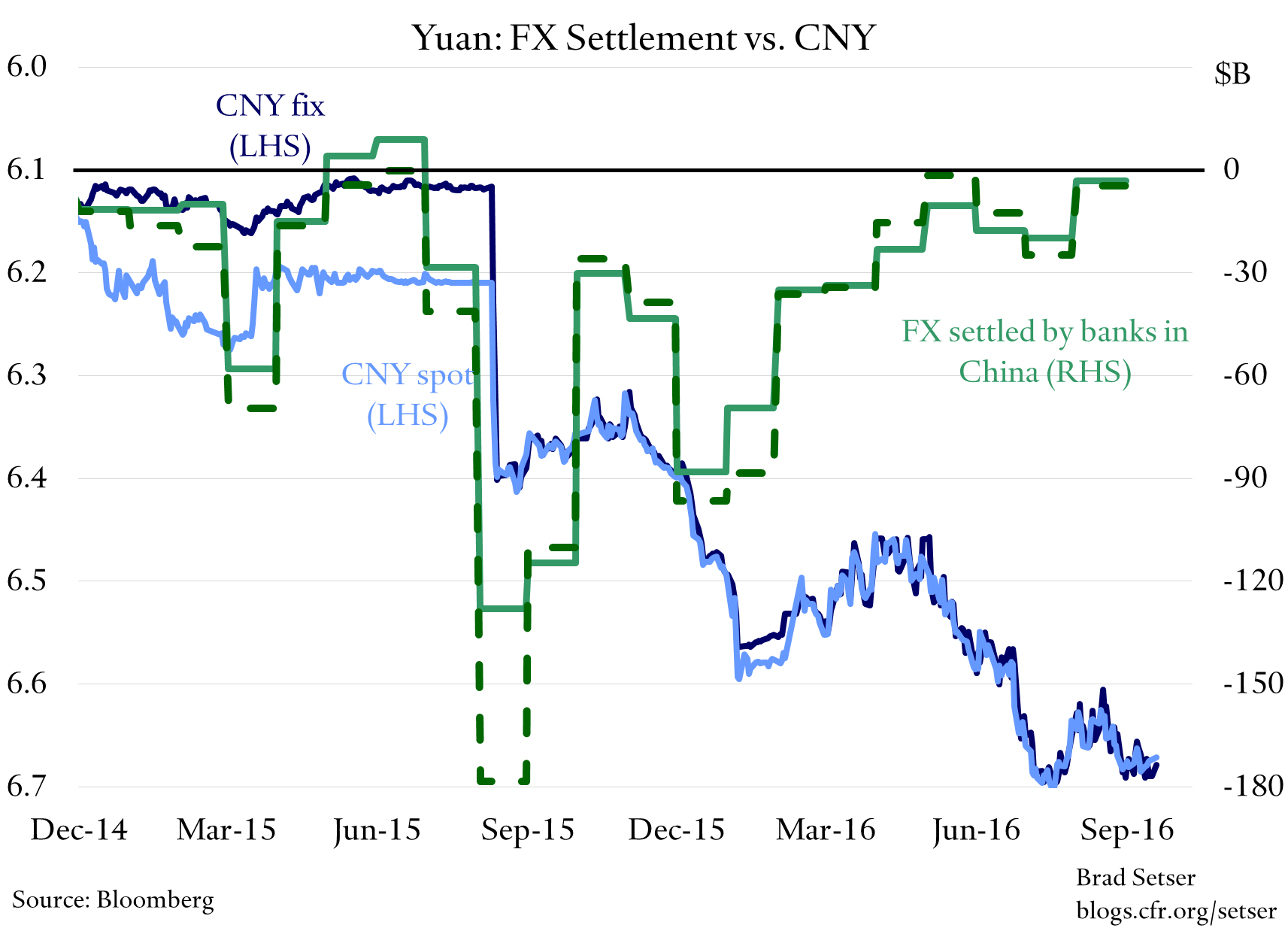 SAFE’s data on foreign exchange settlement, which in my view is the single best indicator of true intervention even though (or in part because) it aggregates the activities of the PBOC and the state banks, actually indicates a fall-off in pressure in August. The FX settlement suggests sales of around $5 billion in August. Even after adjusting for reported changes in forwards (the dashed line above). 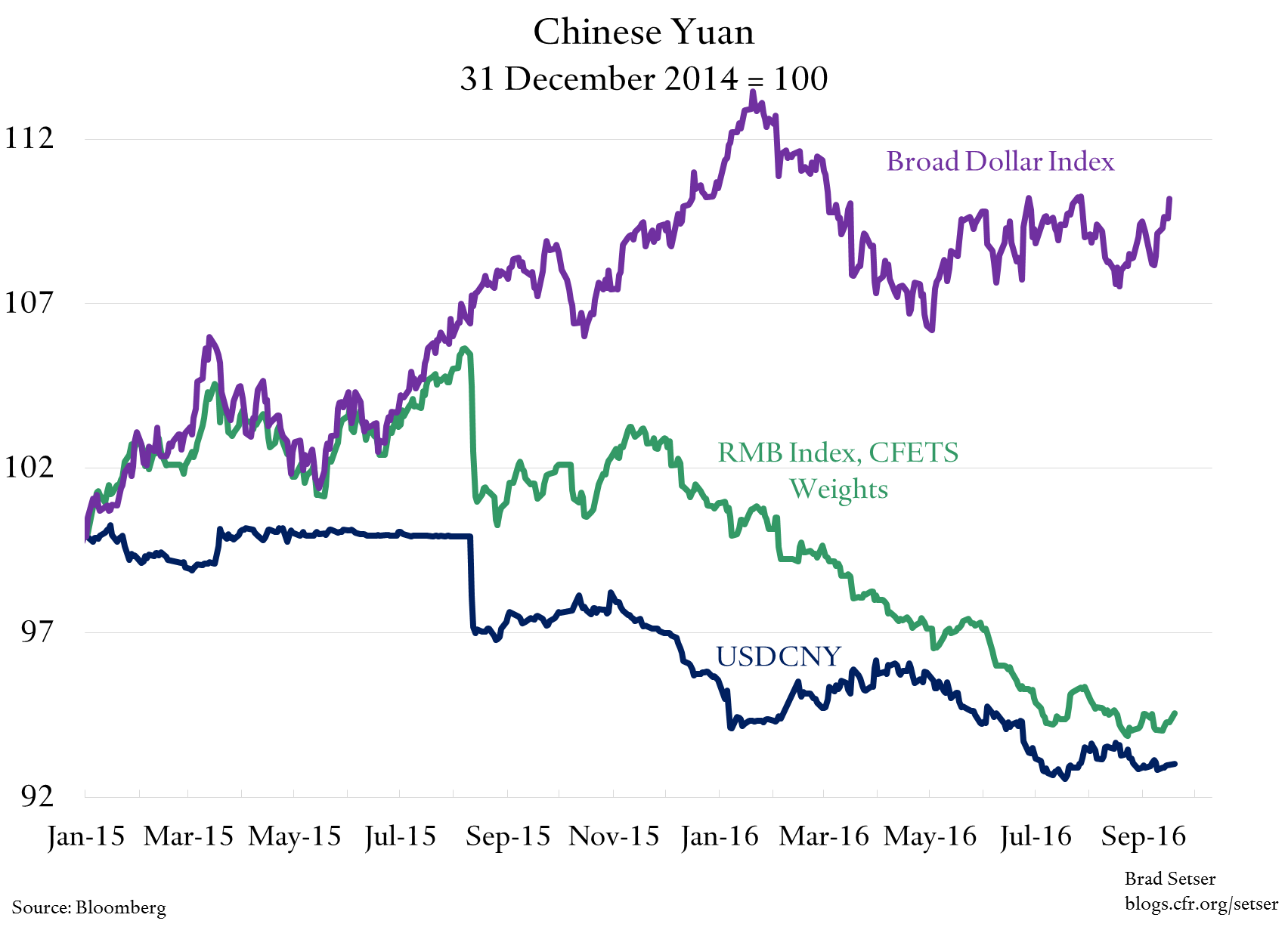 One is that China that the market thinks China will find a way to resume the yuan’s slow slide against a basket of currencies of its major trading partners after the G20 summit, even if that means additional weakness against the dollar. There was a widespread belief in the market—and among analysts who watch such things—that China would not allow a significant move in the market before the G20 summit. Now all bets are off, or will come off after the yuan is formally included in the SDR in early October.* The spike in offshore yuan interest rates thus reflects a true rise in speculative pressure against the yuan, one that the PBOC is resisting. Saumya Vaishampayan and Lingling Wei of the Wall Street Journal:

"Suspected intervention by Chinese banks in what’s known as Hong Kong’s “offshore” market has led to a surge in the cost for banks in the territory to borrow yuan from each other. Investors and analysts believe the intervention—which they say has likely come at the behest of China’s central bank—is aimed at thwarting bets against the Chinese currency, also known as the renminbi. The suspected heavy buying by Chinese banks has helped squeeze a market China had tried to foster just a few years ago as it looked to promote the yuan as a major international trading currency."

The other is that the PBOC has tightened offshore yuan liquidity for reasons of its own (not necessarily in response to a rise in speculative pressure), in part by putting pressure on the state banks not to roll over maturing forward contracts.*

Only the PBOC, and perhaps the the Bank of China, knows for sure.

I do though suspect that China is likely to have to show a bit more of its hand in the foreign currency market relatively soon.

Does China manage for stability against a basket, or manage for a depreciation against the basket? Has the CNY depreciated by enough, or do the Chinese authorities want a larger move? How much weight does it put on the dollar versus the basket when push comes to shove?

As many have noted, the broad effective value of China’s currency has slid pretty steadily this year—though there was a bit of a pause in August. Until recently, that slide was consistent with a yuan that was only a bit weaker against the dollar than in January (the move from 6.6 to 6.7 came in the face of the Brexit shock; it didn’t appear to be a unilateral Chinese move).

Call it the Chinese currency version of Goldilocks

The trade "fundamentals" to my mind do not provide a strong case for further weakness in the yuan against a basket of currencies. Even with weak Chinese exports to the United States, the Chinese data on export volumes shows modest year-over-year growth. August export volumes appear to be in line with recent trends; a reasonable estimate suggests Chinese exports continue to grow a bit faster than would be implied if China’s exports were growing with global trade.** I personally do not think China can expect to go back to the days when Chinese export growth significantly exceeded global trade growth (see Box 2 of this ECB paper).

Of course, the trade data also isn’t the only factor that drives currency markets.

* A small technical point. The Mexican peso plays a much bigger role in the U.S. dollar’s broad exchange rate than it plays in China’s basket. And the peso is weak right now. That is one reason why the CFETS index might diverge from the dollar index. The dollar/euro and dollar/yen rates have been relatively stable in September, though of course that could change.

** I am focusing on the data on volumes, not the nominal number. If export prices did not change in August, August export volumes increased year-over-year. The official Chinese data will be out in a few more days.

China Can Now Organize Its Own (Financial) Coalitions of the Willing