The odds that the US slipped into a recession around the turn of the year have increased. Nouriel Roubini is convinced. Jim Hamilton isn’t. The risk that US growth may slow later the in year are rising. So far, US export growth has remained robust – supporting growth. The pace of export growth hasn’t risen recently -- if has been strong for a long time -- so much as the pace of import growth has slowed: Imports have contributed positively to growth for the last three quarters, meaning real imports fell (see Dean Baker for more). But there is a growing risk that export growth will slow with a slowing global economy.

Signs of trouble are now visible in Europe. And not just in housing and finance-dependent economies like the UK – where consumer confidence has really plummeted. Anything that includes the phrase "worst since 1974" cannot be good. Europe, writ large (i.e. counting “new” Europe) has been a more important engine of global demand growth that the US since 2005, so a European slowdown matters for the world. Especially if Europe slows before the US resumes sustained growth.

Japan hasn’t had much momentum for a long-time. It isn’t likely to find new momentum now.

Of all the major economies – and with a $4 trillion GDP and $1.4-$1.5 trillion in goods exports this year, China is far too big to be considered anything other than a major economy – China has by far the strongest growth.

Its exports have held up quite well as the US – and Chinese exports to the US -- slowed. Thank Europe – and booming sales to India and a host of other emerging economies. Many emerging markets fear cutting tariffs on Chinese goods far more than cutting tariffs on US and European goods. But forward looking indicators* suggest a broader slowdown in exports. Chinese manufacturers and policy makers are worried.

And it increasingly seems like China took a policy decision to slow the RMB’s appreciation against the dollar (and thus to slow the RMB’s likely appreciation against all the other large oil-importing economies) in order to support China’s export sector. That decision came even though China has the strongest domestic economy and the largest current account surplus of all the large oil-importing economies.

China has a larger export sector -- and probably more value-added in its export sector, as China’s domestic value-added has increased sharply during China’s boom – than most other big economies. And it has relied more on exports to support its growth (exports contributed over 2% to China’s GDP growth in 2005, 2006 and 2007) than other big economies. So a slump in China’s exports will undoubtedly have an impact on China. And unlike in 2007 – when most emerging Asian economies appreciated by more than China – in 2008 China’s currency has appreciated not just v the dollar but against a host of smaller Asian economies.

A chart of the RMB v the dollar (since 2005) shows the various phases of China’s RMB policy. 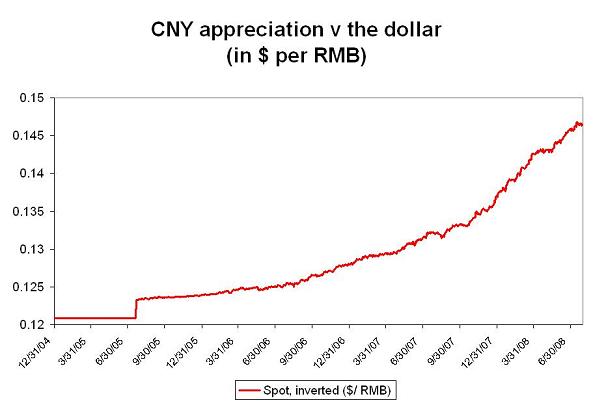 The initial revaluation was followed by a long period of almost no appreciation. China genuinely seems to have worried that even a small move would hurt its exporters (remember all the stories about their razo-thin margins). It took about two years for the RMB’s value to increase by a cent, from 12.5 cents to 13.5 cents.

As the US slowed, the dollar started to depreciate and inflation in China began to pick up, China started to allow the RMB to appreciate more. Last fall, it allowed a meaningful appreciation for the first time.

But that created problems of its own – not the least hot money inflows, as the RMB was appreciating and Chinese rates were above US rates.

And now China seems to have decided to pause the RMB’s appreciation, at least for a while. Export interests have reasserted control over policy. Special interests aren’t just a factor in trade policy – there are a host of industrial sectors in China that have been “protected’ by an undervalued exchange rate.

Slowing RMB appreciation – the non-deliverable forward suggests an appreciation over the next year of only a bit above 4%, a pace last seen in 2006 – might reduce hot money inflows. But if China really wants to make its monetary policy consistent with its exchange rate policy, it also needs to reduce domestic interest rates.

Ending appreciation, cutting rates and relaxing lending curbs would certainly support growth. It also would risk pushing Chinese inflation up to the levels seen in the Gulf.

While I would prefer that China allow its currency to appreciate (helping the global economy) and use domestic policies to support growth (also helping the global economy), if China is going to slow the pace of RMB appreciation, I certainly would hope that such a policy isn’t accompanied by policy steps to curb demand growth (like tight fiscal policy) in order to limit inflationary pressures. China tried that policy before, back in 2004. It led rather directly to China’s big current account surplus. The last thing a slowing global economy needs now is a Chinese policy that supports the export sector by limiting RMB appreciation while restraining domestic demand growth to limit inflation.

Lest we forget, the RMB has fallen by something like 30% against the leading currency of its most important trading partner since the turn of the century. 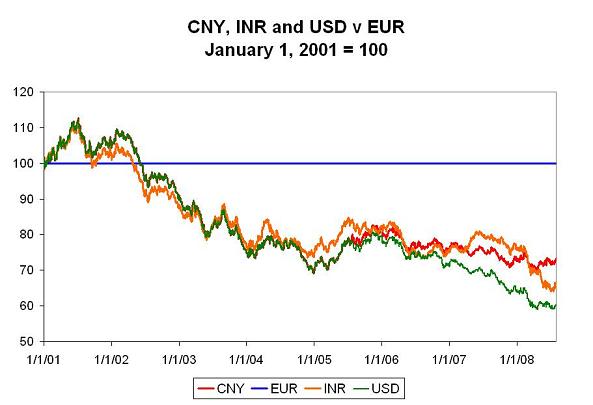 The recent appreciation that Chinese exporters have complained so vociferously about hasn’t even pushed the RMB much above its late 2004/ early 2005 lows against the euro. The RMB was down 30% v the euro (from late 2000) in early 2005. It is now only down 26-27% …

China has enjoyed one of the biggest export booms in modern history. Exports are on track to from around $250b in 2000 to $1.4-$1.5 trillion in 2008 now. China’s exporters don’t have much to complain about. In the 1990s, export booms were followed by periods when exports hardly grew at all. The trend wasn’t uniformly up. Realistically , China cannot expect to be able to continue to rely as heavily on exports for growth as it has. It has the policy tools available to do shift the basis of its growth. The political will to do so, though, seems lacking. At least for now.

* Stephen Green of Standard Chartered has a good research report on this.

The Coronavirus Outbreak Is the Shape of Things to Come