The new secular reality in the U.S. oil market—declining net imports, driven by increasing domestic production and lower demand—has been making headlines for some time now. But what does decreasing dependence on imported oil mean for U.S. foreign policy?

That’s the question that’s been on my mind as I’ve looked back at a 2006 CFR Task Force Report, The National Security Consequences of U.S. Oil Dependency. It’s a fantastic study and still well worth a close read, six years later.

In hindsight, one thing that’s fascinating about the study is its context: it was written around the time that U.S. crude oil net imports hit an all-time high (2005). Back then, the notion of a Western Hemisphere oil boom—and what it might mean for the United States (and even global) economy—had not yet become the talk of the energy community. Imports had been trending higher the last two decades. Few would have predicted the reversal that has taken place in U.S. oil imports, let alone its magnitude. 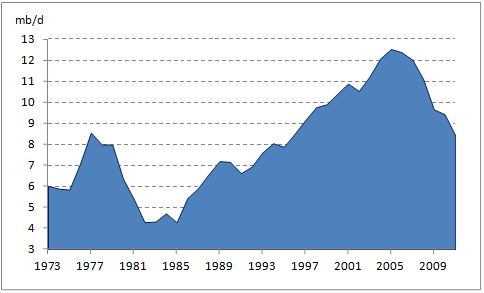 Since 2006, U.S. net oil imports have declined by more than thirty percent. A broad consensus of energy analysts expects the trend to continue, predicting game-changing implications for the United States and geopolitics more broadly.

So back to my opening question: To what extent is this decline in imported oil affecting U.S. foreign policy? How might a continuation of the trend affect policy in the future? One way to get at the question is to start by thinking about how you think U.S. dependence on imported oil affects U.S. foreign policy today, then imagining how a decrease in the level of dependence might alter your answers.

Here’s where the 2006 CFR Task Force Report is useful. Its authors identified five major reasons “why dependence on energy traded in world markets is a matter of concern for U.S. foreign policy.” They also examined a sixth, more tentative, reason.

I’ve listed a very abbreviated version of all six reasons below.

How much, if at all, do you think a continued reliance by the United States on oil imports would affect each of the reasons they put forward? Would it have no effect, eliminate the reason altogether, or just lessen its significance? They’re questions that Michael and I have been debating, which I now put to you.