The US January trade deficit fell to $36 billion. That is as low as it has been in a long time. The petroleum deficit (seasonally adjusted) fell to $14.7 billion -- $4 billion less than in December 2008 and $20 billion less than January 2008.

So where is the bad news?

1) The average price of imported oil in January was $39.81. Why is that bad news? Simple: Unless the price of oil tumbles, the monthly US petrol deficit isn’t going to fall further. From June to August the monthly petrol deficit was, on average, close to $39 billion. The fall in the price of oil since then consequently has brought the overall deficit down by close to $25 billion. That alone explains most of the improvement in the trade deficit.

The data on the United States ’real" trade balance consequently paints a far more discouraging picture. The real balance removes the impact of price changes from the data. The real non-petrol goods deficit was a bit wider in January than in December ($32.8b chain weighted dollars v $31.6b). The deceleration in real export growth has been quite sharp. Real exports were up 10% y/y as recently as July 2008. They were down 9.7% y/y in December 2008. And they were down 19.2% in January.

Real goods imports flat in June 2008 (and close to flat in July); they are now down over 17.6% y/y in real terms. Not only is the y/y fall in exports now larger than the year over year fall in imports, but the pace of deterioration in exports is now more rapid.* 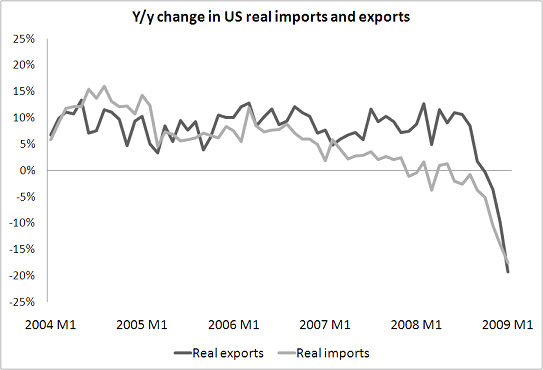 Net exports subtracted from US growth in q4 for the first time in a long time. That may well continue in q1.

The sharp fall in US exports -- and the end of the improvement in the US "real" trade balance -- adds urgency to the US call for a larger global stimulus. 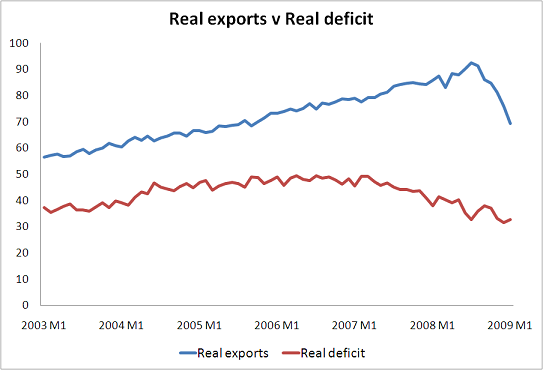 China’s Premier Wen has expressed concern - understandable ones, given China’s huge holdings -- about the safety of China’s investment in the US. I would note that buying more foreign goods (i.e. importing more) is an obvious alternative to buying more bonds. And right now the global economy -- and the US economy -- could use a bit more demand for goods.

Thanks to Arpana Pandey for help on the graphs. Calculated Risk has a set of useful graphs showing the evolution of the nominal trade balance as well.

UPDATE: US exports to China were down 28.6% y/y in January, while US imports from China were down "only" 5.4%. That meant the US deficit with China is actually a bit larger in January 2009 ($20.6b) than in January 2008 ($20.3b) even though the US is importing less from China. The timing of the Chinese new year no doubt pulled the export number down a bit (y/y Chinese imports were way down in January, but they bounced back a bit in February). But the trade data still suggests to me that there was a sharp slowdown in economic activity in China at the end of 2008 that pulled down China’s imports. The US exports some commodities to China -- as well as things like scrap iron. Falling commodity prices consequently would have an impact. Some US exports to China are also reexported to the world. But the US also exports capital goods to China, and well, the fall there would reflect a fall in Chinese investment demand. I don’t yet see the basis for arguing that Chinese domestic spending is going to pull the world out of the current slump. Not so long as the world’s exports to China are falling so sharply.

Tidbits from the Fed’s flow of funds