Skip to main content
Be careful &#8212; real export growth looks to have slowed

Unless your family is in the wheat or beans business (wheat and soybeans exports have more than doubled when q1 08 is compared to q1 07; total food and feed exports are up 50% y/y), there actually wasn’t a lot to like in this month’s trade release.

The real problem though was on the export side. Export growth looks to be slowing. The headline nominal growth numbers look good. Y/y non-petrol goods exports are up by a healthy 14.8% -- far more than the 3.3% growth in nominal non-petroleum imports. But if the rise in agricultural exports and exports of industrial supplies (petrol, chemicals, metals) is stripped out, export growth was only up 5.2% 8.8% in nominal terms (oops; my bad).

Slower growth among those exports whose price hasn’t obviously increased is a warning sign.

A plot of real goods exports and imports shows a small monthly fall in exports in March.* 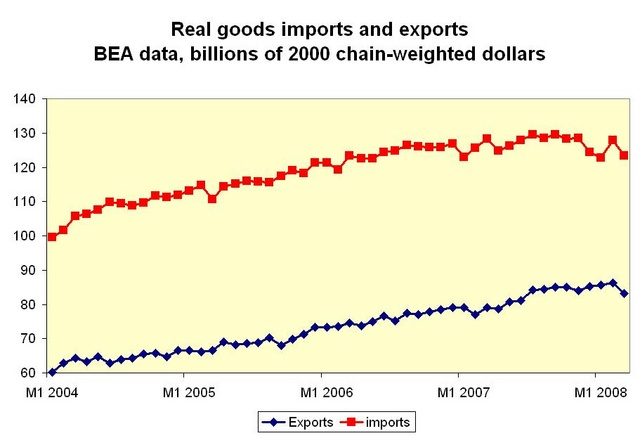 The data bounces around a lot, but it certainly seems that the pace of growth in real US goods exports is slowing. March real goods exports fell back below their level last June (see Exhibit 10). The usually reliable FT missed this part of the story, opting to highlight ongoing growth in nominal exports ("second-highest monthly" total in history despite the down tick from February) rather than the not-so-strong real growth.

Dollar depreciation helps, but a slowing world economy hurts. Countries that are spending more on oil may have a bit less to spend on other goods. Plus, in some sectors the US may be hitting capacity constraints. Boeing is a case in point: it needs to get its 787 assembly line sorted out …

The improvement in the nominal trade balance – plotted on a rolling 12m basis* – also has stalled. 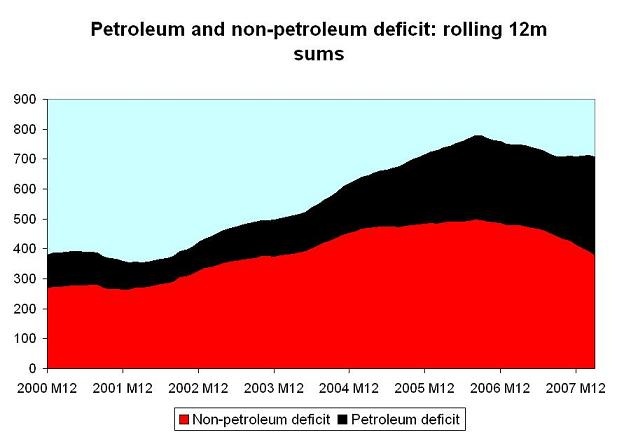 It isn’t hard to see why: oil

The improvement in the US trade balance with China (the deficit was $2.2 billion smaller in q1 2008 than in q1 2007) comes far more from the fact that US imports from China have essentially stopped growing (up $1.3b) than from a rise in exports (up $3.5b). Nominal imports from China in q1 were up only 1.8%; and nominal imports from Asia were up only 1.6%. Imports from Asia actually are growing at a slower nominal clip than imports from Canada or Europe. I am not sure if that reflects “J-curve effects” (flat volumes and rising prices lead to higher nominal imports are an exchange rate move) or petroleum and gas imports. The US obviously imports energy from Canada, and I think it also now imports some refined gasoline from Europe. Energy experts please correct me if I am wrong!

UPDATE: There is nothing like a bit of attention from the big blogs to inspire a bit of additional work. Y/y real goods exports are up 9.5% -- while y/y real goods imports (non-petrol) are down 0.8%. And the y/y growth in real goods exports is fairly broad-based. Ag export volumes are up 13.4% and real exports of industrial supplies are up 13.1%, but volumes for everything else are up 8.2% as well. The trouble is with the quarterly pattern of growth, which suggests some deceleration in export growth.

Finally, i should note that I initially miscalculated y/y nominal growth in non-ag, non-industrial supply exports. The right y/y growth rate is 8.8%, not 5.2%. My apologies.

The de facto nationalization of the global financial system