Capital flows through London are often taken as a proxy for petrodollars. Bloomberg’s Daniel Kruger, for example, argues that the buildup of Treasuries (and I would assume Agencies) in the UK reflects oil money.

The Organization of Petroleum Exporting Countries held $153.9 billion in Treasuries at the end of April, Russia had $60.2 billion and Norway owned $45.3 billion, according to the Treasury Department. Combined, that represents a 113 percent increase from 12 months earlier. Oil producers own a majority of the $251.4 billion in Treasuries held in the U.K., an 85 percent increase.

This isn’t unreasonable. London probably manages more petrodollars -- and more Gulf sovereign wealth fund money -- than any other financial center. And there is a reasonably close correlation between the UK’s purchases of Treasuries and the price of oil (or my estimate of oil foreign asset growth). 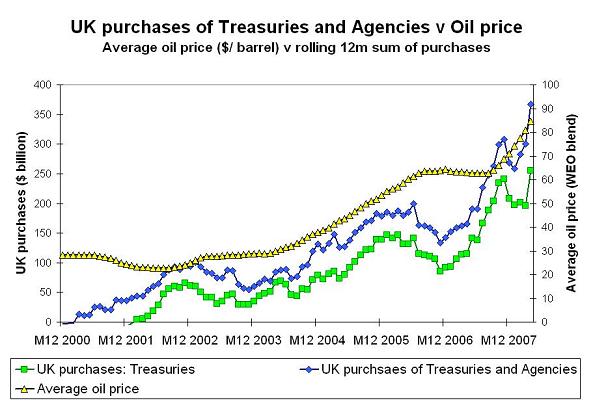 Correlation though, doesn’t imply causation. There is also a close correlation between purchases of Treasuries and Agencies through London and China’s reserve growth. 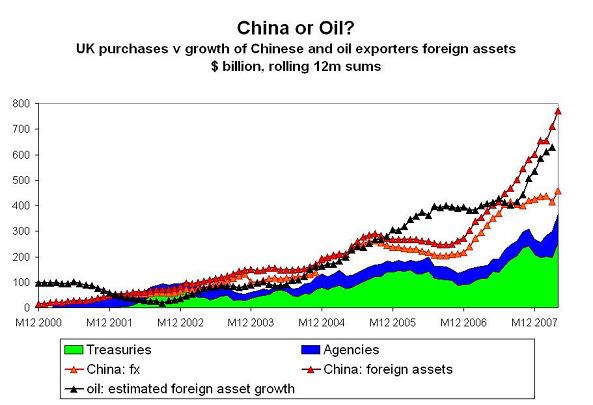 And yes, this graph implies that Chinese reserve growth has been quite correlated with the price of oil. That in some sense is the core source of the world’s imbalances: China is running a big surplus and building up its foreign assets at an extraordinarily rapid pace even as the oil exporters’ surplus soars.

I’ll provide one more example of a false correlation involving London -- one I know well because I was almost convinced that I had discovered something important a year ago, but fortunately didn’t publish it because I couldn’t quite make everything match up.

Up until the end of 2006, rising oil prices and UK purchases of US corporate debt (a category that includes all asset backed securities that lack an Agency guarantee) were highly correlated -- at least if you looked at the 12m sum of corporate bond purchases and the 12m average oil price. 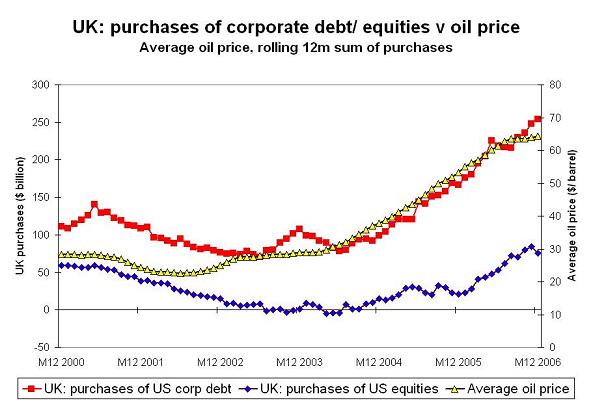 That correlation, though, completely broke down in late 2007. 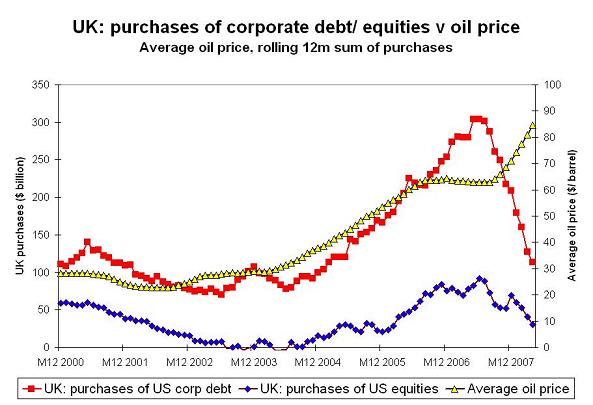 The rise in UK purchases of US corporate debt seems to have reflected the expansion of London-based SIVs and the "shadow" banking system far more than "petrodollars." These flows collapsed after August. Oil prices -- and one assumes, petrodollars, kept on rising.

It is also interesting to note that purchases of equities by UK investors -- a category that might be expected to pick up purchases of US equities by London-based fund managers playing with Gulf money -- hasn’t tracked the oil price all that closely recently. I suspect this is more evidence that a lot of Gulf money is on the sidelines than evidence that the Gulf isn’t the ultimate source of demand for a lot of the UK’s purchases of US equities. But I am just guessing.

London hosts so many different kinds of institutions that it is hard to know -- a priori -- precisely which set of investors is behind any given flow. We might have a better idea if the UK made an effort to produce decent capital flows data. But there isn’t much evidence that the British government is all that interested in understanding the origin of the money that passes through London. And as a result, we are all left making informed guesses.

Too big to fail? Or too large to save? Thinking about the US one year into the subprime crisis