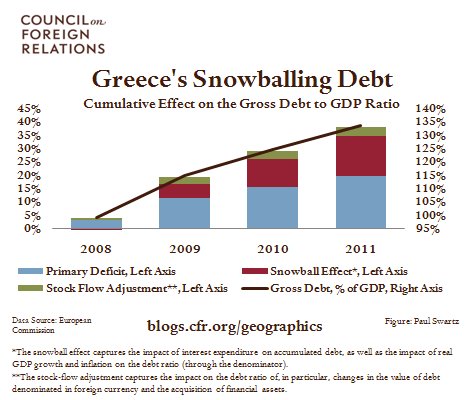 Greece’s 2009 budget deficit was 13.6% of GDP. The primary deficit – the balance before interest – was 8.5% of GDP. The main difference between the total deficit and the primary deficit is the ‘snowball effect,’ or the effect through time of low growth and high interest rates on the debt to GDP ratio. As shown in the figure above, the snowball effect replaces the primary deficit as the principal driver of Greece’s spiraling debt ratio in 2010 and 2011. New loans from the IMF and European Union may avert default in the short term, but do not change this debt dynamic. According to the European Commission, which optimistically assumes that Greece achieves 1.2% GDP growth and pays an average interest rate of 4.7% in 2011, Greece needs to achieve a primary surplus of nearly 5% of GDP in order to stop the upward march of indebtedness. This is a massive mountain for Greece to climb to avoid default. But consider also that once Greece achieves a primary surplus of any size it actually has an enormous incentive to default, as it can then wipe out huge amounts of accumulated debts without any longer needing the financial markets to fund current expenditures. In short, a Greek default is almost certainly a matter of ‘when’ rather than ‘if.’

Wolf: Governments Up the Stakes in Their Fight With Markets