The Wall Street Journal puts a more positive gloss on China’s March trade data than I would. To me the overarching story is simple: the data paint a story of deep distress in both the Chinese and global economy.

Imports though fell by more, in part because of the fall in oil prices. Imports fell close to 30% y/y in the first quarter. That isn’t just a function of falling commodity prices and fewer imported components either; US exports to China -- which presumably include a lot of capital goods -- are way down y/y.

As a result, China’s trade surplus was larger in the first quarter of 2009 than in the first quarter of 2008 ($62 billion v $41 billion). The global shock has gotten rid of many of the world’s macroeconomic imbalances. American households are saving more and importing less, so the US deficit is down. The oil exporters are no longer running a surplus. Even Japan’s surplus has come down, as demand for Japan’s exports has fallen more rapidly than Japan’s commodity import bill. China’s surplus though has continued to rise. 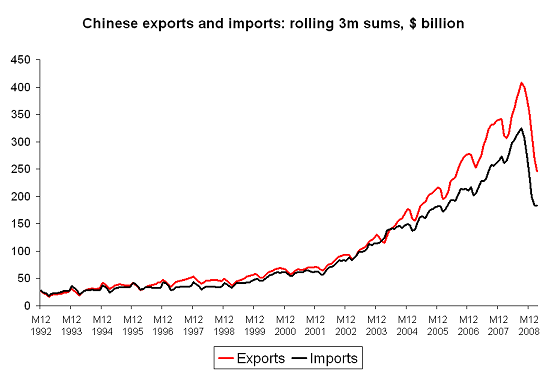 The nature of the change shows up cleanly in a chart showing the change in the rolling 3m sum of exports and imports. There is a bit of evidence that the pace of decline in imports has slowed. That certainly reflects the stabilization of commodity prices. It also reflects -- as the Journal reports -- a big increase in Chinese demand for metals like iron ore and copper, as firms -- and perhaps the government-- stocked up at low prices. 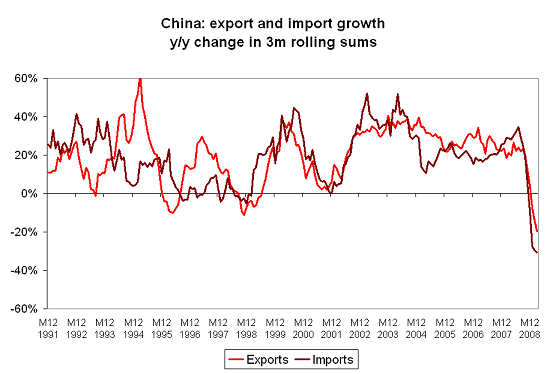 There isn’t though yet evidence of much of a stabilization in the fall in exports. At least not in the backward looking data. If nothing else that suggests that China’s trade surplus may not continue to rise, and could perhaps start to fall later in the year. The impact of the big fall in commodity prices on the data will wear off, and (hopefully) China’s domestic stimulus will kick in. 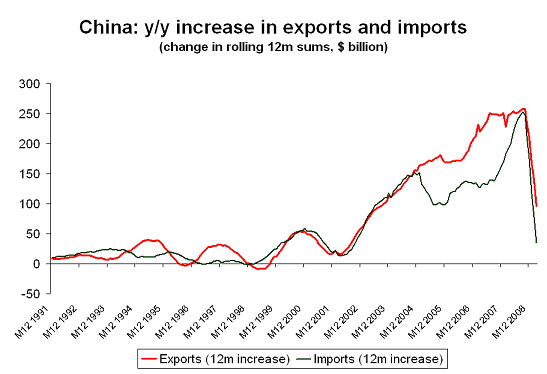 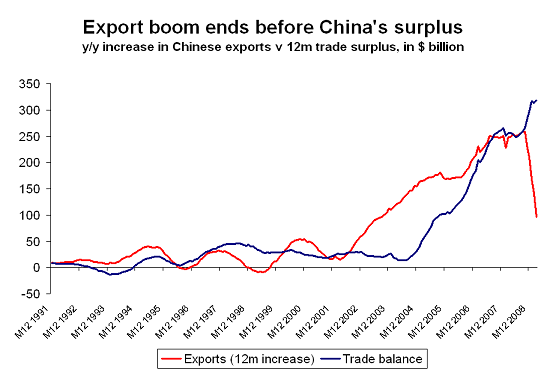 The latest PMI data suggests that China’s economy that the pace of contraction in China’s manufacturing economy has slowed, and perhaps may even be rebounding off a low base. But the trade at least suggests that China isn’t in rude health.

Here is one way of checking: compare the y/y rate of growth in US and Chinese imports. If China was doing better than the US, one would expect its imports to hold up better than US imports, setting aside differences in the composition of the two countries imports.* 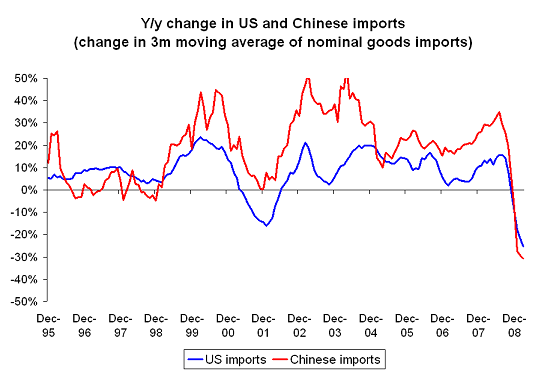 Call me crazy, but judging from the trade data alone, I would say China experienced a recession in q4 2008 and q1 2009.

* There are three reasons why Chinese and US exports could be correlated:

-- some Chinese imports are an echo of US demand, as China imports components for reexport to the US. This though was more important in 2000 than it is now, as the share of China’s exports going to the US has fallen.

-- The US and China both import commodities like oil, and thus both show the effect of changes in the price of oil. This is becoming more important over time, as China’s oil imports are growing.

-- The US and Chinese economic cycle is correlated.

It wasn’t an accident for example that Chinese imports grew faster than US imports in 2002 and 2003. China recovered much more strongly from the 2001 downturn than the US. Indeed, China’s policy makers slammed on the brakes in 2004 (leading import growth to slow) because of concerns that the economy was overheating. That was when China first started to show a large trade surplus.

The US is exporting its recession (by not importing)