The US goods trade deficit with China -- on a rolling four quarter basis -- is now stable. 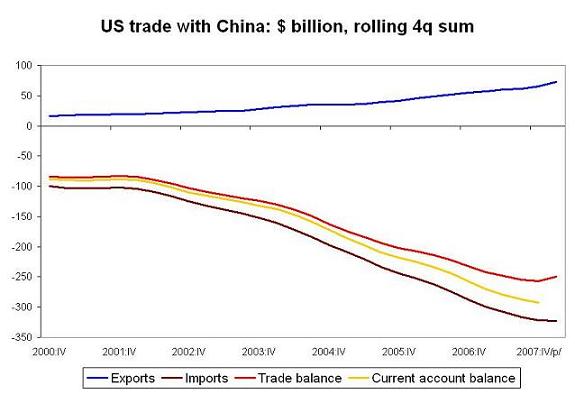 The slowdown in US imports from China over the past year is over-determined. The RMB started to appreciate in real terms against the dollar and the US economy slowed. I’ll leave it to the econometricians to sort out the relative impact of a stronger RMB and the US slowdown.

Interestingly, the current account deficit is still trending up (or down -- the deficit is getting bigger). The US is paying more interest on all the debt that China has bought.

One: China’s overall trade surplus remains stable at a high level. So far the rapid increase in China’s total exports has offset China’s rising oil import bill. The slowdown in Chinese exports to the US has been offset by strong growth in Chinese exports to Europe (the exchange rate ... the RMB is way down v the euro) and to other emerging economies. The RMB has appreciated far more in real terms against the dollar than against most other currencies.

Two: Chinese financing to the US likely has increased even as Chinese exports to the US have slowed and the US trade deficit with China has stabilized. China’s reserve growth has picked up and all those reserves have to be invested somewhere.

Trends in US goods trade with Europe are also worth examining. There are rather clearly two periods when US exports to Europe don’t grow -- the early 1980s, and the period from say 1998 to 2003. It isn’t an accident that both were periods when the dollar was quite strong. 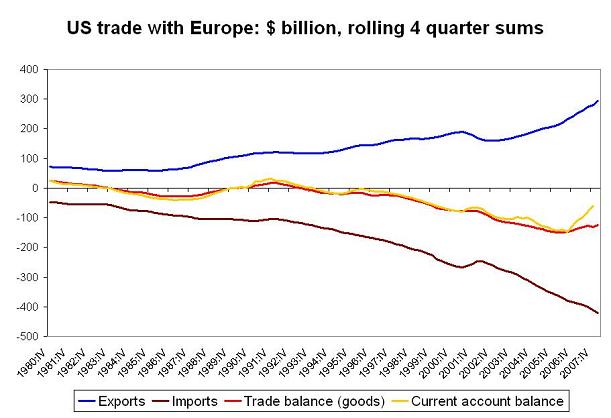 A few years back it was fashionable to argue that exchange rates have no impact on trade. The dollar’s 2003 fall didn’t produce an immediate improvement in the US trade balance. In part that reflects the rise in the price of oil. That is unquestionably a problem, particularly as the same forces that have helped push the dollar down also have helped push oil up. But the absence of immediately improvement also likely reflects the lags in the adjustment process.

US: China shouldn’t peg to the dollar but the Gulf should ...