Coal has been the world’s fastest growing energy source for a decade. That’s largely been driven by China. Increasingly, though, it’s about India too, which has important climate implications.

The chart below shows annual changes in global oil, gas, and coal consumption. (The figure for a given year is the change from the previous year; all numbers in this post are based on the BP Statistical Review of World Energy 2014.) Between 1988 and 2002 coal led the pack only once. But between 2003 and 2013, coal led in every year but 2008. 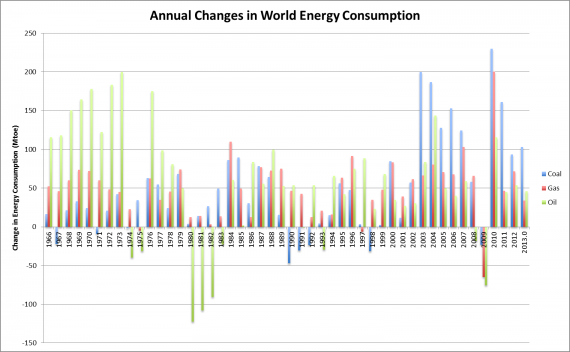 This was mostly a China story. The chart below shows annual changes in global oil, gas, and coal consumption but now excludes China. For 2003 through 2012, once you remove China, coal is no longer the world’s strongest growing fuel. (Natural gas largely dominates instead.) But look at 2013: coal is once again the world’s fastest growing source of energy even excluding China. 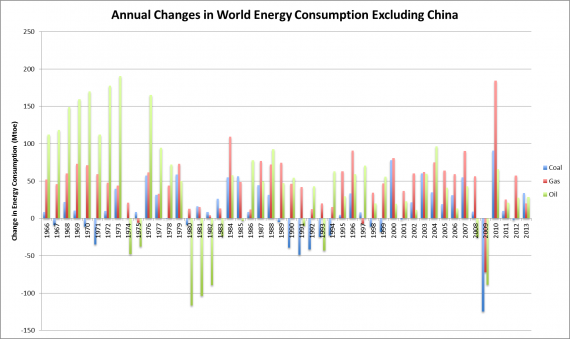 To really explain what’s happening you need to bring in India. The chart below shows annual changes in global oil, gas, and coal consumption beginning in 2003 but now excludes both China and India. Presto: coal is no longer the fastest growing energy source around. Indeed it’s not even the second fastest. 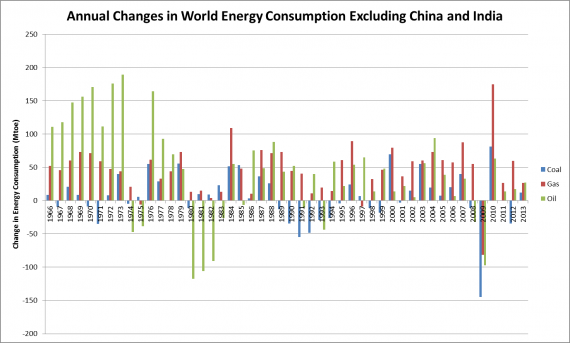 Why does this matter? One way of simplifying the climate problem has long been climate = coal = China. These were all gross exaggerations, of course, but they contained a useful kernel of truth. The corollary for policy making – and particularly for foreign policy – was that focusing narrowly on China made sense. 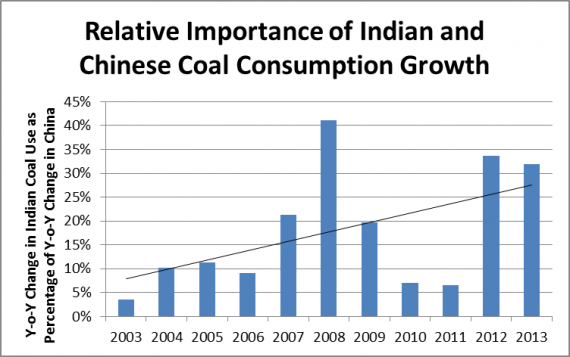 The implication is straightforward: Focusing on China is increasingly insufficient when it comes to climate-related foreign policy. India, long easy to neglect, is becoming more important every year.

The Total Cost of Climate Policy Isn’t What Matters Most