As Felix notes, I am reserve-obsessed.   For good reason, I would argue.  Right now, central bank reserve accumulation is driving the global flow of capital.  Private markets have been out-gunned.

We don't yet know how many reserves the BRICs added in the first half of the year because we don't yet know how much China added to its already very large stock of reserves.    We do know it added $135b in q1 -- and reportedly another $45b in April, but that hasn't been confirmed.    Jon Anderson of UBS thinks Chinese reserves growth slowed in May and June, but, well, it is hard to know for sure.

And if reserve growth slowed, that raises as many questions as it answers -- we now know that China's June trade surplus was close to $27b -- very large indeed.

Some of the June surplus may be borrowed from July, as certain exporters wanted to get their last tax rebates -- but I wouldn't bet too strongly on that.  Chinese export growth was been running at 25-30% y/y since late last year.   The June pace of export growth (27% y/y) isn't totally out of line.  As Macro-man (great post!) notes, the real reason for the surge in China's surplus was a fall in the pace of import growth.  Do look at his graphs showing the decomposition of China's trade.

Combine a $27b trade surplus, $5b or so in FDI inflows and $5b a month in interest on China's existing reserves and it is hard to see why China didn't add at least $37b a month to its reserves -- that is, unless the PBoC resumed farming some of its reserves out to the state banks through various swap contracts.

Combine $45b in reserves growth in April with the May and June trade data  and I am pretty confident saying that China added at least $200b to its reserves in the first half of the year.  That puts total BRIC reserve growth for the first half of 2007 at $400b.

$400b would have been a good annual sum for these countries not so long ago.  It is a huge number.   For the sake of comparison, the IMF's lending capacity is about $200b.

And there are a host of other emerging economies that are also adding to their reserves rapidly.    Argentina and Colombia and Peru in Latin America.   Malaysia, Thailand, Singapore and Korea in Asia.  Even Turkey -- which is attracting more capital inflows that it needs to cover its large current account deficit.   And with the rise in oil prices in the second quarter, one would assume a lot of the oil exporters as well.

Making this kind of forecast requires filling in a few gaps.  Not all the countries that Christian Menegatti and I track report their reserve data all that quickly.  China and the oil exporters are the main laggards.  And my tracking number no longer quite matches the IMF data, for reasons I still don't fully understand.

But the following graph, which compares the change in the Fed's custodial holdings with the increase in the reserves of the set of countries we track, is still of interest.  I annualized the rolling three month change -- and to bring the reserves data up to date, I assumed $35b in Chinese reserve growth in May and June, and modest ongoing reserve growth in a lot of oil exporters.    The basic picture is pretty clear -- both the FRBNY data and the country data indicates a very strong acceleration in reserve growth over the past few quarters. 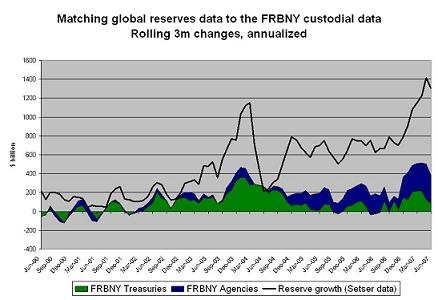 This kind of flow -- at least in my view -- has an impact on the global markets.  It is simply too big not to matter. With annualized reserve growth coming in above $1.2 trillion and the US external deficit a mere $800b, it is reasonably to think emerging economies dollar reserve growth came very close to financing the entire US deficit.

Let's assume that the BRICs end up adding $800b to their reserves this year.  And let's further assume that the BRICs are on average 25% undervalued against a basket of reserve currencies.    That is just a guess -- Dani Rodrik thinks China may be undervalued by more like 50%.   Conversely, countries with smaller current account surpluses -- say Brazil -- or even deficits -- India -- may not be undervalued by that much.    But 25% is a nice round number.   It implies that the taxpayers of the BRICs economies should expect to loose about $200b on their 2007 reserve growth.

That may be too low, or too high.   But it gives some indication of scale.

If 65% of the BRICs combined $800b reserve growth is flowing into dollars and the BRIC currencies are on average undervalued by 25% against the dollar, the BRIC taxpayers are subsidizing the US to the tune of roughly $130b  a year.  That is roughly 1% of US GDP.

Some of that subsidy is shared broadly, by all the Americans buying BRIC goods and services at a lower price than otherwise would be the case.   But some of that subsidy goes to a much smaller subset of the population.  After all, it is a subsidy that takes the form of overpaying for certain kinds of debt.

A lot of folks are sitting on capital gains that stem in no small part from low interest rates -- low rates that stem at least in part from this huge flow. A lot of people in New York make their money selling debt -- usually packaged in complicated ways -- to folks who sold their Treasuries or Agencies to the PBoC.   Private equity firms might not be the kings of Wall Street in the absence of the huge surge in central bank demand for debt, and the resulting easy availability of liquidity.

Rather than being amazed by how low US interest rates are, given how little the US saves, we would now be shocked if interest rates returned to more normal levels.

It sometimes used to be said that American farmers were far better at farming Washington than at farming.  That comment stung because it had a grain of truth.   The scale of US agricultural subsidies is now dwarfed by the subsidies that Beijing, Moscow, Brasilia,  New Dehli and others offer to parts of the US financial sector ...