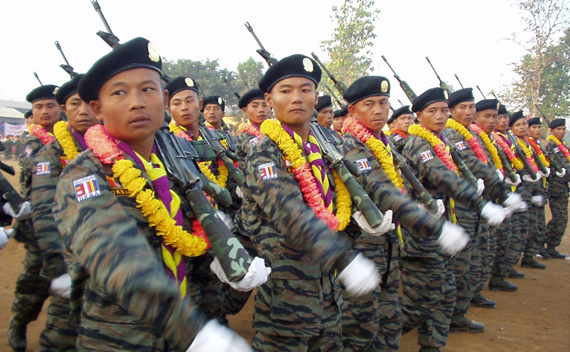 This past week, the Burmese generals captured global media attention by apparently stepping down from their posts in anticipation of the upcoming national elections, the country’s first in two decades. Of course, the stepping down, which includes around fifteen top army men, is something of a fiction; the military is controlling most aspects of the election, and certainly the military’s favored party is going to win the poll, but even a relatively cosmetic change in unchanging Burma makes news.

The generals’ decision shouldn’t be ignored – even a small window of political opening might set the stage for some independent-minded politicians to join the new parliament. However, the stepping down has overshadowed a potentially much more serious – and dangerous – decision by the regime. According to reports in Burma publications like the Irrawaddy, the regime recently warned the many ethnic insurgent armies operating on Burma’s frontiers, some of which have as many as 20,000 men under arms, that the junta will attack them next month if they don’t essentially disarm and join a junta-controlled border guard force. The militias, most of whom have had a shaky cease-fire with the junta for over a decade, thus far have refused.

In fact, the largest of the ethnic minority militias are reportedly  gearing up for battle, importing new weapons and buying weapons transporters, and joining forces in tentative alliances to battle the Burmese military. The most powerful of the groups, the United Wa State Army, also considered one of the largest narcotrafficking organizations in the world, has the potential to give the Burmese military a serious fight, one that could trigger widespread and prolonged instability in northeastern Burma, destabilizing areas of China as well, and triggering massive refugee outflows into China, the likes of which Beijing has little interest in handling.

Despite this potential disaster, there has been little focus on the ethnic areas in the run-up to Burma’s coming election. The ethnic minority armies, for their part, are mostly keeping mum. “We don’t know what they will do next,” one UWSA official told the Irrawaddy. “Our reaction will depend on their [the junta’s] next move.” And quite possibly, that move will be a disaster.