And, thanks to a wise decision by the U.S. Treasury to release the disaggregated data, it will soon be only of historic interest. The Treasury didn’t just release the current Treasury security holdings (or to be more precise, their holdings of Treasury securities in U.S. custodial accounts) for individual Gulf and Caribbean countries, it also released the historical time series. That is the way to immediately establish the credibility of a data series (Take note, for example, of the difficulty in interpreting China’s Special Data Dissemination Standard [SDDS] release, including the lines on China’s forward book, without back data).

So, shock of all shocks, we now know Iran doesn’t own any Treasuries. At least not any in U.S. custodial accounts.

The real story in the data, though, is the lack of any real story. The Gulf countries do not keep that many Treasuries in U.S. custodial accounts, so there wasn’t much for the disaggregated data to reveal.

That has long been apparent from the aggregated data. The $250 billion or so of Treasuries held by “Asian oil exporters” was small relative to combined reserves of these countries (excluding Iran, for obvious reasons) of around $1 trillion. And after say 2010, the changes in the Gulf’s combined Treasury holdings haven’t even really moved with their reported reserves. 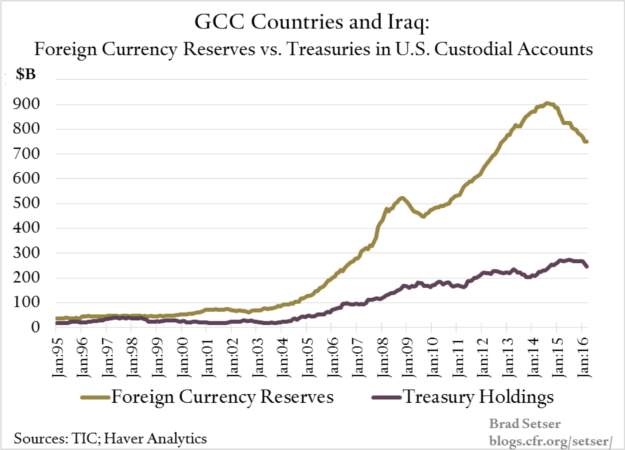 This in some ways is quite surprising: most of the Gulf counties peg to the dollar and thus need a buffer of dollar liquidity, and reasonably would be expected to have a relatively large U.S. dollar portfolio. It thus has long seemed likely that the Gulf countries in aggregate either make extensive use of outside fund managers or make use of non-U.S. custodians (to state the obvious: Belgium, Luxembourg, and a few others hold way more U.S. assets than can be explained by high–saving Belgian dentists; for a discussion of custodial bias see page 9 of this Fed paper).

There though is still a bit of information to tease out of the historical data dump. Saudi Arabia holds a small share of its reserves in U.S. custodial accounts (at least for Treasuries). Treasuries seem to account for only around 20% of its reserves. And Saudi Arabia, unlike the smaller Gulf states, doesn’t have a large sovereign wealth fund that invest large sums abroad. Most of Saudi “official” assets are managed by the Saudi Arabian Monetary Agency (SAMA). Which is a fancy way of saying that if Saudi reserves are invested like reserves rather than like a sovereign wealth fund, they should hold more Treasuries—or similar safe assets—than appear in the TIC data. 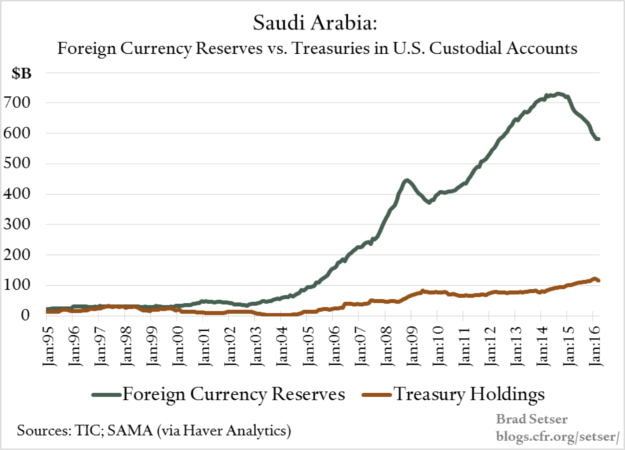 Indeed, it seems like Saudi Treasury holdings (at least those in U.S. custodial accounts) barely correlate at all with Saudi reserves. If anything, Saudi Treasury holdings have gone up in times of stress in global financial markets and stress in global oil markets (stress from the Saudi point of view that is), and thus seem negatively correlated with Saudi reserves. Saudi holdings of Treasuries rose in late 2008, likely as SAMA moved funds out of riskier banks into safer U.S. custodial Treasuries, and perhaps hoarded safe assets in preparation for an extended period of low oil prices—and again in 2015. 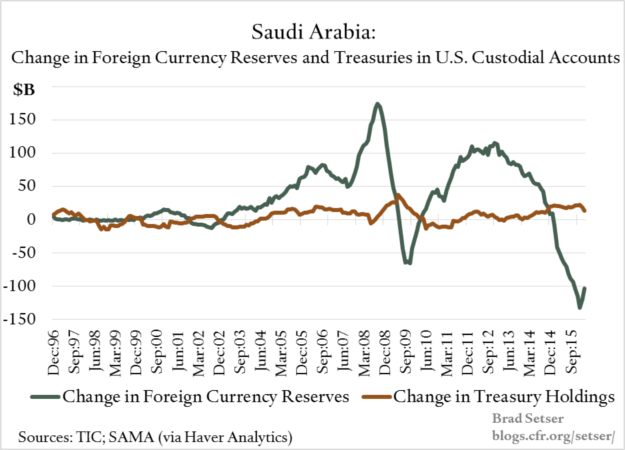 Conversely, the smaller Gulf countries’ Treasury holdings seem reasonably correlated with their reserves. Of course, these countries have huge sovereign wealth funds whose total assets far exceed their comparatively modest central bank reserves. That explains why Treasury holdings of the smaller Gulf countries at times exceed their reserves.* And why reserves haven’t changed that much even as oil prices have come down. 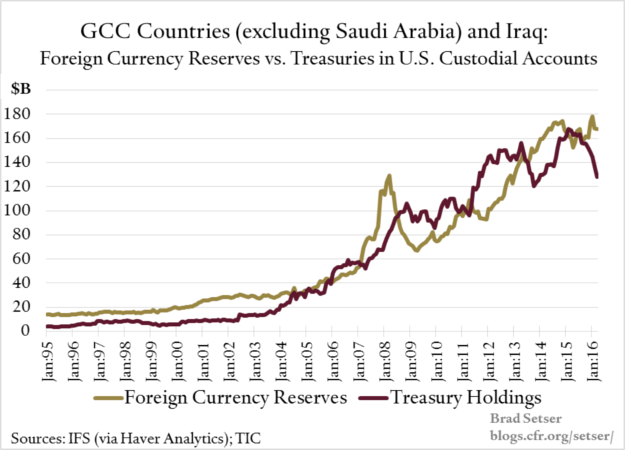 The bigger point though is the more important one. The real news in the “new” U.S. data is that the Gulf countries—who, even with the fall in oil prices have enormous reserves and wealth funds (Saudi Arabia’s reserves are larger than the reserves of all but two countries, and Kuwait and the United Arab Emirates have giant sovereign wealth funds)—simply do not currently make heavy use of U.S.-based custodians, and thus the U.S. custodial data doesn’t tell us all that much.

Too bad. As those who remember my old blog know, I am a huge fan of trying to tease information out of the TIC data and would much rather have had an interesting story to tell. We still do not really know, for example, just how many Treasuries the Saudis could sell, if they really wanted too.

* The TIC data for a given country covers both official and private holdings. In practice though, for many countries—not just the Gulf countries—there is often a close correlation between a countries total reserves and their total holdings of U.S. assets. Privately managed funds tend to disappear in the data—or rather to appear in places like the Caribbean or one of the various European custodial centers.

It Has Been a Long Time