South Carolina looks to be living up to its reputation as a rough-and-tumble place for politics. The GOP candidates have been going after each other with a vengeance in the hopes of gaining an advantage in advance of Saturday’s primary vote. Amidst all the sniping, they have been touting their defense and foreign policy credentials. The overarching theme has been “toughness.” The candidates are no doubt hoping to sway South Carolina’s many active-duty and retired military personnel to their side.

Ted Cruz gave a speech aboard the USS Yorktown, which is now a museum after sterling service in World War II and the Korean and Vietnam wars. In his speech, he pledged to “invest in our military with a simple goal: more tooth, less tail.” Cruz simultaneously released a plan outlining how he would rebuild America’s military. It can be summarized in five words: spend more, a lot more.

Marco Rubio and Donald Trump both said they would keep the prison at Guantanamo open, with Rubio telling “the Cuban government and anyone who’s listening: We’re keeping Guantanamo—forever." Meanwhile, Jeb Bush used his blog to defend his foreign policy credentials, arguing that “no other candidate has outlined a more comprehensive and detailed strategy to rebuild our military, destroy ISIS and protect our veterans.” Ben Carson released a statement on China’s deployment of air defense missiles, arguing “the Obama administration has stood by as China has undertaken large-scale construction and purposeful militarization of hotly disputed maritime territory throughout the South China Sea.” Carson also used a campaign stop in Gaffney, South Carolina to talk ISIS, Iran, and refugees.

We’ll know sometime Saturday night how much these appeals resonated with voters.

The Wall Street Journal reported that Trump favors the broader use of torture and that Bush isn’t impressed by Rubio’s foreign policy credentials. The latter story came a week after Rubio lodged a similar complaint against Bush. The New York Times reported on the audio feed from 2002 in which Trump said he favored the invasion of Iraq. RealClearPolitics’s Carl Cannon characterized Trump as an “Iraq Demagogue.” Daniel Drezner contended that “almost everything the Trump campaign proposes about foreign policy is false.” Stephen Kinszer argued that we might be witnessing “the great dumbing-down of U.S. foreign policy.” Foreignpolicy.com explained what Michael Bloomberg’s foreign policy might look like, even though the former New York mayor has yet say he will run for the White House. The New Yorker’s James Surowiecki discussed the economic populism that drives both Sanders and Trump.

South Carolina Republicans head to the polls tomorrow for their primary. Fifty delegates are at stake. Nevada Democrats are also busy tomorrow as they hold their caucus. Forty-three Democratic delegates are up for grabs. The two parties then switch states. The Republicans hold their Nevada caucuses on Tuesday, February 23, and the Democrats hold their primary in South Carolina on Saturday, February 27. Then comes Super Tuesday on March 1, when a dozen states hold nominating events; 25 percent of of Republican delegates, and 21 percent of Democratic delegates will be decided.

The Republicans hold their next debate on Thursday, February 25. The time has yet to be announced. CNN, Telemundo, and the Salem Media Group are cosponsoring the event, which will be broadcast live in both English and Spanish from the University of Houston. Wolf Blitzer will moderate; he will be joined by Maria Celeste Arraras, Hugh Hewitt, and Dana Bash. Hillary Clinton and Bernie Sanders next debate on Sunday, March 6, in Flint, Michigan. The debate’s details are still pending.

The Republican National Convention opens in another 150 days at the Quicken Loans Arena in Cleveland on July 18. The Democratic National Convention starts seven days later at the Wells Fargo Center in Philadelphia on July 25. Here are where things stand with the delegate count: 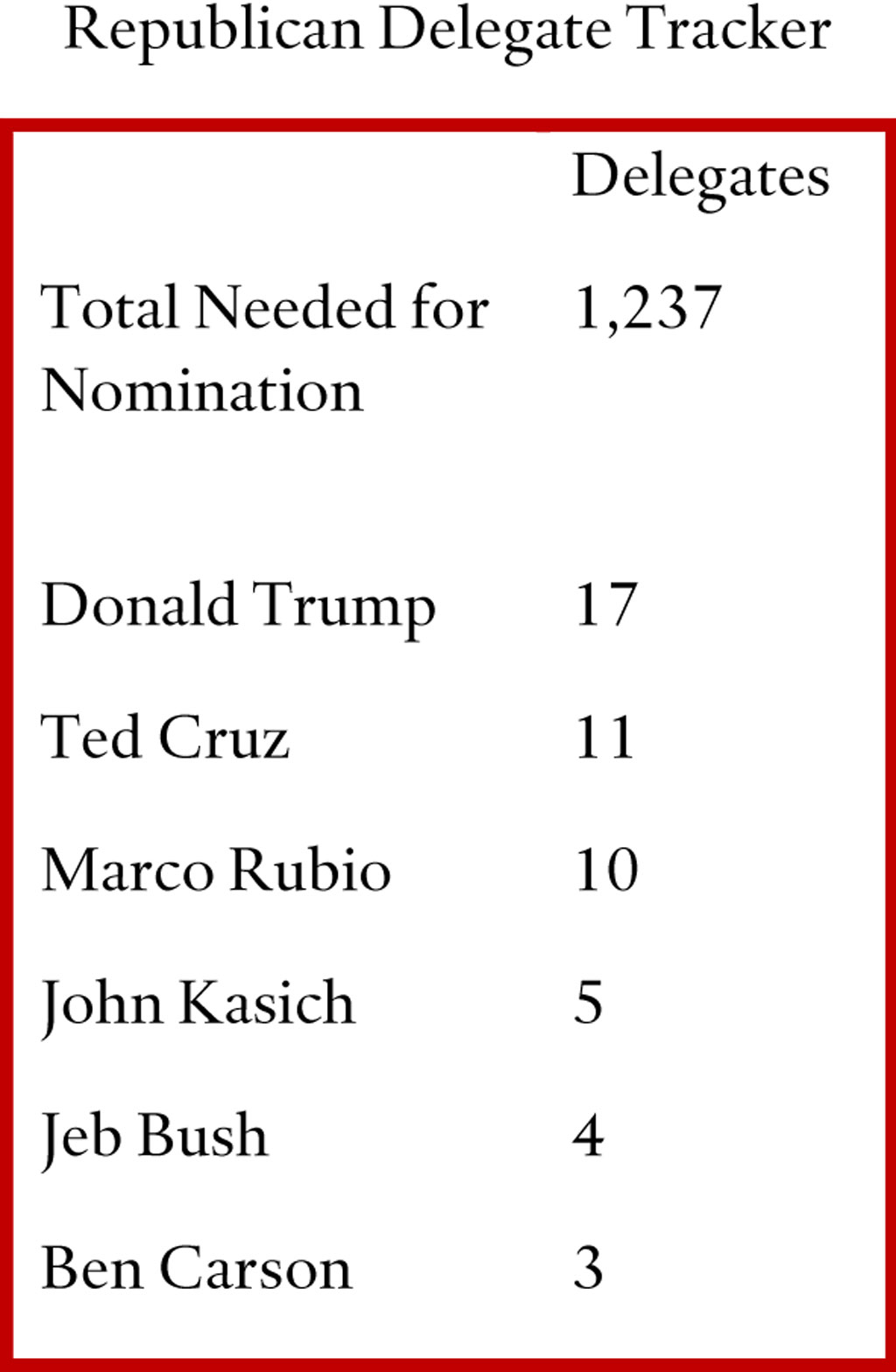 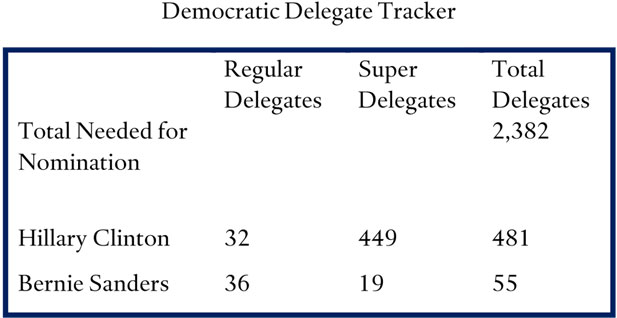 Election Day is 263 days away.