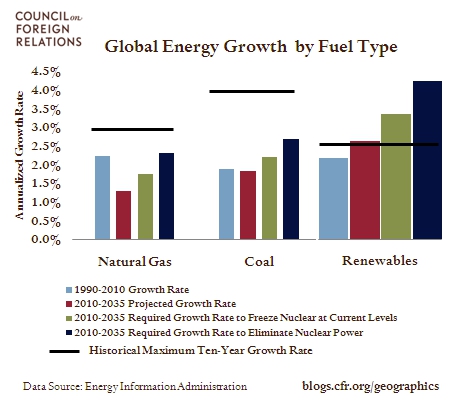 Japan’s nuclear industry is in full-blown crisis, raising global concern as to the safety and viability of nuclear energy. In response, China has frozen its nuclear reactor development program, while Germany has shut down seven reactors and initiated a three-month moratorium on a policy program meant to extend the lifespan of existing facilities. Chancellor Merkel said the policy shift was needed to allow the country “to reach the age of renewable energy as quickly as possible.” But the Chairman of the House Energy and Commerce Committee Fred Upton appeared to pour cold water on such a vision: “Wishful thinking about magic-bullet alternatives is not going to heat and cool our homes, get us where we need to go, and power the businesses that provide jobs.’’ Upton is almost certainly right. If the world were to freeze nuclear energy use at current levels, renewable energy output would have to double by 2035 to fill the energy-requirement gap on its own. If it were to abandon nuclear energy entirely, renewable output would have to triple by 2035 to fill the gap. To realize such historically unprecedented renewable growth rates, a wide range of technologies would have to be exploited, many of which will be very expensive for the foreseeable future. Onshore wind energy, which could fill a portion of the gap, is among the cheapest at about $83 per megawatt hour, compared with $70 for coal and only $60 for natural gas. Yet solar energy is 3-4 times more expensive, at $224. Therefore, it is not surprising that governments had to subsidize renewables to the tune of $57 billion in 2009, according to the International Energy Agency. As of November of last year, the IEA expected this to quadruple to $205 billion by 2035. But with rich-country governments in fiscal retrenchment such expenditure looks implausible. The British government recently announced that it actually plans to cut solar subsidies. In short, a move away from nuclear energy is unlikely to fuel the green revolution that many hope for.

Note: The original text misattributed Upton’s quote to Steven Chu. We apologize for this error.

Levi: The Devil We Know

Spiegel: With Moratorium, Merkel 'Driving into a Dead End at Full Speed'