So report Emine Boz, Luis Cubeddu, and Maurice Obstfeld of the IMF —the net financial outflow from emerging markets that characterized the pre-crisis global economy is no more. Capital isn’t exactly flowing downhill, e.g. from rich, advanced economies to poorer emerging economies. The aggregate current account of the emerging world is close to balance.

In my view, there is both more and less than meets the eye here.

Less, because Asia’s surplus hasn’t actually changed much from the pre-crisis period. China’s surplus is a bit smaller after its 2016 stimulus. But the surplus of the NIEs is bigger than it was before the crisis (I do not quite understand how the NIEs can be considered advanced economies for discussions of the global flow of funds but be judged against the reserve adequacy standards for emerging economies—but that is a topic for another time). Japan’s surplus is back to roughly it pre-crisis level -- and the rise in Japan’s surplus in 2016 has partially offset the fall in China’s surplus. The split within East Asia between “emerging” and “advanced” is a bit arbitrary. All the major east Asian economies are importers of resources and exporters of manufactures. 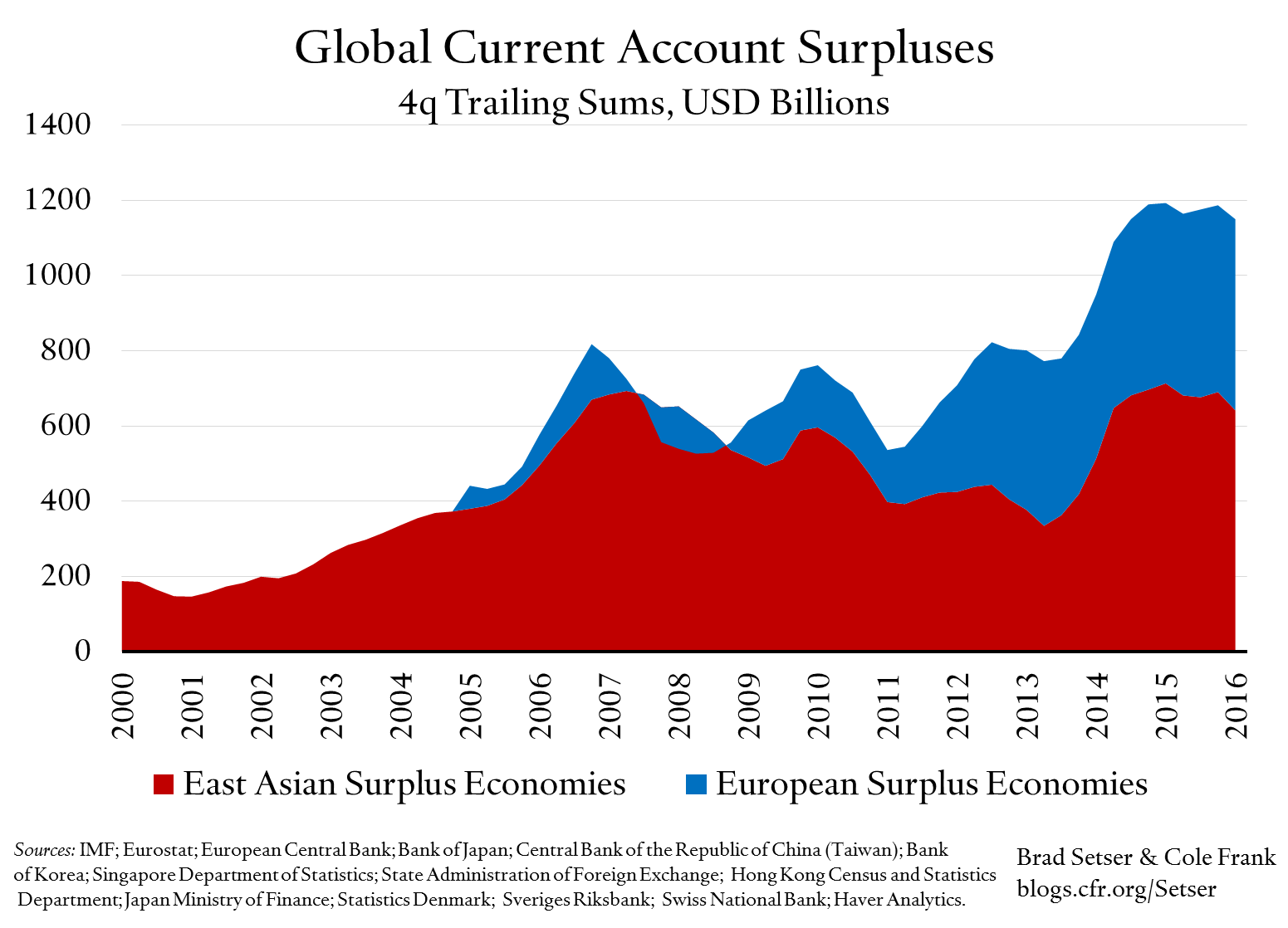 Emerging Asia is still in aggregate an exporter of savings to the world. Especially if India and others in South Asia are excluded, or if the NIEs are included.

More, because the relatively constant surplus in emerging Asia means there has been a giant swing in the aggregate current account balance of the commodity exporters. One proxy is the aggregate current account balance of the former Soviet Union, Latin America, the Middle East, and Africa. These regions of the world ran a surplus of $300-400 billion before the global crisis and a similar surplus in 2011 and 2012. They now run a deficit of similar size. 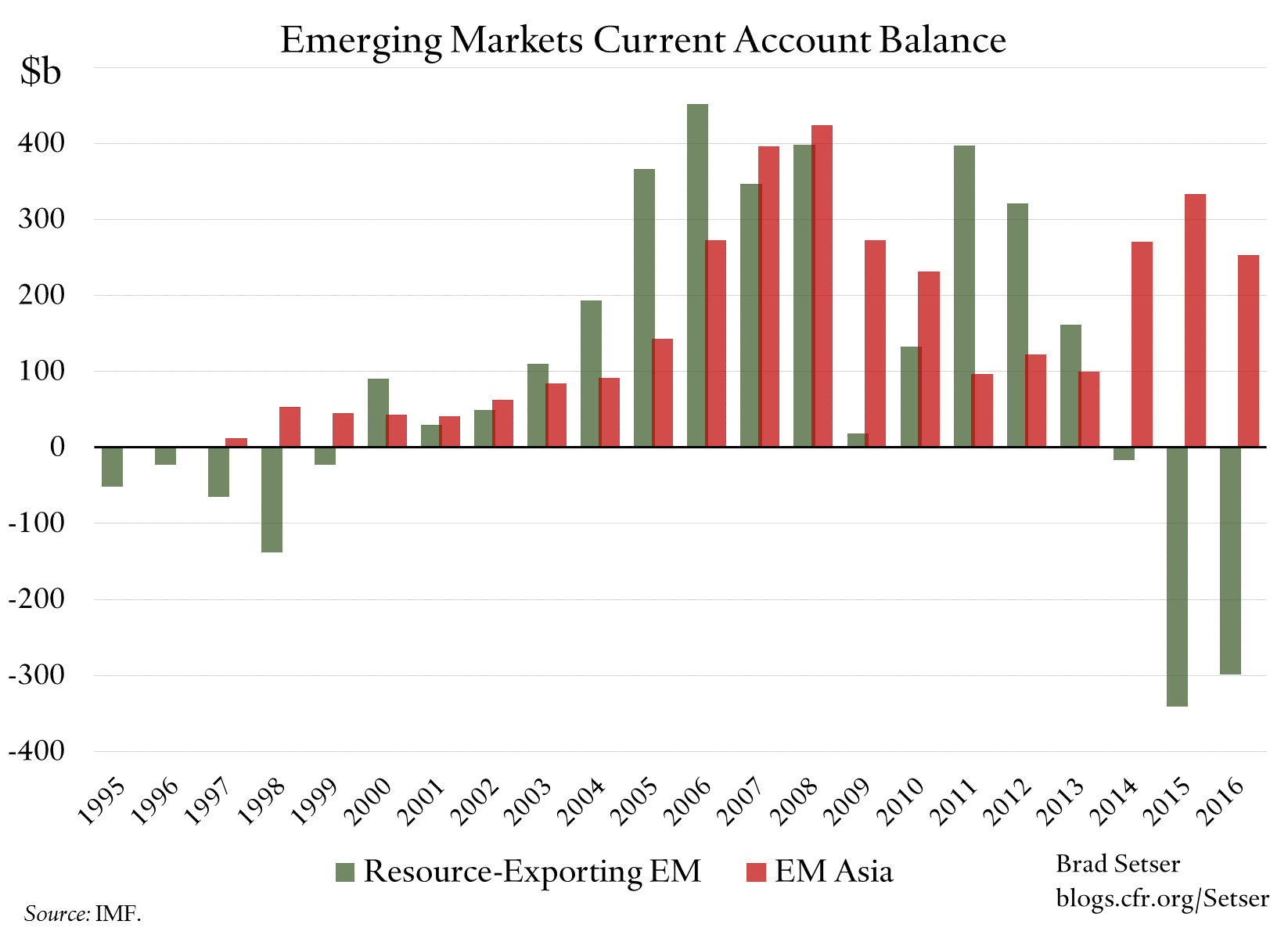 That is a major swing. And that swing has generated the “downhill” global flow of funds (especially if Chinese purchases of Saudi bonds are viewed as a downhill flow).

The reasons for that swing:

The first, obviously, is that commodity prices have come down off their highs, as global supply caught up with the surge in Chinese demand (in part because Chinese demand growth slowed in 2014 and 2015 before picking up recently on the back of China’s stimulus).

And the second is that the adjustment in the U.S. external deficit has come primarily from an adjustment in the U.S. commodity imports (relative to commodity exports)—not a fall in the United States manufacturing imports (relative to its manufacturing exports). Global oil markets have adjusted over time largely through a rise in U.S. and Canadian production, which mechanically reduces the need of the advanced economies to import from the resource exporting parts of the emerging world.

This asymmetric adjustment is a bit of a surprise—back in 2005, I assumed that the commodity deficit was constant, and the manufacturing balance would have to adjust. The opposite turned out to be true. 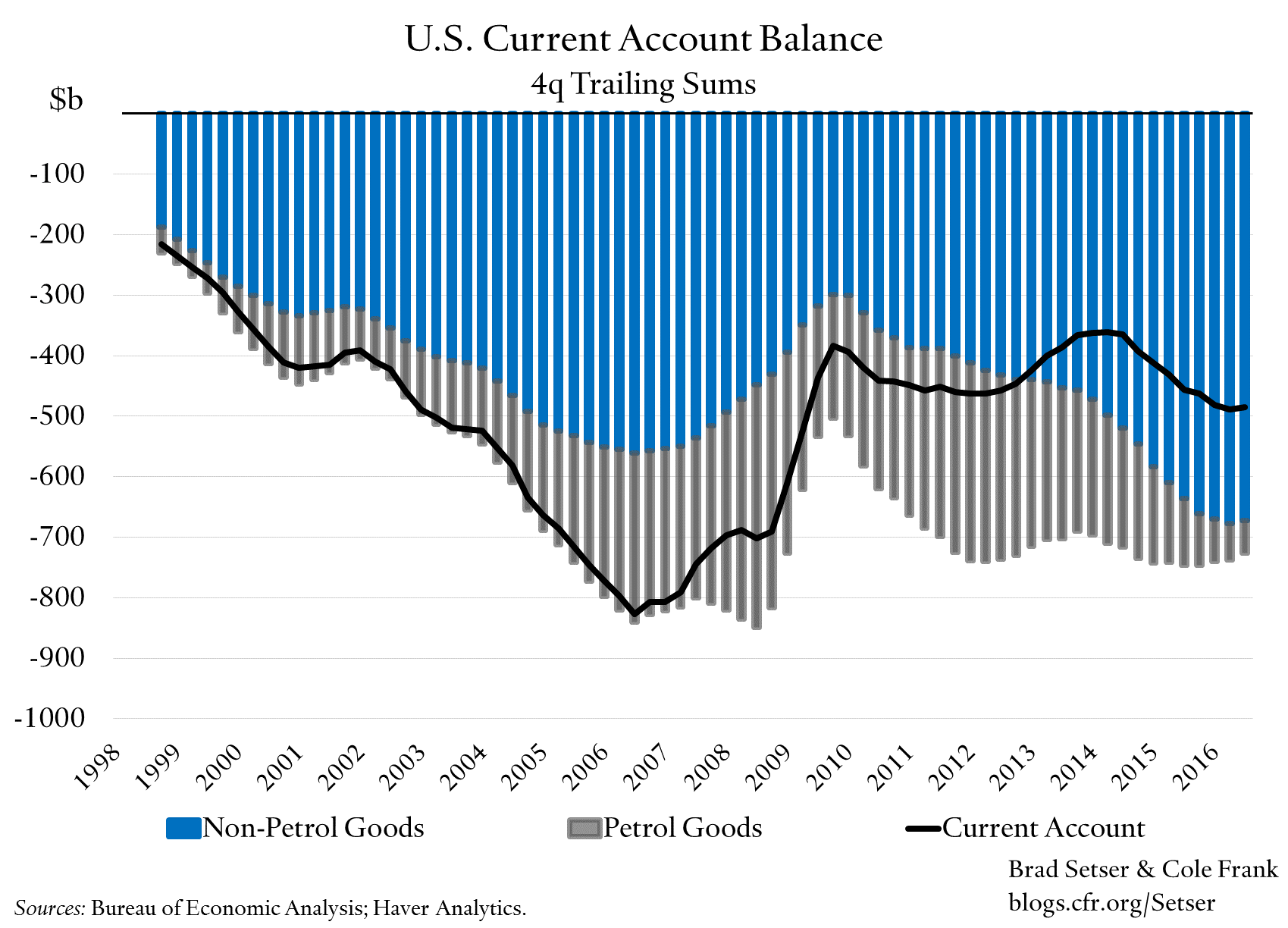 In fact, the U.S. manufacturing deficit is back at its pre-crisis (And pre-adjustment to the weaker dollar) level of around 5 percent of GDP. As it needs to be in a world where the big surpluses are in Europe and Asia, not the commodity exporting emerging economies. But that level of a deficit in manufactures is now "structurally" associated with a smaller overall external deficit as the deficit on petrol has fallen quite significantly.

I am leaving aside the other sources of adjustment—the modest rise in the services surplus, the rise in the offshore profits of U.S. multinationals and the like. The swing in the commodity balance is actually far bigger. 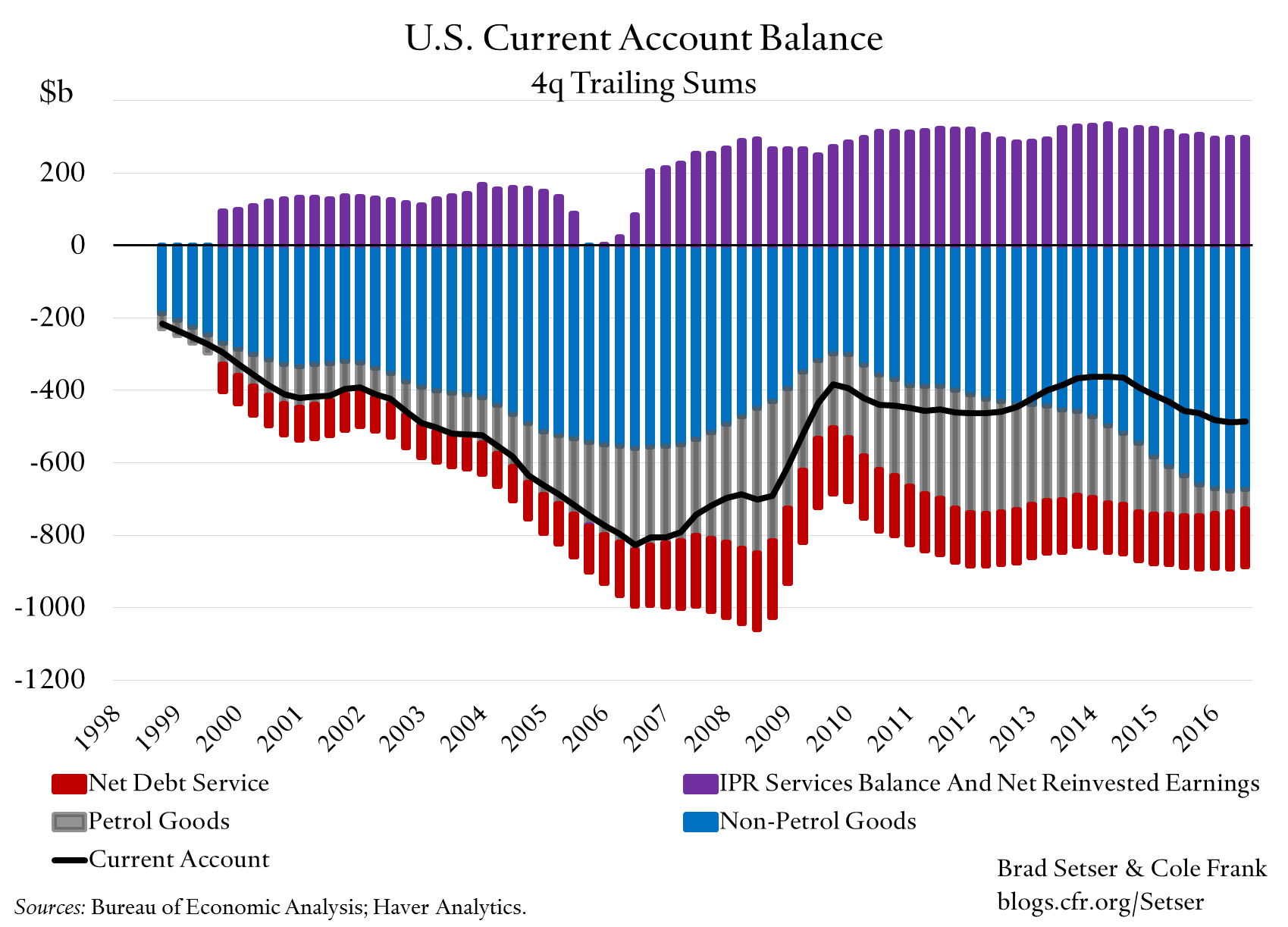 This all does have implications for the composition of financial inflows into the U.S. though. The uphill flow of capital was largely from the buildup of emerging market reserves, and the uphill flow of funds was largely into Treasuries, and to a lesser degree into Agencies. The end of the uphill flow of capital, in turn, has structurally reduced demand for Treasuries—as European fixed income investors, Japanese banks, and various institutions, some government influenced, that channel Korean and Taiwanese savings abroad all are a bit more willing to take credit risk than your classic reserve manager. Unless something changes, the official bid won’t be financing Trump’s fiscal deficits.

On the Cost of Holding Reserves. Sometimes It Is Not That High

The Dollar: The World’s Currency