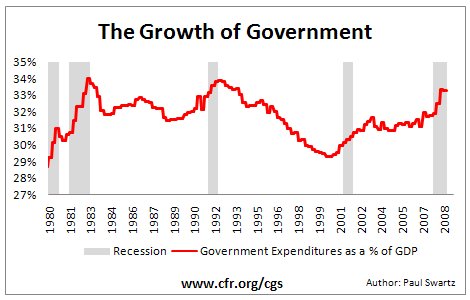 The financial crisis has triggered a sharp expansion in government. Some commentators portray this as a paradigm shift--a shattering of the faith in free markets and small government in the U.S. But our chart shows that past recessions have also caused government to grow as a share of the economy. If the effect is more powerful this time, that is because the recession is likely to prove longer and deeper-not necessarily because of shifting paradigms.

Stephens: Broken Banks Put the State Back in the Driving Seat

Calabresi: The G-20 Summit-A Vote of Confidence for Capitalism?

Faiola: The End Of American Capitalism?

Krugman: Deficits and the Future