The data at the back of the IMF’s latest WEO (table A16) indicate that the emerging world’s savings surplus stems from a “glut” of savings, not a “drought” of investment. 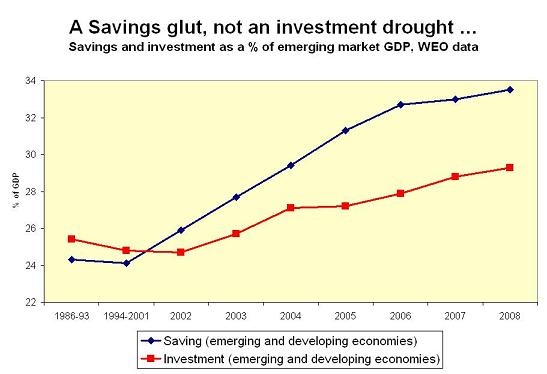 Government policy has played a big role in the high savings rates in both regions – whether the undistributed profits of Chinese state firms (a policy choice) or large fiscal surpluses of the Gulf financed by the undistributed profits of the Gulf’s state oil companies. It isn’t an accident that the emerging world’s savings glut has coincided with a rise of state capitalism – and a surge in demand from states and state enterprises for “flying palaces.” I suspect the emerging world’s savings glut largely reflects a glut in government (and SOE) savings.

Dr. Delong has argued that this savings surplus will persist for a long time, keeping US and European rates low and keeping housing prices in both the US and Europe higher than otherwise would be the case. Krugman’s fear that home prices need to fall significantly to bring the price-to-rent ratio closer to its long-term average won’t be borne out.

However, I don’t think it entirely implausible that savings rates in both Asia and the Middle East might start to converge toward their long-term average. What goes up sometimes also comes down.

An end to the emerging world’s savings glut would not be such a bad thing either. It would mean than the young and poor were supporting global demand growth – not the old and rich. That makes more sense to me.

Update: some type-os were cleaned up after the initial post.  PGL’s commentary on this post is also worth pondering, even if I am not fully convinced (see the comments).