Floyd Norris of the New York Times highlights a theme that I have touched on many times: foreign demand for US assets with any hint of credit risk has disappeared. Foreign demand for US corporate bonds -- a category that includes "private-label" asset-backed securities like repackaged subprime mortgages -- fell sharply in 2007 and hasn’t recovered. * And more recently foreign demand for US "Agency" bonds -- the debt issued or guaranteed by Freddie Mac, Fannie Mae, Ginnie Mae and the like -- has fallen sharply.

Norris highlights this shift effectively. But he didn’t quite go as far as he could have.

I would add three additional points:

1) Foreign central banks -- not private investors -- have led the shift out of Agencies toward Treasuries. We know this because of the data in the Fed’s custodial accounts, which show a clear shift at the end of July. From the end of 2004 to the mid 2008, central banks were only slowly adding to their holdings of Treasuries while their holdings of Agencies the the New York Fed ballooned from something like $250b at end of 2004 to close to $1 trillion at the end of June 2008. And since mid 2008, central banks have been selling Agencies and buying Treasuries in big way. The following chart plots central banks’ custodial holdings at the Fed against my best guess of central banks true holdings of Treasuries and Agencies. That guess comes from a model that I have been working on with Arpana Pandey of the Council that reattributes purchases through London to the official sector in real time, and thus avoids the jumps associated with the survey revisions.** Think of it was anticipating the outcome of the next couple of surveys of foreign portfolio investment (The survey data consistently revises central bank holdings of Treasuries and Agencies up and the UK’s holdings down). 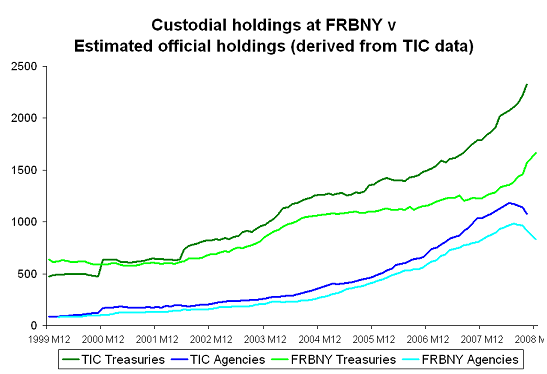 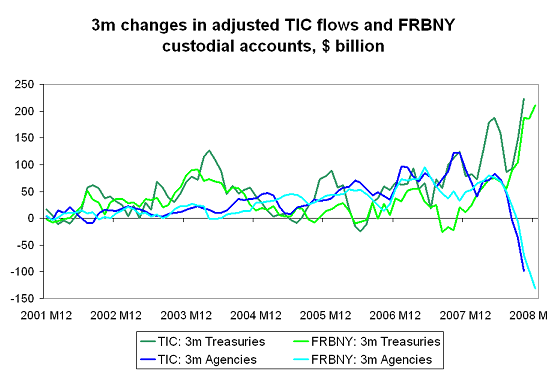 3) This shift destablized the Agency market. It kept spreads on "Agency" MBS high even after the US government effectively guaranteed Agency bonds -- and that kept mortgage rates up. Agency spreads only came down when the United States Fed indicated it would increase its purchases of Agency bonds -- effectively substituting a Fed bid for a Chinese bid.

The TIC data suggests that the big sellers of Agencies recently have been Russia and China. Russia I understand. Its reserves are falling, and its main goal is to stabilize its own market. China less so. Its reserves are apparently still rising. And while the Agencies have some risk, they have less risk than they did before the US government stepped in to backstop them. My best guess is that China’s leadership was surprised to learn that they held something like half a trillion of Agencies in the summer, and they told SAFE to reduce its holdings (and generally cut the risk in SAFE’s portfolio).

Fair enough. No country is obligated to take even a tiny bit of risk with its reserves. But actions have consequences. China’s swing away from Agencies means that it will soon have a close to $1 trillion Treasury portfolio -- which is a risk of another sort.*** It also raises the question of whether China has been quite as stabilizing a presence in the market as the US Treasury claims. China certainly didn’t have to sell Agencies to raise cash.

Indeed, the Fed has done a lot more to stabilize global markets in the second half of this year than the world’s reserve managers. Since the end of June, the Fed has lent close to $600 billion to foreign central banks that were short on dollars.**** The Fed effectively sold off its Treasury portfolio and took on risk in a downturn. Big reserve managers did rather the opposite: the data suggests that they were reaching for yield when times were hood (pushing down spreads) and then reversed course (pushing up spreads) when the going got tough.

*Much of that demand wasn’t really coming from foreign investors so much as from offshore vehicles that borrowed dollars short and lent long.

** My formula for adjusting official holdings requires positive purchases through London. In 2000 and 2001 the US was paying down the stock of Treasuries, so there weren’t net flows through London. as a result, the adjusted data series starts in M7 2002. Having annual survey data also helps.

*** Stay tuned for more on the details of China’s current portfolio -- I am putting the final touches on a set of revised estimates.

**** Other reserve assets -- the line item that corresponds with fx swaps -- have increased from a bit over $100b at the end of June to $682 billion in the last week of data. That is a rather substantial flow.