Central bank purchases of Agencies in 2007 (Setser and Pandey estimate, based on the survey data – the BoP data should be similar once it is revised to reflect the 2008 survey): $300 billion.

That is a one-year swing was close to $400 billion.

It just occurred to me that this was a larger swing – in dollar terms – than the swing in non-FDI private capital flows in Asia in 1997 and 1998. According to the IMF’s WEO database, developing Asia attracted $70 billion in portfolio and bank inflows in 1996. In 1998, $110 billion flowed out, for a total swing of around $200 billion.* 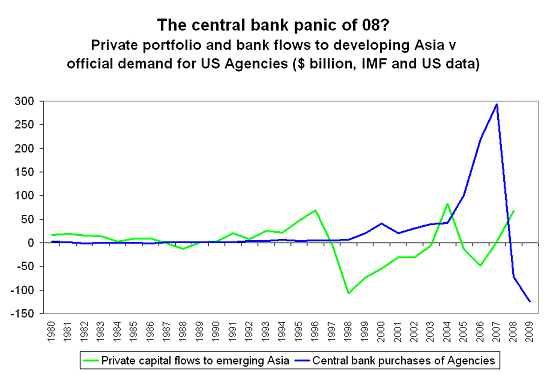 So much for the notion that sovereign investors are always a stabilizing force in the market.

Maybe sovereign funds are different (as the FT argues), but central banks ultimately proved to be rather loss adverse. They moved in mass into the Agency market for a few extra basis points, and then moved out faster than they moved in. Kind of like fickle private investors …

Of course, the comparison between central banks now and private investors in Asia is a bit unfair. Developing Asia back in the 1990s had a GDP of about $2 trillion. The US today has a GDP of around $14 trillion. So the swing in demand for Agencies is far smaller, relative to US GDP, than the swing in private capital flows was relative to Asia’s GDP. The swing in capital flows to Asia was in the realm of 8% of its GDP. Even if the fall in Agencies in 2009 is around $150 billion (it was $125b in the 12ms through February, but the basis for the y/y comparison will start to shift as the year goes on … ), the swing for the US will be more like 3% of US GDP. 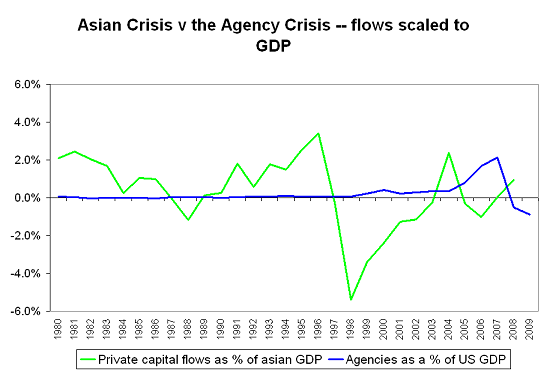 The comparison though should give pause to those arguing that sovereign investors are always a stabilizing force in the market because of their long investment horizons. If a few very large actors loses confidence in a certain type of debt, they can have a big impact.

The willingness of the official inflows (from places like the IMF) to offset the swings in cross-border private capital flows has, historically, been smaller. With the benefit of hindsight, a strong case can be made that the IMF’s financial response to the Asian crisis was too timid, with the IMF asking for too much adjustment and providing too little financing. Loans from the IMF and World Bank were clearly far too small to offset the swing in private capital flows. 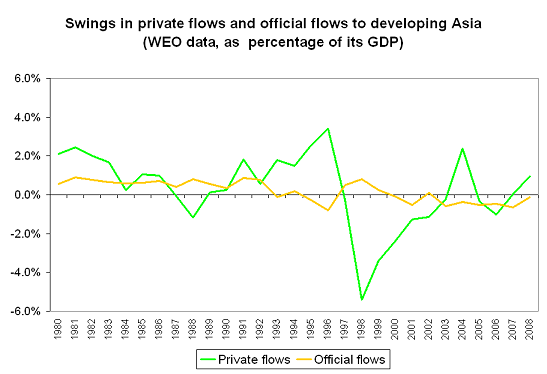 This isn’t just a historic debate either.

Eastern Europe has attracted large net capital inflows over the past few years. Bigger inflows, relative to its GDP, than Developing Asia in the 1990s. 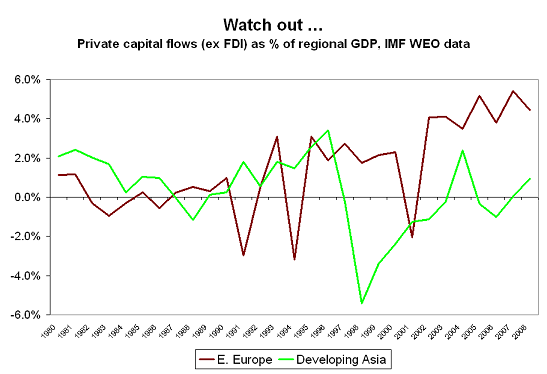 And by all indications Eastern Europe is now experiencing a comparable stop in private inflows. In all likelihood, the large private inflows of the past few years will turn into large private outflows. But there also now seems to be a greater willingness to use the IMF to provide more financial support than in the past …

* The swing would be larger if I added data for the Asian NIEs (including Korea, a crisis country) to the total. Alas, the IMF WEO data set doesn’t have BoP data for the NIEs. Help, please! I am a heavy user of the IMF data, and this is something that they should be able to add …