I have been reserve-obsessed for quite some time now.   The uphill flow of funds from the emerging economies to advanced economies strikes me as the defining feature of today's global economy.   That flow is entirely a central bank and sovereign wealth fund flow.

Indeed, the IMF's data makes clear that it is still mostly a central bank flow despite all the recent attention granted to sovereign wealth funds.  The central banks of the world's emerging economies accounted for $320 of the world's $340b in (valuation-adjusted) reserve growth in the second quarter, and $283 of the $303b (valuation-adjusted) increase in the first quarter.    Sovereign wealth funds are comparatively small, at least in flow terms.  They receive something like $30b in new inflows every quarter, or about 10% of the recent increase in central bank assets.   Obviously, a big shift in the way China manages its foreign assets could change this.

I estimate that the world's emerging economies -- if those emerging economies that don't report detailed data on the currency composition of their reserves acted like those who do report -- are now adding about $200b to their dollar reserves a quarter.  That is a pace sufficient to finance the entire US current account deficit.   Central banks continue to buy more dollars when the dollar is heading down than when it is going up to keep the dollar's share in the (aggregate) portfolio constant -- and effectively serve as the dollars buyers of last resort in the global financial system.

Private flows still matter, of course.  But right now private inflows roughly match private outflows, so all the heavy lifting required to finance the US external deficit is being done by the world's central banks.  Their willingness to hold dollars allows the US to finance itself in dollars even when there isn't a lot of global demand for dollar assets.

That was true in late 2003 and early 2004 as well.  Back then, though, Japan accounted for a large share of global reserve growth.  Emerging market central banks have never played as large a role supporting the dollar as they have recently.   Wonky details -- and a few graphs -- follow.

There isn’t any real evidence of diversification away from the dollar at a global level in the COFER data – at least among those countries that report data to the IMF.   The dollar's share of the reserves of those emerging markets that report data to the IMF actually rose a tiny bit, going from 60.2% in q1 to 60.45% in q2.  The tiny fall in the dollar's overall share came entirely from the fall in the dollar's share of industrial countries' reserves (from 71.7% to 71.45%).

The absence of more evidence of diversification in the global data -- and indeed, the absence of a slide in the dollar's share in q2 -- is a bit of a surprise.  Some key countries have diversified.  Russia, for example.  It almost certainly reports data on the currency composition its reserves to the IMF, it added a ton of reserves in q2 and it clearly reduced the dollar share of its reserves significantly in 2006.   The reported valuation gains on India's reserves also suggest that it has a reduced the dollar's share of its reserves, and now has an even lower dollar share than Russia.   I would bet that it also reports data to the IMF.  The absence of any change suggests that a set of countries that retain a very large dollar share in their reserves also increased their reserves significantly, balancing Russia out.   Brazil is the obvious candidate, but there must be others.

Some countries that I woudl guess do not report data to the IMF -- the UAE for one -- also seem to have helped the dollar out.   The UAE's reserves grew surprisingly fast in q1 2007 (no doubt due to speculation that it might revalue) and  Simon Derrick recently noted that its central bank holds over 95% of its reserves in dollars.  After the US refused to let Dubai Ports World buy a British firm that operated some US ports, it said it would reduce the dollar share of its reserves from 98% to 90%.  We are still waiting.

We are also still waiting for data on how much the UAE's reserves increased in q2.  It may report data on its overall reserve holdings a bit later than the global norm.

Someone certainly did not report their q1 reserve growth in a timely manner.   The new IMF data revises the q1 total up by $60b.   That is a relief.   I try hard to produce solid estimates for global reserve growth, and the initial IMF data for q1 didn’t track my own measures (which are based on the data reported by a subset of countries with large reserves).   The revised data makes much more sense.

But anyone who wants to try to estimate just how large a role central banks are playing in the financing of the US deficit has to make a few guesses – after all, about half of the recent increase in the world’s reserves has come from countries that do not report data on the currency composition of their reserves to the IMF. 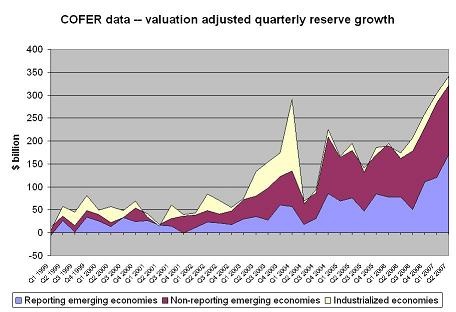 Because I suspect that China and a host of oil-exporting economies that peg to dollar are the main countries that do not report, I assume that the non-reporting countries have a somewhat higher dollar reserve share than the countries that do report.  I would put the dollar share of their reserves a bit above 70% -- so a bit higher than Menzie Chinn.  I also assume that these countries have kept the dollar share of their reserves constant.  I have added the Saudi’s non-reserve foreign assets to the total as well, and adjusted for China’s bank recapitalization and its fx swaps.   The China adjustment isn’t that important right now – the adjustment increased reserve growth in q3 and q4 of 2006 but lowered it in q1 and q2 of 2007.   The net effect is a wash. 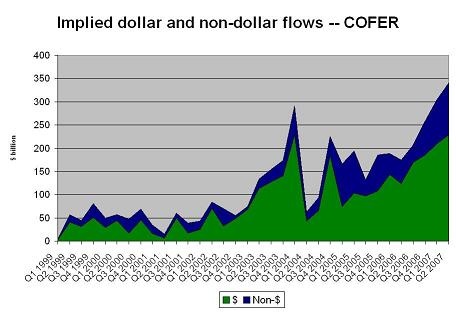 The same data can be presented in a slightly different way – as a rolling four quarter sum. 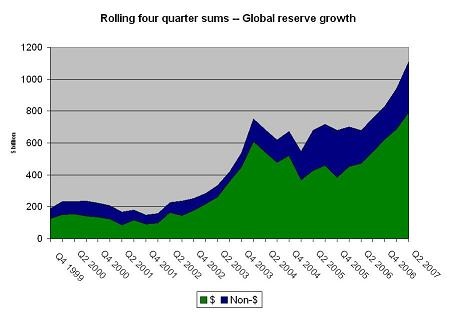 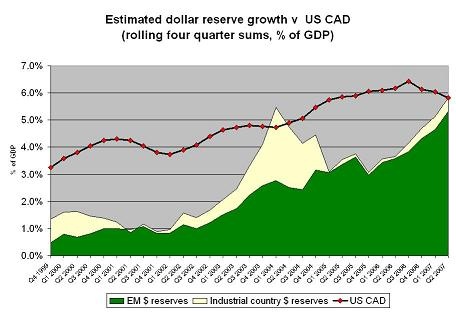 The striking thing, at least to me, in the rolling four quarter sum is not the fall in the US deficit but the rise in the share of the deficit financed by emerging market central banks.

Both the fall in the overall deficit and the rise in the share financed by emerging market central banks are more pronounced in the quarterly data. 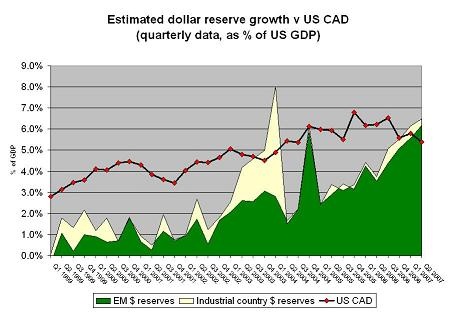 I am reasonably confident that my estimate of the dollar share of the reserves of those countries that do not report isn’t off by more than +/- 10%.   Since they are about ½ the total, the overall margin of error is probably +/- 5%.   That is why I am confident arguing that emerging market central banks have effectively financed the entire US current account deficit over the past couple of quarters.

Why is the US once again so reliant on official inflows?  Chalk up recent reserve growth to the fact the world didn’t slow when the US slowed.   That helped bring the US trade deficit down (particularly the non-oil trade deficit).    But it also dramatically reduced private investors desire to finance the US.    The official sector stepped into the gap  … largely because a host of countries continue to resist market pressure for their currencies to appreciate. 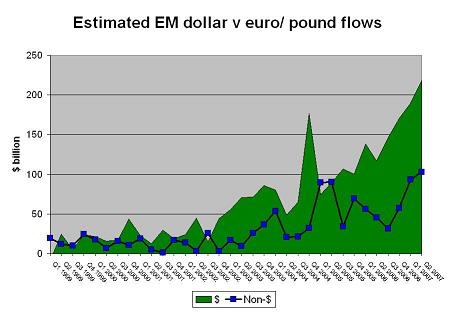 But I would argue that this very visible flow is a bit deceiving, since in the absence of $200b or so of dollar reserve accumulation (and a bit more dollar accumulation from sovereign wealth funds), the dollar would need to be (even) weaker and US rates would need to be higher to generate an equilibrium that private creditors would be willing to finance ….

I should note that the high-frequency US data doesn’t show quite as large official flows as the IMF data on dollar reserve growth (with a couple of key gaps filled in by assumption) implies.   But the high-frequency US data (the TIC data, and the BEA data that is derived from the TIC data) clearly fails to pick up a large share of Chinese, Russian and Gulf inflows.   The annual survey is a bit better, especially for China and Russia.   And when the US BEA data was revised after the last survey around, it – when combined with the BIS data on central bank dollar deposits in the global banking system (adjusted to avoid double counting the deposits in the US data) showed dollar reserve growth that topped my estimate of dollar reserve growth derived from the COFER data.

The pace of emerging market reserve growth does look to have slowed a bit in q3 .. particularly in August.   Capital inflows to the emerging world slowed, or even reversed – taking away one big source of reserve growth.  The one caveat – and it is a big one – is that the data from a lot of oil exporting economies isn’t yet available.   I would bet that reserve growth picked back up in September.

It likely will fall in October.   But only because China will be adding to its investment fund, not its reserves ...

My recap of the past week