Sometimes it only takes two numbers to tell a story. Look at two numbers in the current and capital account data the BEA released today.

The increase in official claims on the US – think central bank and sovereign funds – in the first quarter: $173.5 billion

The US current account deficit in the first quarter: $176.4 billion.

As a result, the rise in official claims was enough, barring any private inflows or outflows, to finance the entire US external deficit. 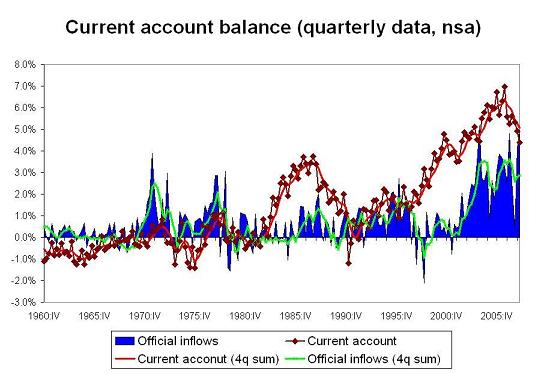 The $173.5 billion increase in official inflows – a stunning $695 billion annualized – comes overwhelming from $167.7 ($670 billion annualized) in purchases of Treasuries and Agencies. The $31 billion in other official inflows* (a total that includes about $20 billion in bank recapitalizations by sovereign wealth funds, the other $10 billion came in q4) was much smaller than the rise in plain old Treasury and Agencies holdings.

*Treasury, Agency and other purchases add up to over $167.7 billion; the official sector also reduced its bank deposits by around $27 billion.

This reinforces a point that I often try to make, without much success. The real foreign “bailout” of the US hasn’t come from the high profile purchases of stakes in a few US financial institutions. It has come from the ongoing purchase of Treasury and Agency bonds by central banks – as the official sector effectively made up for a short-fall in private demand for US financial assets.

Private inflows and outflows picked up from q3 and q4 – but remain much smaller than they were before the August crisis. Q1 Private outflows were $300 billion – more than the current account deficit. But a lot of private flows are short-term flows among the US and various offshore financial centers that tend to offset each other (inflows are matched by outflows). Official purchases (roughly $175 billion) were large relative to the sum of US current account deficit and long-term private outflows ($290 billion).

Let me see I can illustrate my point. Compare official inflows (in the US data) to net private long-term inflows in the US data (that is long-term inflows – long-term outflows). Both data series have been annualized by looking at the rolling four quarter sum. This data series suggests central bank purchases of US assets fell in 2007 v 2006. And it doesn’t show a big fall in (net) private demand for US assets after August. 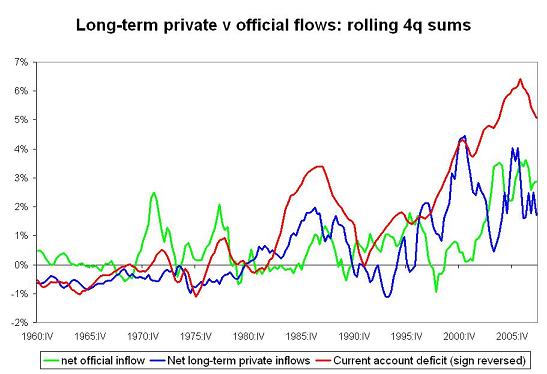 Now look at data – in billions of dollars – showing the buildup of official reserves (including the Saudis non-reserve foreign assets and funds China has shifted to the CIC but not the Gulf sovereign funds) relative to identified official dollar assets in the global data. I have fleshed out the IMF COFER data with an estimate for q1 global reserve growth based on national data sources. The data that Christian Menegatti of RGE and I follow track the IMF’s data closely; this isn’t a major source of error. 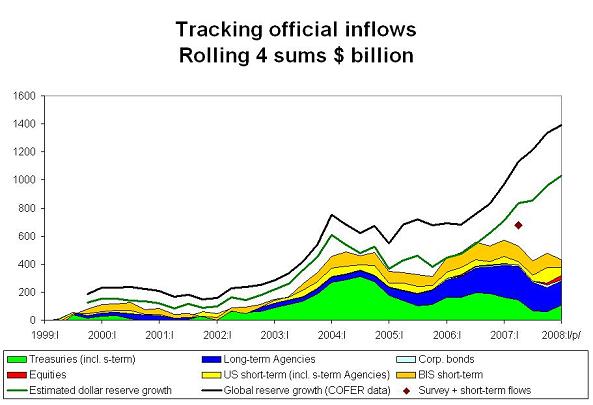 There is a big gap between the increase in dollar holdings that shows up in the US data and the known increase in central bank reserves – and a reasonable estimate of the increase in their dollar holdings. The increase in official holdings in the US survey data – which hasn’t been incorporated into the BEA’s data series – suggests that the 2007 data for official inflows to the US will be revised up in the next data release (see the dot in the graph). And then there is the huge buildup in “private” Treasury and Agency holdings in London since the last survey. Few close observers think this is really private money.

I decided to assume that the entire gap between my estimate of dollar reserves and recorded official inflows is official purchases of US assets that have been recorded as private purchases. 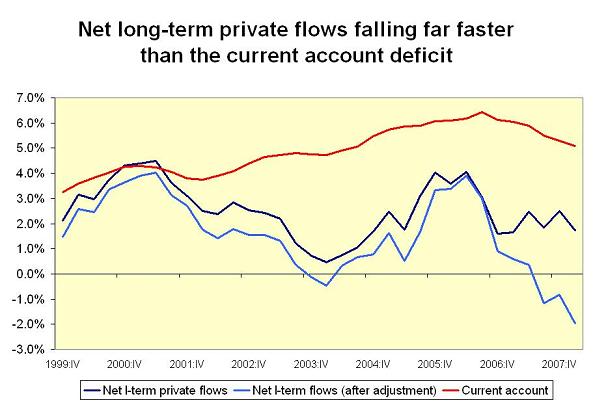 This adjustment is enormously arbitrary – but the existing data is known to be off, as it misses central bank purchases of US long-term debt by London, Singapore and Hong Kong financial intermediaries. Basically, I corrected a known fault in the data series – and in the process risk introducing new errors My estimate of dollar reserve growth obviously could be significantly off.

My “adjusted” data series though suggest a much bigger fall off in (net) private demand for US financial assets – and even more reliance on official flows than the “official” US data implies.

Why is the US taking the currency issue off the table in talks with China?