I tell pretty much anyone who cares to listen (and some who don’t) three things:

1) Central banks are providing the US with far more financing than sovereign wealth funds, and still have a much bigger impact (for better or worse) on US markets than sovereign funds. The high profile capital injections from sovereign funds into US banks are not representative to the bulk of official capital flows; boring old purchases of Treasuries and Agencies are.

2) The scale of growth in central bank foreign assets is hard to overstate, as is the extent to which central banks are now central to the financing of the US deficit. The US capital flows data significantly understate official purchases of US assets.

3) More and more of the increase in official assets is coming from places that either don’t transparently disclose the increase in the foreign assets of their governments (the Gulf doesn’t disclose inflows into its sovereign funds, China doesn’t disclose the pace at which it is transferring funds to the CIC or the extent to which the state banks have been forced to hold dollars) or that don’t disclose -- even to the IMF -- the currency composition of their reported reserves. As a result, the quality of the available data on how official actions are impacting and influencing markets is going down quite rapidly. (Graphs supporting all three points can be found at the end of this article)

The extent of these dark flows means that we really don’t know how central banks and sovereign funds are influencing the market. The actions of funds that do report data to the IMF may not be representative. Their activities could be overwhelmed by the actions of countries that do not report data.

But it is fairly clear that the countries that do report data weren’t responsible for the euro’s rise in the first quarter. Central banks that report data actually sold euros in q1 (the rise in the dollar value of their euro holdings is entirely due to the euro’s rise v the dollar). That means that they were classic "stabilizing" speculators, taking the opposite side of private market players. Or perhaps the opposite side of sovereign funds, the PBoC or another central bank that doesn’t report data to the IMF -- we don’t really know. If valuation gains are stripped out, about 80% of the "flow" from emerging economies that report data to the IMF went toward the dollar -- and between 85% and 90% of the (smaller) flow from industrial economies that report data went toward the dollar.

These euro sales were not quite enough to keep the dollar’s share of total reserves from slipping. Reporting emerging economies -- which have an average dollar share of around 60% -- are adding to their reserves at a faster pace than the industrial economies, pulling the global total down. And if the industrial economies would have needed to sell more euros than they did to keep the dollar share of their reserves from trending down.

But the slight fall in the dollar’s overall share doesn’t really matter. What matters is the huge overall flows from the official sector -- and the large flows going into dollars. Counting the $45 billion increase in Saudi Arabia’s non-reserve foreign assets and an estimated $60 billion transfer to the China investment corporation in q1 (but not the increase in Norway or the Gulf’s sovereign funds*), the overall rise in official assets, after adjusting for valuation changes, was $416 billion in q1 2008. That is a record; the total in q4 2007 was "only" $380 billion. Add in the increase in the oil sovereign funds and the true total likely topped $416 billion.

What does that imply? Well, the increase in the world’s dollar reserves in q1 -- over $300 billion, according to my estimates, easily topped the US current account deficit. If most of the increase in dollar holdings finances the US (not foreigners borrowing in dollars), then the official sector provided enough money to the US not just to cover the current account deficit but to finance an outflow of private capital.

The following chart shows the US current account deficit, my estimate of dollar reserve growth and my estimate for total reserve growth (counting SAMA/ Chinese state banks and the CIC but not the big oil sovereign funds) by quarter, all scaled to US GDP. 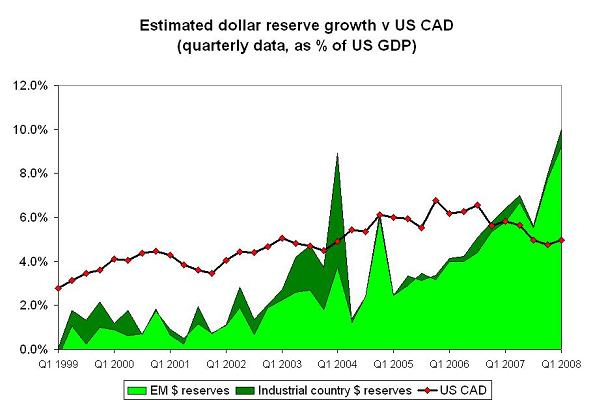 The same data can be presented on a rolling four quarter basis. 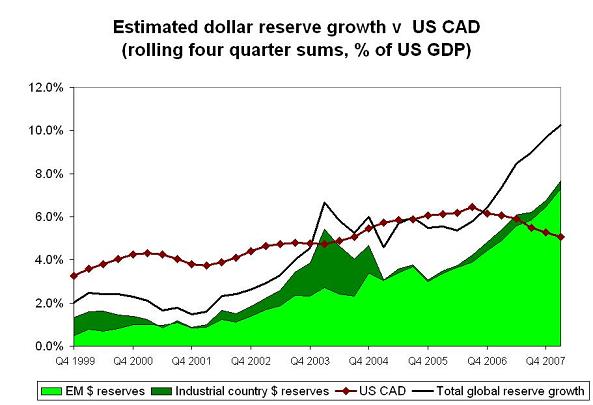 Other ways of presenting the data are also interesting. Consider my estimate of central bank purchases of assets denominated in different currencies. Central banks are buying more euros (close to $300 billion over the last four quarters) and pounds (nearly $80 billion over the past four quarters) than in the past, but the overwhelming majority of their asset growth is still going into dollars. 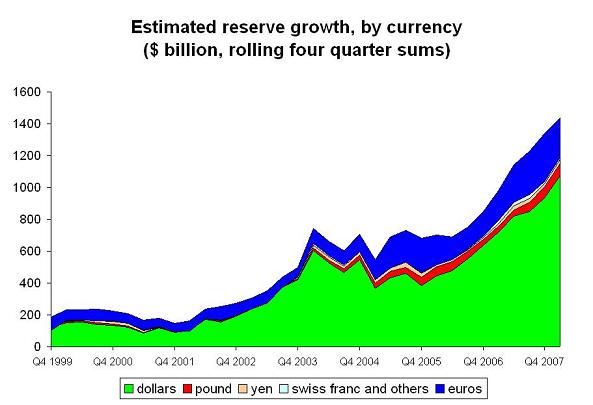 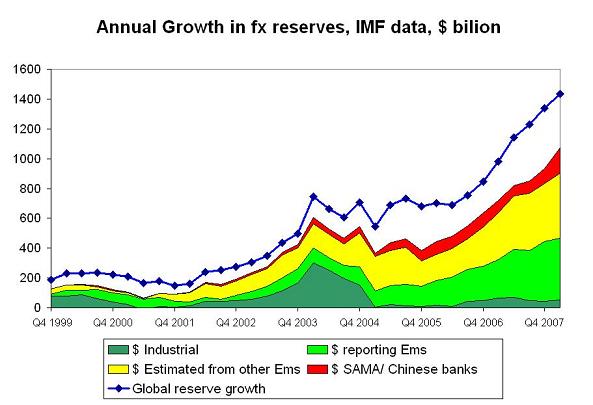 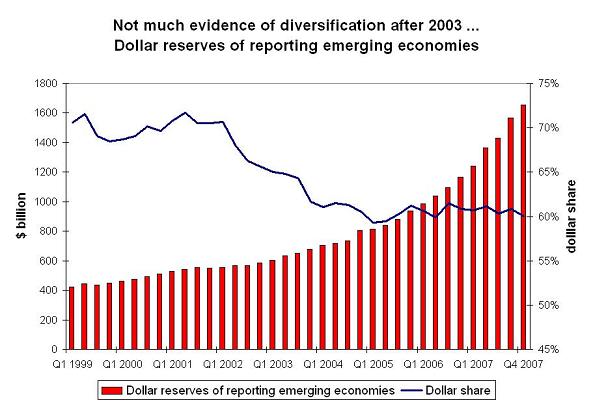 The overall story is pretty clear.

Overall official asset growth is now twice as large as the US current account deficit.

And the rise in official asset growth is leading to enormous purchases of US assets -- mostly debt -- by the world’s central banks.

*I hope to change the way my spreadsheets are set up soon. Because China was shifting reserves to the state banks, I have long adjusted the COFER data for China’s state banks. As a result, it is fairly easy to add in an estimate for transfers to the CIC. The roughly $60 billion I assumed was shifted to the CIC and the state banks is likely on the low side. Rachel Ziemba and I have developed a methodology for estimating inflows into the Gulf sovereign funds but I haven’t had time to combine the two spreadsheets to produce an integrated estimate of overall official asset growth. That should be ready by the end of the summer.

It is good to be the king (of oil)