My colleague at the Council’s Center for Geoeconomic Studies -- Paul Swartz -- has been tracking how the current US downturn stacks up against the typical post-War War 2 downturn.

The answer isn’t pretty. The fall in US industrial production for example already exceeds the typical fall in a recent downturn, and looks set to exceed the the worst fall in the post Word War 2 data. The dotted lines in the following graph are defined by the best and worst data points at this stage in the economic cycle in the post war data, and right now the fall in industrial production is very close to setting a new low.* 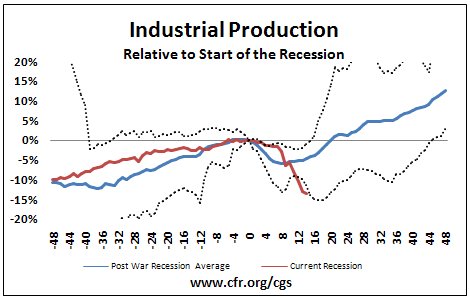 The scale of the fall isn’t a surprise to Dr. Eichengreen and Dr. O’Rourke.

Paul also plotted the current downturn against the trajectory in the 20s and the 30s. That also doesn’t make for pretty picture. But best as Paul can tell, the fall in US industrial production now isn’t quite as bad as in the 1930s. 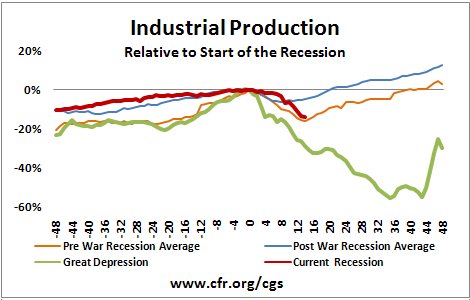 Is there any good news? Yes.

The US isn’t making the same macroeconomic errors as is it made in the downturn than became the Great Depression. The US, for example, has implemented a large fiscal expansion to support demand far faster now than back then. But make no mistake, Paul’s charts leave little doubt that the current downturn is -- on nearly every measure -- as bad as any downturn since the Depression. That is the fundamental case why governments need to be taking bold actions now to slow the fall in global activity.

Do check out his updated charts, and let me know what you think. 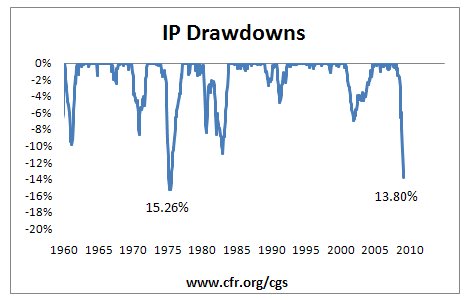 His chart also clearly illustrates how, until recently, volatility in industrial production seemed to be falling over time. The great moderation, alas, is now clearly over.