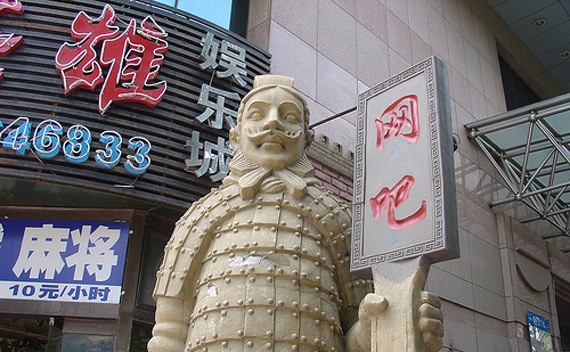 In his Posting last week on the South China Sea, Evan raised some points on China and the global commons that I want to riff on in the realm of cyberspace.

As Evan notes, China has reaped immense economic benefits from what the President’s May 2010 National Security Strategy calls "the connective tissue around our globe upon which all nations’s security and prosperity depend." On the sea, this has meant access to global markets, oil, and natural resources.  In cyberspace, China has both an incredibly vibrant domestic market (420 million netizens, 165 million blogs, 805 million cell phones) and a growing presence in global ones.  According to the Internet White Paper, in 2008 Internet-related industries generated a turnover of  approximately $95 billion, with sales of PCs, modems, web-enabled phones, routers, and other Internet-related equipment reaching $74 billion, or 10 percent of the country’s global trade.  Chinese firms now compete in international markets in both hardware and software.

If the United States and China are speaking past each other about navigation rights, they are engaged in a dialogue of the deaf in cyberspace.  While Washington wants to talk about cybersecurity—the protection of computer and Internet infrastructure from hacking—Beijing is more interested in information security—the protection of computers and networks plus the control of "harmful" content.  From the beginning, China has thought of the Internet as both essential to economic growth and a threat to domestic stability.  Or as the White Paper puts it, “To build, utilize and administer the Internet well is an issue that concerns national economic prosperity and development, state security and social harmony, state sovereignty and dignity, and the basic interests of the people.”

This failure of communication was on full display this week.  In the Pentagon’s annual report of Chinese military capabilities, the Defense Department spoke of intrusions that exfiltrated information and the fielding of "cyber warfare capabilities to hold targets at risk throughout the region." The Chinese response: we have no idea what you are talking about. Hu Qiheng, president of the Internet Society of China (ISC), told the Chinese news agency Xinhua, "I’ve never heard about any plans by China to develop its cyberattack forces, not to mention China’s so-called ’organized cyber intrusion’."

At issue is contesting views of cyber as a global commons.  The United States has essentially said it has an interest in an Internet that is global, secure, and open (see, for example, Secretary Hilary Clinton’s Internet Freedom speech).  China has an interest in one that is secure, possibly global, and certainly not open.  Looking at efforts to control the Blackberry in India, UAE, and Saudi Arabia,  Beijing is likely to conclude that its vision is the more popular one.

This gap is going to be hard to close.  There were, however, some hopeful signs over the summer. China was one of fifteen countries that agreed to a set of recommendations on how to move forward with international discussions on cybersecurity at the UN.  Senators Dianne Feinstein, Mark Udall, and Kay Hagan reported that Wu Bangguo, National People’s Congress Standing Committee Chairman, suggested that cybersecurity be added to the topics discussed at the annual Strategic and Economic Dialogue between the United States and China.

Beijing is not likely to fundamentally change its attitude toward cyberspace in the near to mid-term, given concerns about domestic stability.   So while the United States should continue engaging Beijing on the topic, it should also redouble its efforts with India and others so that we can try and build a common vision of cyberspace as a global commons.

Indonesia: Winning on Terror, but not on Tolerance