Premier Wen knows how to get attention; all he has to do is raise a few doubts about China’s ongoing willingness to keep on buying US assets. The FT, the Wall Street Journal and the New York Times -- not to mention the White House -- all took note.

"We have lent a huge amount of money to the U.S. Of course we are concerned about the safety of our assets. To be honest, I am definitely a little worried.” He called on the United States to “maintain its good credit, to honor its promises and to guarantee the safety of China’s assets.”

I don’t doubt for a second that China is starting to worry that the scale of US issuance of Treasuries will reduce what might be called the scarcity value of China’s existing Treasury portfolio; creditors, after all, generally think debtors should limit the amount of new debt they take on. But I am not convinced that Wen’s comments were driven entirely by China’s worries about its Treasury portfolio either.

Remember, that Treasuries account for only about half of China’s US portfolio. China likely has about $750 billion Treasuries. But it also has around $500 billion of Agencies. It could have about $150 billion of US corporate bonds. It probably has invested in a range of money market funds, not just reserve primary. And China had about $100 billion in US stocks in the middle of 2008 -- though those stocks are now worth substantially less. 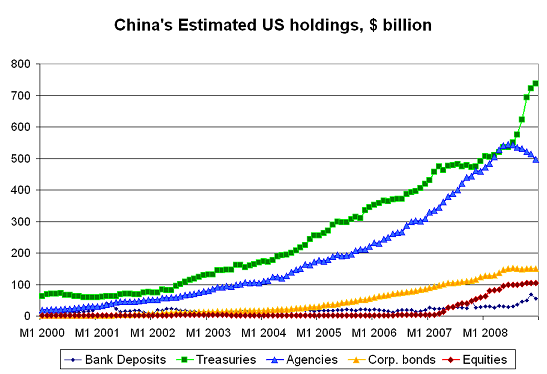 Wen’s comments, at least to me, seemed to echo the comments that a host of anonymous Chinese officials made to the Wall Street Journal in January. Their main concern? That the US government wouldn’t backstop bonds that China thought had the implicit backing of the US government. China wouldn’t mind at all if the US provided a full faith and credit guarantee to the Agencies -- or to any other financial institution that China had lent money to -- even if this meant a larger US government debt stock. Dean, Areddy and Ng of the Wall Street Journal :

“Leaders in China, the world’s third-largest economy, have been surprised and upset over how much the problems of the U.S. financial sector have hurt China’s holdings. In response, Beijing is re-examining its U.S. investments, say people familiar with the government’s thinking. … Chinese leaders have felt burned by a series of bad experiences with U.S. investments they had believed were safe, say people familiar with their thinking, including holdings in Morgan Stanley, the collapsed Reserve Primary Fund and mortgage giants Fannie Mae and Freddie Mac.”

"One of China’s main criticism of US policy is simple: the government didn’t stand by institutions that China expected the US to support .... China’s leaders believed that China’s investments in the US financial sector would be protected ... . They weren’t. At least not consistently. And that clearly has had a big impact on China’s leadership. And if I had to guess, I would guess that the CIC was not the only institutions in China that had a bit of direct exposure to Lehman. SAFE turned conservative at the same time as CIC."

The available data -- and the TIC data only goes through December -- suggests that China has lost confidence in all the assets that it thought had the implicit backing of the US government, not in bonds backed by the full faith and credit of the US government. Treasuries are the one US asset that China is still buying. The following chart -- which shows my best estimate* of China’s purchases on a rolling 3m basis -- speaks for itself. 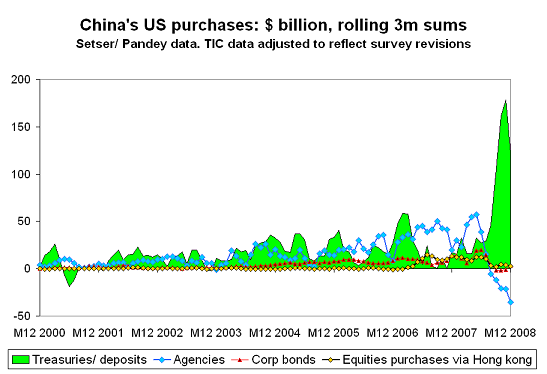 To me the real story is that China’s reserve managers sought -- more than most central banks -- to boost returns by taking on more risk. Above all they opted for Agencies rather than Treasuries, and at one point had more Agency bonds than Treasuries. But China also started to buy large quantities of US corporate bonds in 2005. And then in early 2007 it started to buy US equities. The big surge in Hong Kong’s purchases of US equities in the TIC data is almost certainly a reflection of the activities of SAFE’s Hong Kong office.

As a result, China was caught in an uncomfortable position this fall. And it responded by dramatically increasing its purchases of Treasury bonds. It clearly lost confidence in Agency bonds -- and seems to have slowed its purchases of US corporate bonds and US equities as well.

I consequently interpreted Wen’s statement as a statement of concern about the health of China’s entire US portfolio, not just China’s Treasury portfolio.

Of course, the decisions China took last fall mean that China’s portfolio is now more concentrated in Treasuries. It consequently has more reason to worry about the safety of its Treasury portfolio than in the past. At the same time, China wouldn’t have bought as many Treasuries as it did in the past few months if it didn’t still think that Treasuries are the safest US asset.

2) China is torn between its interest as a creditor and its interests as an exporter. China’s commercial interests would be best served by an even larger US stimulus, one that helped spur US demand for China’s goods. China’s reserve managers though worry that the US won’t be able to finance a large stimulus and thus are worried that a rise in Treasury supply would reduce the value of China’s existing Treasuries. Never mind that China is sitting on large mark to market gains on all the Treasuries it bought back when 10 year Treasury yields were above 4% .... and never mind that China’s reserve managers -- though not its exporters -- hav benefited from the dollar’s rally.

"The conflicting financial currents pose a dilemma for Beijing. The smaller the United States stimulus, the less its borrowing, which could help prevent interest rates from rising. But less government spending in the United States could also mean a slower recovery for the American economy and reduced American demand for Chinese goods."

If Wen wants the US to run a smaller fiscal stimulus, I rather doubt it will be able to hit his growth target and also brag that China’s fiscal deficit won’t top 3% of its GDP ...

3) China is torn between its desire to avoid taking losses on any part of its portfolio and its concerns that it now has too much exposure to the one borrower that is almost sure not to default -- the US Treasury. After several years of taking on credit risk and market risk in an effort to increase returns, whether by buying Agencies rather than Treasuries or by taking on a bit of equity market risk -- China’s reserve managers have returned to classic reserve assets. But given the size of China’s portfolio, that means that they now hold a huge sum of Treasuries. And concentrating China’s portfolio in Treasuries has risks of its own; the US isn’t going to default on its Treasuries -- but that doesn’t meant that holders of Treasuries aren’t exposed to other risks, not the least the risk that the dollar won’t maintain its value over time.

China’s desire to have the US government guarantee the safety of its holdings of Agencies and the bonds issued by US corporations is also somewhat at odds with its concerns about the rapid growth in the outstanding stock of Treasuries. Bailouts do have a fiscal cost.

China’s overall portfolio has actually held up fairly well in the crisis. China was only beginning to shift out of traditional reserves assets when the crisis struck. Its overall exposure to risky assets, setting the Agencies aside, remains small. A US pension fund that had China’s modest losses in 2008 would be thrilled. But the losses China took on its forays into riskier assets seem to have focused China’s attention on the cost of accumulating so many foreign assets in a very real way ...

No one forced China’s government to hold a $1.95 trillion reserve portfolio -- a total that rises to over $2300 billion if the PBoC’s $184 billion in other foreign assets, the CIC’s foreign portfolio and the State banks foreign portfolio is added to the total. China’s huge foreign portfolio is function of China’s own decision not to allow its currency to appreciate even as China’s current account surplus soared and private money poured into China.

China long viewed its massive reserves with pride, as a symbol of China’s strength. But they are also a burden. In some sense, China is only now waking up to the costs of holding far more reserves than in really needs. China is likely to take losses on China’s reserves -- as it in effect overpaid for foreign assets to hold its currency down. If it invests its portfolio unwisely, it may also take additional losses. That in some sense is the bill for using the exchange rate to support China’s exports; it is a cost that China’s taxpayers will have to pick up. I have long argued that the benefits (rapid export growth, lots of investment in the export sector) associated with China’s exchange rate policy were front-loaded while the costs (export dependence, losses on China’s reserves) were back-loaded. The bill for subsidizing China’s exports during the boom is just now coming due.

Update: Business Week’s Mike Mandel draws out something that I alluded to, namely that Chinese state investors likely hold some of the bonds issued by US financial institutions.

* The methodology used to construct these estimates is described in the paper that I did with Arpana Pandey on China’s US portfolio. Our estimates are based on the TIC data and the survey data. We simply smooth out the jump in China’s holdings associated with the survey by re-attributing some purchases through London and Hong Kong to China. China’s holdings of corporate bonds don’t show up in the survey (even though large monthly purchases suggests that China has a significant portfolio). Here I have summed up flows to estimate China’s stock. The data presented here differs from the data in our paper because it has been updated to reflect the results of the last survey, which showed substantially fewer Chinese Treasury purchases from mid-07 to mid-08 than we has expected on the basis of the revisions in the June 07 survey. I also explained how I try to track China’s portfolio in this Planet Money interview with Adam Davidson.