My Asia sources tell me that China is willing to let the yuan appreciate only if the yen rises first, and they are actively buying yen to make sure that comes to pass

Welcome to a world where large state funds are the dominant player in the market.   China certainly could try to use its financial might to try to help it achieve commercial goals -- like helping Chinese firms compete with Japanese firms.

And while there are tentative signs that China is shifting its portfolio around, I am a bit more cautious than either Statfor or Smith.

China’s State Administration of Foreign Exchange is buying fewer Treasuries, but it may just be buying more Agencies.   China probably is also buying more yen.  But that may just be because it is buying more of everything as its reserves swell.   We really don’t know.   SAFE certainly doesn't tell us.

I personally would be surprised if China has made a major shift away from dollars – and not just because Li Yang of the Chinese Academy recently cautioned against abrupt portfolio shifts.

Why?   See the following graphs, the first two prepared with help from Arpana Pandey of the Council on Foreign Relations.

The first graph plots known Chinese holdings of US assets (the data comes from the US Treasury's Treasury International Capital data, but you need a guide to find it …) against China’s reported reserves. 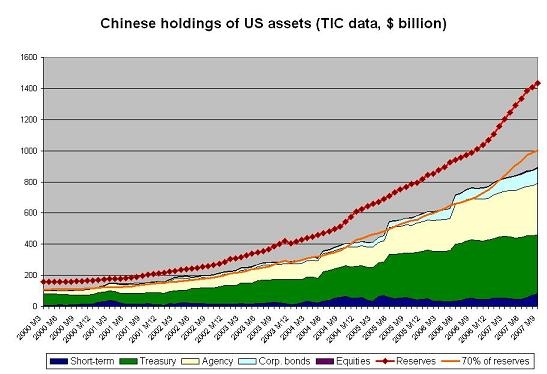 A few things jump out:

First, China’s recorded holdings of US assets tend to jump sharply in June (see June 2004, June 2005 and June 2006).    There is a simple reason:  The Treasury survey data has consistently shown a larger increase in Chinese holdings than the increased implied by the monthly TIC data.   There is no particular reason to think that this has changed.  When China’s June 2007 holdings are revised following the release of the next survey data (early next year), China’s holdings of US debt will be revised up.

Second, total Chinese holdings of US assets are rising.  Indeed, they seem to be rising at pretty much the same rate as they rose between mid-2005 and mid-2006.     Now it is certainly possible to argue that they should be rising faster, since the pace of China’s reserve growth picked up.   But it is equally possible to argue that China is just buying more through offshore centers (Hong Kong, London), so the survey revisions will just be bigger.

The US data isn't picking up everything China owns. Then again, the State Administration of Foreign Exchange (the agency that manages China’s reserves) isn’t the only entity in China that holds the state’s assets.

The China Investment Company has some foreign assets (though not many right now).   And the state banks also have a foreign portfolio.   Some of that portfolio is financed out of money that they have raised themselves.   But a decent chunk is financed out of money borrowed (through swaps) from the central bank as well as the reserves injected into the state banks as part of the recapitalization process.  So long as the foreign exchange risk resides with the PBoC/ the MoF/ CIC I would consider this to be a form of hidden reserves.  Basically, the management of some of the state’s foreign assets has been outsourced to the state banks.

The second graph makes a slew of adjustments – for state bank recapitalization, for known swaps between the PBoC and the banks, for the unwinding of some swaps tied to the bank and for the financing of the CIC -- to try to get a better picture of the total foreign assets held by China's central government.   I won’t bore you with the details of the adjustment.  Suffice to say that it is the best that I can do at this stage – and that Logan Wright (Stone and McCarthy/ Survived SARs) helped me improve my data on the swaps. 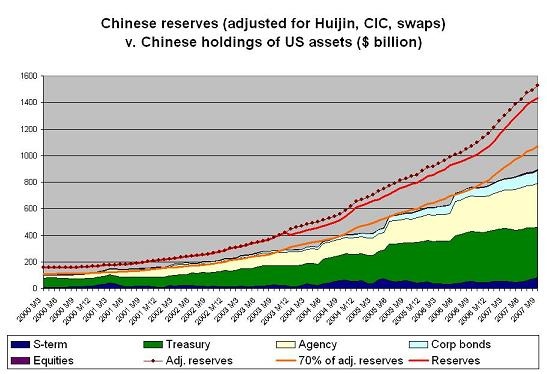 The higher level of total assets -- together with unchanged US holdings -- suggests a somewhat lower US dollar share.  The survey revisions -- the jumps in Chinese holdings every June -- seem to have brought China’s US holdings up to around 70% of the state’s total foreign exchange exposure over the past few years.  There is no guarantee that the next survey will similarly bring China’s holdings up to the line representing 70% of China’s known foreign assets.   But there is still a reasonable probability that it will.

Incidentally, the data from China’s net international investment position indicates that Chinese state banks and other large institutional investors hold far more debt than the roughly $100b of additional assets implied by my adjustment.  The NIIP data indicates that Chinese portfolio investment increased from $117b at the end of 2005 to $229b at the end of 2006, with particularly rapid growth in the second half of 2006. That suggests my adjustment probably still understates the swaps the PBoC has done with various state banks/ institutional investors -- either that or China has persuaded more state institutions to take unhedged dollar exposure.  Adding the $230b in known portfolio investments to China's known reserves would bring China’s total foreign portfolio investments to around $1.7 trillion at the end of October. It also implies -- in my view, roughly $1.2 trillion in total Chinese exposure to the US dollar. 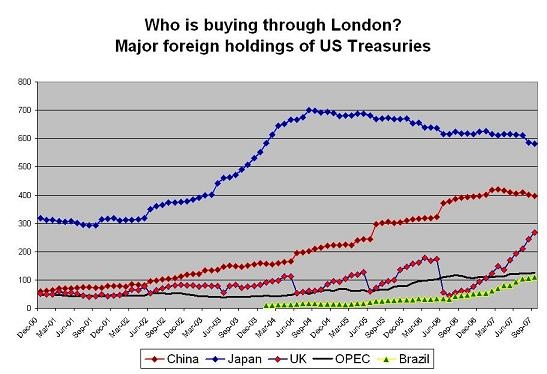 A four things stand out.

Third, the revisions haven’t increased OPEC (mostly the Gulf countries) holdings that much.  This is likely because the survey doesn’t pick reserves that are managed by outside fund managers, and the Saudi Monetary Agency makes much more extensive use of outside fund managers than the PBoC/ SAFE.

Fourth, it is reasonable – based on past patterns and the strong increase in China’s reserves -- to think that a reasonable fraction of the roughly $125b increase in British holdings of Treasuries from mid 2006 to mid 2007 represents Treasuries that London-based banks bought from the US and then sold to China (or sold to Singapore and Hong Kong banks who then sold to China).   China’s total Treasury holdings are likely to be closer to $500b than $400b.

Incidentally, China is possibly worried that its Treasury holdings will soon surpass Japan’s holdings. China’s holdings are rising, and Japan’s reserve managers are slowly cutting back on their Treasury holdings and buying more Agencies (or at least they were until the recent spate of bad news about the Agencies financial health … ).

That is one potential reason for China to scale back on its new Treasury purchases.   If China took the top position in the league table the US publishes every month, its actions would get even more scrutiny in both the US and Japan.

At this stage, I don’t think we have enough data to conclude that China has definitely cut the share of its reserves held in dollars, as opposed to buying more of everything as its foreign assets swell.  That said, a change in the way China manages its reserves is certainly possible.   It has happened in the past.

In June 2003, the US data suggests that China's total holdings of US assets were substantially higher than 70% of its reserves.   By mid 2004, the dollar share was down to about 70% (taking into account funds shifted to the banks through Central Huijin).

During this period – a bit earlier actually – it also changed the way it buys US debt so that a smaller share of its purchases showed up in the TIC data.   More recently, it has increased the share going to Agencies and corporate debt.  It has been particularly active in the market for so called “Agency MBS” (mortgage backed securities with an Agency guarantee) over the past couple of years.  I used to think the “corporate debt” purchases that register in the US data primarily reflected Chinese purchases of private mortgaged-backed securities – but I am now no longer so sure.  The Treasury data only shows $9.5b in mortgage-backed ABS (see table 25) as of June 2006.  That number is low given the disclosed subprime exposure of China’s banks.   The US data isn't picking up all Chinese purchases of MBS.  But Chinese banks in particular may have been buying more floating rate US corporate debt than I initially thought.

China probably invests in more different currencies than most central banks, just as it invests in a broader range of US debt than most central banks.  The diversity of China’s holdings reflects, among other things, the pressures associated with the sheer size of China’s assets.   But it also likely reflects a series of policy decision taken over the last five years or so.  Reserve managers operate within a mandate set from on high.

Back to the initial question.

Has China cut back on its purchases of Treasuries, at least relative to the overall growth in reserves?  Almost certainly.  There appears to have been a slowdown in Chinese purchase of Treasuries over the past six months relative to the trend implied by the unrevised data.    Total holdings usually go up slowly between the surveys -- and then get revised up even more.  Recently total holdings haven't been going up. That suggests something is changing -- though we won't really know until we learn what share of the increase in the "UK's holdings" are really an increase in Chinese holdings.

Has China increased the share of its vast holdings invested in yen?   Possibly.   The US data doesn’t allow us to answer that question.    China could increase its yen allocation by 1% (around $15b) or even more without it ever registering in the US purchase data.   The margin of error is simply too big.   But it is certainly plausible that China has opted to increase its exposure to Japan.  The CIC almost certainly will have a higher yen share in its portfolio than the PBoC (it caused a stir by advertising for managers with knowledge of the Japanese market), but the CIC hasn’t really started to make big investments yet.

Two things though should be clear:

Indeed, the most important shift that shows up in this data isn't any change it the overall composition of China's portfolio.  It is that the pace of China’s reserve growth really slowed in q3 – and even more if you add in October.    It slowed more than I think can be explained by the funds shifted to the CIC.   I suspect that a policy decision was taken to “persuade” both China’s banks and state-owned firms to hold more foreign exchange, and perhaps to hold more foreign exchange on an unhedged basis.

More on the slowdown in the Chinese reserve growth, Michael Pettis’ intriguing suggestion that China increase its dollar allocation (better to buy at the bottom than the top) and the CIC later …