I am at a conference and haven’t had time to delve into the results of the stress tests -- or to really delve into Friday’s news flow. Normal blogging likely will resume on Monday.

In the interim though, I thought it would be interesting to do some quick calculations to see how much interest income China has been receiving on its US bond portfolio. The US BEA provides a fairly detailed breakdown of the United States’ income balance with China. As one would expect, the US is paying far more interest now than it did in 2000 -- or for that matter 2004. 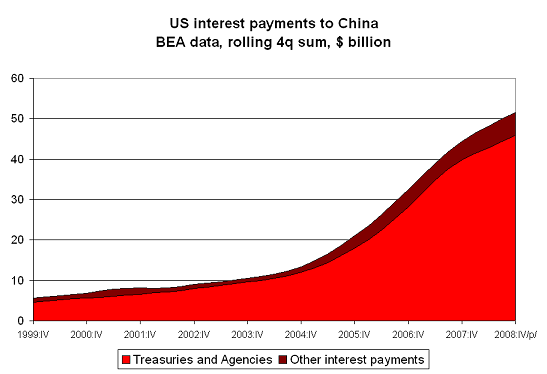 The US data likely underestimates payments made to China in 2008 -- largely because interest payments are calculated -- I suspect -- based on the information in the survey data (if the US knows the coupon on the bond and the holder, it can estimate payments) and the 2008 data hasn’t revised to reflect the last survey. Moreover, the US data -- even after the survey revisions -- likely understates China’s holdings on US corporate bonds. 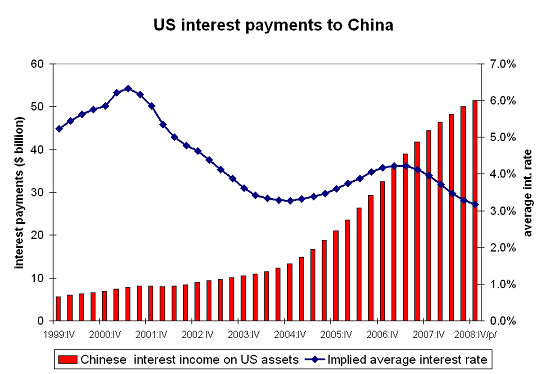 The estimate of China’s US assets I used for the calculation is very very rough -- I assumed 70% of China’s total (non FDI) foreign assets are in dollars, and compared the rolling four quarter sum of interest payments to China’s estimated average holdings of dollars over the past four quarters. If I had taken the time to convert my monthly data on China’s estimated US holdings into a quarterly data series, I could have produced a better estimate -- one that no doubt would show that China is receiving a slightly higher average interest rate on its US holdings. (the calculation above slightly overstates China’s holdings of US bonds, and thus understates the average interest rate on those bonds)

Directionally, though, there is no doubt that the average cash return on China’s bond portfolio is falling, as one would expect. And it no doubt has further to fall, especially now that it has shortened the maturity of its Treasury portfolio by buying so many Treasury bills.

While the market value of China’s long-term bonds soared during the crisis -- that doesn’t provide much comfort to an institution that doesn’t mark to market. Conversely, China’s cash compensation for taking dollar risk is falling.

That though was a risk China’s government opted to take when it opted to maintain an undervalued exchange rate and thus to accumulate dollar assets. There was always a risk that the renminbi value of China’s dollar bonds would fall. And by say 2003 it wasn’t exactly a secret that the Fed tends to respond to a US slowdown -- and a fall in US inflation -- by cutting US policy rates.

How Are U.S. Colleges Dealing With Coronavirus?