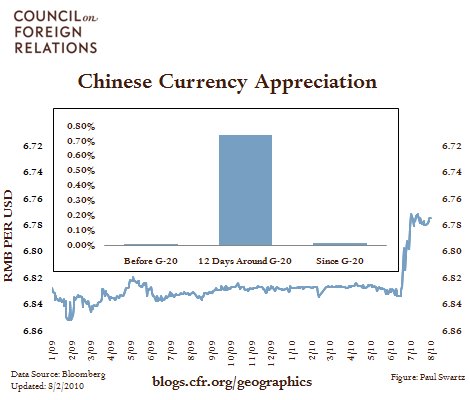 In the run-up to the June G20 summit in Toronto, China came under significant U.S. pressure to loosen its currency peg to the dollar. “The administration constructively set the G20 meeting as an important juncture for China to change its inflexible currency practices,” said Sander Levin, chairman of the House Ways and Means Committee on June 16th. “If China does not act and the administration does not respond thereafter, the Congress will act.” Then one week before the summit, China announced that it would relax the peg, and indeed the renminbi (RMB) began to rise. The political tension dissipated. Yet since July 2nd, five days after the summit, the RMB has ceased rising. It would appear that the much lauded Chinese currency pledge was a pre-summit head fake.

Dyer: China Currency Dispute Has Not Gone Away