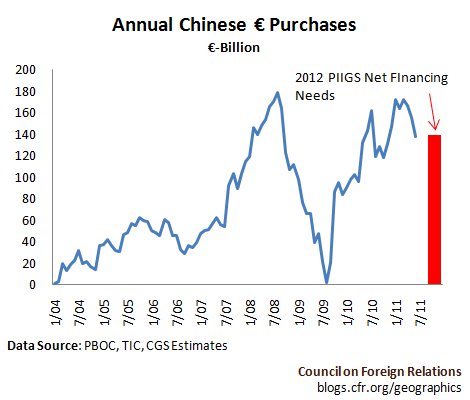 Chinese Premier Wen Jiabao recently hinted teasingly that China might buy more risky-country European debt; a “helping hand,” he called it.  Yet even if China follows through, it is unlikely to increase its intended purchases of European debt but rather just change the composition.  China’s euro purchases have increased dramatically over the past two years (we estimate these to be ¾ of reserves purchased in excess of the change in China’s U.S. asset holdings).  Most of this can be presumed to have been invested in German bunds, Europe’s closest thing to U.S. Treasurys.  Chinese euro purchases over the coming twelve months equivalent to those of the previous twelve months could cover the entire 2012 net financing needs of Portugal, Ireland, Italy, Greece, and Spain (PIIGS), as the figure above shows.  Every euro China invests in new PIIGS debt, however, can be expected to come at the expense of bunds.  Such a diversion would push up German interest rates—precisely what Germany wants to avoid by resisting eurobond issuance—without giving Germany any greater say over eurozone fiscal policies.  Chancellor Merkel therefore gains little, if anything, in making political concessions to secure Wen’s “helping hand.”

Steil and Swartz: Who Would Bail Out the European Central Bank?

Is the U.S. Output Gap Overstated?