Chinese policy makers are worried by the slowdown in y/y export growth. Never mind that 18% y/y growth during a US slowdown isn’t bad -- or that China’s monthly trade surplus topped $20 billion in June despite very high oil prices. Policy makers are more focused on the difficulties facing some of China’s textile firms than still high inflation. The result: a growing sense that China plans to slow the pace of RMB appreciation and relax various lending curbs.

I though don’t see much evidence that China’s export machine has slowed by much. At least not yet. Some forward looking indicators suggest a slowdown. And rising transportation costs could potentially cut into China’s exports too. Reducing the "miles" a product travels is one way of reducing the world’s oil consumption. But there isn’t yet much sign of a real slowdown in the data. 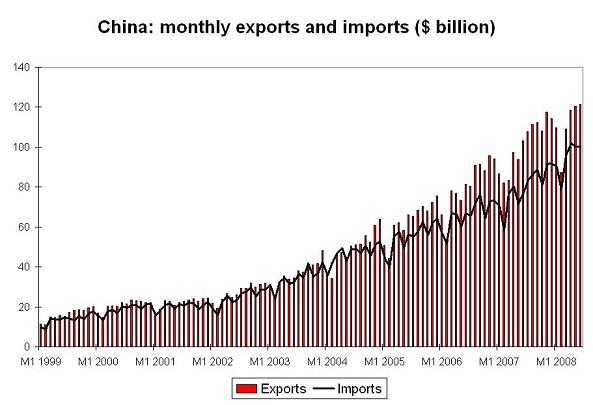 Sure, year over year export growth was down a bit in June, at least in percentage terms. But May was unusually strong. That likely reflects an increase in working days this May relative to last May. And more exports this May meant a bit fewer in June. Goldman (Hong Liang, I would assume) is right on this (in the FT):

However, several economists cautioned against reading too much into trade figures for one month, as they can be volatile. Goldman Sachs, the investment bank, said it made more sense to combine May and June figures, which together showed a strong growth rate for exports of 22.6 per cent, in line with last year’s trend.

Let me put it a bit differently. Sustaining a constant percentage increase in exports over time implies that the y/y increase in dollar terms has to rise. That is why is simply isn’t realistic for China to expect to be able to sustain 30% y/y growth for long now that it exports over $1.2 trillion of goods. The math just doesn’t work. Export growth of close to 20% off a $1.2 billion base implies a $240 billion plus year over year increase in China’s exports. That is more or less that we are seeing.

The fall in China’s surplus isn’t a reflection of a slowdown in export growth, so long as export growth is measured in dollar terms. It rather reflects a huge rise in China’s import bill, as the price of China’s commodity imports has soared. Consider the following graph, which shows total exports and imports on a rolling 12m basis. A rolling 12m sum may miss some recent changes, but I don’t see much sign of a slowdown in exports. 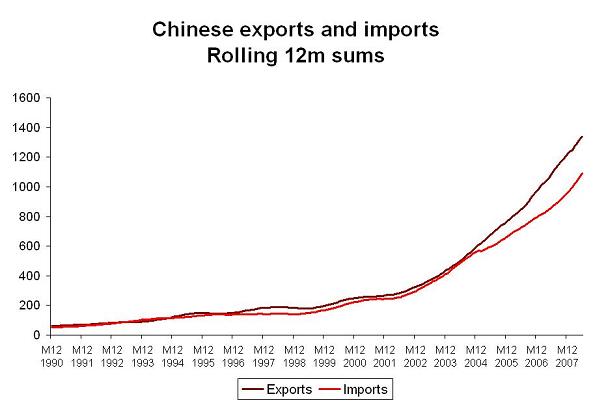 Andrew Batson -- whose reporting I generally quite like -- argues that China’s trade surplus has likely peaked. The surplus over the last 12 months is a bit under $250 billion, less than the $260 billion registered in 2007 (though well above the $177b in 2006).

With growth in exports slowing while imports are accelerating, it now seems clear that China’s trade surplus peaked around the beginning of this year and is set for a gradual decline. China’s global trade surplus in goods came in at $57.62 billion for the second quarter, down 13% from a year earlier.

I am not convinced. Higher oil prices will cut into the surplus for a bit longer. But if oil prices stabilize, import growth will slow. And so long as the y/y increase in China’s exports is running at close to $250 billion, there is actually a plausible argument that Chinas surplus will resume rising -- particularly if China can substitute Chinese made components for imported components.

That, incidentally, is what the IMF forecasts in the WEO. The logic here isn’t hard to see. The RMB remains exceptionally weak v the euro, which is why exports to Europe are up 25% y/y, way more than exports to the US. The US will eventually pull out of its current troubles, supporting Chinese export growth. And the oil exporters will start spending more. Higher oil prices might lead to less "trade" to minimize shipping costs. But that might work to China’s favor, at least in part -- manufacturers might adjust to higher shipping costs by replacing imported components with Chinese components rather that shifting final assembly out of China.

The $250 billion y/y increase in China’s exports (comparing July 2007 through June 2008 to July 2006 to June 2007) also puts the complaints of China’s textile exporters in context. Some Chinese producers are getting squeezed -- and more may get squeezed going forward. But they are fundamentally getting squeezed by China’s success moving up the value chain, which is putting pressure on wages and on the RMB. Both China’s trade surplus and its export growth remains remarkably strong, all things considered -- if measured in dollars. 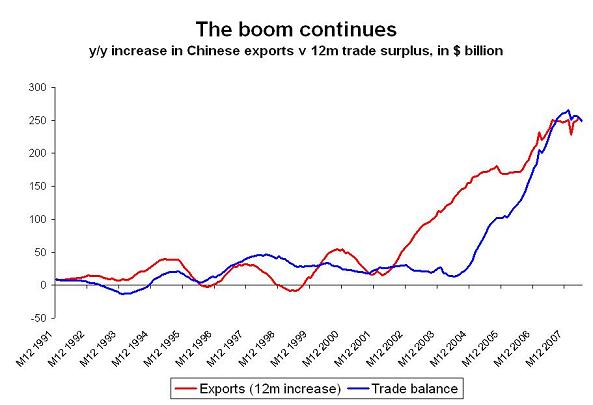 The talk coming out of China now has me worried that China is unwilling to allow the RMB to appreciate if China’s trade surplus is flat (or falling) and export growth is slowing. Yet if China slows the pace of RMB appreciation to keep its exports up over the course of this year -- and if, as a result, China can keep its surplus from falling by much -- that has major implications for the global economy. Oil averaged about $70 a barrel last year. It should average $125 a barrel in 2008 if oil stays around $140 for the rest of the year. That’s a big increase. If China imports about 4.1 mbd (BP’s latest number), China’s 2008 oil import bill will rise by about $85 billion. Sustained $140 oil would imply a $100 billion increase in China’s oil import bill relative to 2007.

If China’s surplus stays close to constant and the oil exporters combined surplus rises, the deficits of other oil-importing economies have to get bigger. Either the US or the European deficit has to rise. Places like India and Turkey just aren’t big enough to offset the overall rise the oil surplus. It would be far healthier for the world economy if the country with the biggest surplus saw its surplus fall. Yet right now it is likely that many of the countries with the biggest deficits will instead see their deficits rise.

Bottom line. China’s surplus should be falling, given that the US economy has slowed dramatically (cutting into exports) and that oil has increased by so much. Instead its surplus is flat. That almost assures that an unbalanced world isn’t going to come back into balance.

Maybe China is a typical creditor after all