Chinese policy makers continue to take steps to try to limit capital inflows into China.    The recent 1% increase in the reserve ratio also suggests ongoing inflows, or at least the need to sterilize rapid reserve growth.

It is not hard to see why capital would continue to try to make its way into China.   The market now expects the RMB to appreciate at a decent clip against the dollar.  Chinese domestic interest rates are rising.   US interest rates are falling.    RMB deposits should return more – in dollar terms – than dollar deposits.

That is why Chinese domestic savers are abandoning dollar deposits at a steady pace.  Chinese dollar-denominated household savings deposits are down by $12b so far this year, after falling by around $25b between the end of 2002 and the end of 2006

But Chinese policy maker apparent concern isn’t reflected in the data. At least not the recent data.    Starting in August, the pace of reserve growth slowed –

The following graph compares Chinese reserve growth over the past 12 months to China’s trade surplus, its estimated interest income and FDI inflows. 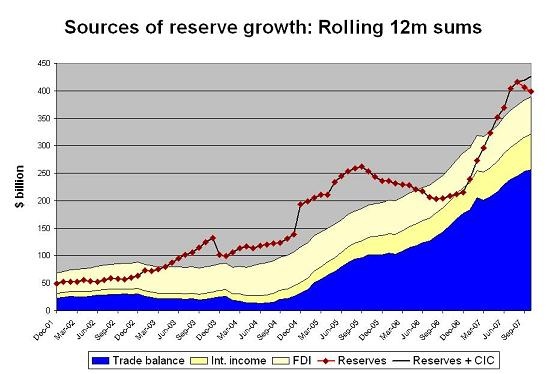 Make no mistake, Chinese reserve growth is quite strong.  But the trend seems to have changed.   Reserve growth is now back in line with China’s basic balance.   Hot money inflows – which account for the gap between reserve growth and the sum of the trade surplus, the interest of China’s reserves and FDI inflows – seem to have disappeared.  Even after adjusting the data to reflect the impact of the CIC, hot money flows seem to have slowed significantly recently.

Let’s look more closely at the recent data, since up until the last few months it looked like hot money inflows were picking up.

The October reserve increase was around $22b.    But valuation gains likely explain about $9b of the increase, leaving an increase of only $13b.    Logan Wright (survived SARs) thinks that the unwinding of swaps with Central Huijin associated with the 2003 recapitalization is adding over $3b to China’s reserves a month (both the BOC and CCB can convert some of the fx they received back in 2003 into RMB).   That brings the underlying pace of reserve growth to about $10b.

On the other hand, China’s trade surplus was $27.8b in October, FDI inflows were around $6.8b and interest income on China’s reserves should add another $5-6b a month to China’s stock of foreign exchange.   Put it all together and Chinese reserves should be rising by $35-40b in October even in the absence of any hot money inflows.

Indeed, if you plot China’s reserves growth against a very rough measure of China’s trade balance and the balance from trade, interest income on reserves and FDI inflows, there is now a large gap.   Over the last three months, Chinese reserves have increased by about $35b after netting out assumed valuation gains.  That total would fall to $25b if Chinese banks are unwinding a little over $3b of Huijin related swaps a month.

Over the last three months, by contrast, China’s trade surplus was a bit above $75b.  My measure of China’s basic balance suggests an increase of more like $115b even in the absence of any hot money flows.   That leaves a gap of around $80b – as the following chart shows. 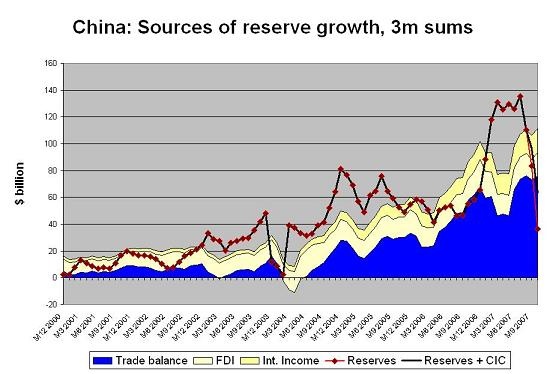 That gap has to come from some kind of capital outflow – whether hot money outflows,  massive purchases of H shares, outward FDI, or the like..

The obvious explanation for the fall in China’s reserves is the creation of the China investment corporation (CIC), China’s sovereign wealth fund.    But, the Ministry of Finance has only issued bonds with a combined value of $94 (703b rmb) to fund the CIC, with most of the funds coming from a single $80b/ 600b bond sold to the PBoC rather than to the banks.   We more or less know that $67b went back to this went back to the PBoC when the CIC bought Huijin.   If the big bond sold to the PBoC was used to buy Huijin in September, and the funds raised in September were used to buy foreign exchange, the CIC reduced China’s reserve growth by $13b in September and $14b in October.

Adding in the $27b assumed to have been transferred to the CIC still leaves known asset growth below the trade surplus.  It shrinks the gap between China’s basic balance and identified outflows from $80 to $53 …

Yet Chinese policy makers continue to express concern about hot money inflows.   The  reporting of the usually well-informed Richard McGregor of the Financial Times also suggests large inflows in q3.

Part of the answer could be QDII outflows.   Mutual funds offering foreign stock (especially H shares … ) have proved to be attractive to retail investors. But the likely scale of the flows here seems a bit too small.   $10 billion, max.

Part of the answer is outward investment – ICBC’s stake in Standard Bank for example, or CDB’s investment in Barclays.   But I am not sure though when the actual cash flows associated with these transactions will take place.   And even these large transactions seem a bit too small to explain the entire gap.    Standard Bank was $5.5b; CDB/ Barclays $3b, and CITIC/ Bear involved an exchange of assets so it didn’t obviously produce a net outflow.

Moreover, the high frequency measure of FDI going into China – which only covers manufacturing inflows I think -- has understated the amount of FDI inflows that shows up in the BoP in the first half.    Looking only at the FDI inflows therefore misses some offsetting outflows, but it also misses some additional inflows.

So what explains the gap?

My best guess – one inspired by comments I heard during my trip to Beijing and reinforced by subsequent legwork – is that the state banks and state owned enterprises have been encouraged to hold on to a lot more foreign exchange.  More on that later.