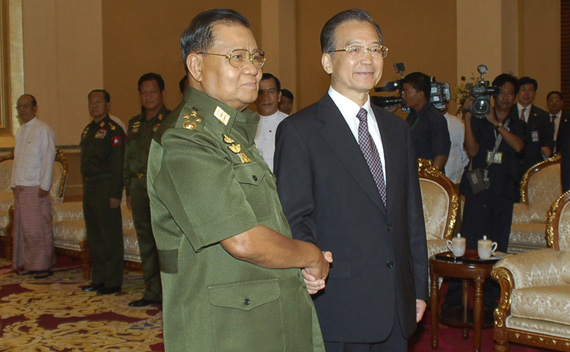 After welcoming last week, in succession, Kim Jong Il and Burmese dictator Than Shwe, perhaps the Chinese leadership should go for a trifecta; maybe this week they can host a party for Omar al-Bashir or roll out the red carpet for Islam Karimov.

Seriously, Than Shwe’s visit to China, in advance of Burma’s first national elections in twenty years, appeared like a solid vote of support for the Burmese military, who plan to use the election to create a civilian veneer for their rule while perpetuating the military’s power through its designated parties. Certainly, all public statements by leaders like Wen Jiabao and Hu Jintao emphasized that China would support the Burmese government no matter the “international situation,” a code phrase for pressure on Burma by leading democracies. And, while five years ago the charge that China was backing Burma’s junta because it reaped massive profits in Burma was seriously overstated – Chinese investment at that time remained relatively small – it is now accurate. China accounted for over 90 percent of direct foreign investment in Burma in 2008 and likely similar figures in 2009, and will benefit enormously from new petroleum pipelines from Burma scheduled to come online in the next two years.

Still, the perceptions of China as either Burma’s puppet master or see-no-evil enabler are incorrect. Though Beijing’s economic and military ties afford it influence in Naypyidaw, it’s not a dominant influence; the Burmese generals, unlike Kim Jong Il, have many other potential economic partners, and have been savvy enough to diversify their strategic partnerships. The generals – particularly Than Shwe and number two Maung Aye – are also unpredictable and highly xenophobic, and that includes a fear of Chinese domination as much as any fear of Western intervention in Burma. (Many older, senior Burmese generals cut their teeth as younger officers fighting communist Burmese rebels backed by Beijing.) China has been unable to get the kind of cooperation it wants from the Burmese junta on issues ranging from narcotics control to some settlement of the junta’s looming clashes with ethnic minority armies hunkered down near China’s borders. And Chinese officials are extremely worried that the junta’s ultimatum to these ethnic armies to essentially disarm is going to cause a refugee outflow into southwestern China.

The portrayal of China as Burma’s enabler, though in some ways correct, is also in some ways overstated. India and Thailand are extremely culpable as well, while Singapore and Dubai are guilty of allowing the junta and its business allies to bank in their countries virtually unmolested. Though Wen and Hu might publicly praise Than Shwe, it’s unclear to me whether the Chinese leadership is really convinced that the Burmese generals offer a more stable, economically welcoming brand of leadership than a freer, civilian government might. Chinese officials have repeatedly tried to convince the Burmese military to embark upon basic economic reforms, such as strengthening the financial system – reforms that would significantly benefit Chinese businesses operating in Burma. Mostly, the generals have refused. Not for no reason have Chinese officials continued an ongoing dialogue with exiled Burmese politicians opposed to the junta’s rule.