The pace of decline in China’s foreign reserves matters.

Not because China is about to run out.

But rather because China will at some point decide that it doesn’t want to continue to prioritize “stability” (against a basket) and will instead prioritize the preservation of its reserves, and let the yuan adjust down. Significant voices inside China are already making that argument.

And I fear that if the yuan floats down, it will stay down. China will want to rebuild reserves, and—if exports respond to the weak yuan—(re)discover the joys of export-led growth. Relying on exports is easier than fighting the finance ministry’s opposition to a more expansive (on-budget) fiscal policy, or seriously expanding the provision of social insurance to bring down China’s savings.

I thus disagree with those who argue that the “China” shock is over. It depends a bit on the exchange rate. China’s exports of apparel and shoes have probably peaked. But China’s exports of a range of machinery and capital goods continue to remain strong—and at a weaker exchange rate, China could supply more of the components that go into our electronic devices, and export far more auto parts, construction equipment parts, engines, generators, and even finished autos than it does now. “Mechanical” engineering writ large continues to be a significant part of the U.S. economy, and even more so the European economy. 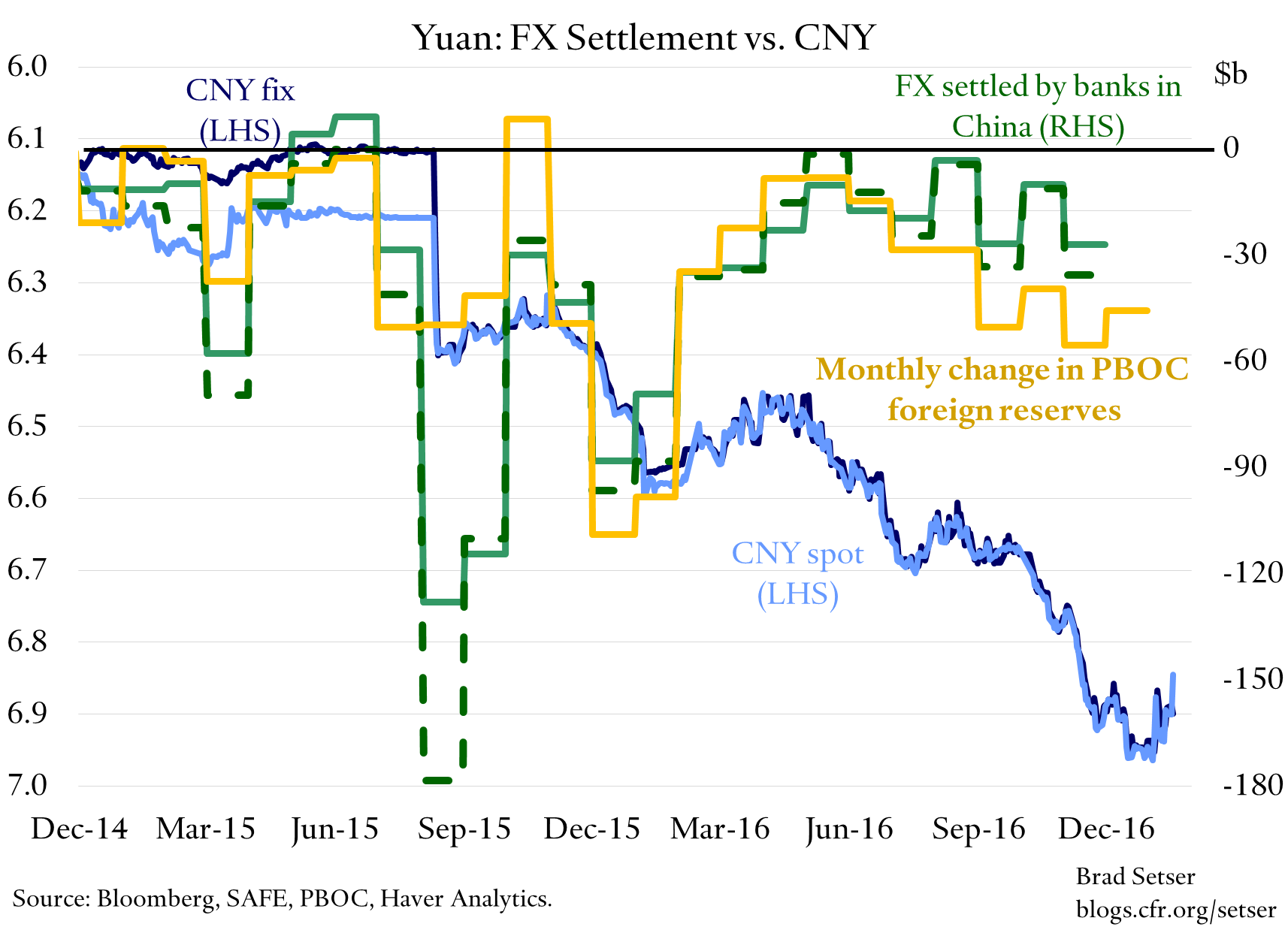 The loss of reserves in December was a bit smaller than in November. But only just. The average monthly fall in q4 was over $40 billion.

That is a pace that is ultimately unsustainable. I think China would be fine with $2 trillion in reserves, given how little foreign debt it holds. Others say $2.5 trillion. If reserves are falling by a steady $40 billion a month/$500 billion year, it is only a matter of time before China hits its limit. With China, it may be a long time though…

However, there are two reasons why I am not yet convinced that it is only a matter of time before outflows overwhelm the PBOC’s reserves and other exchange rate defenses. 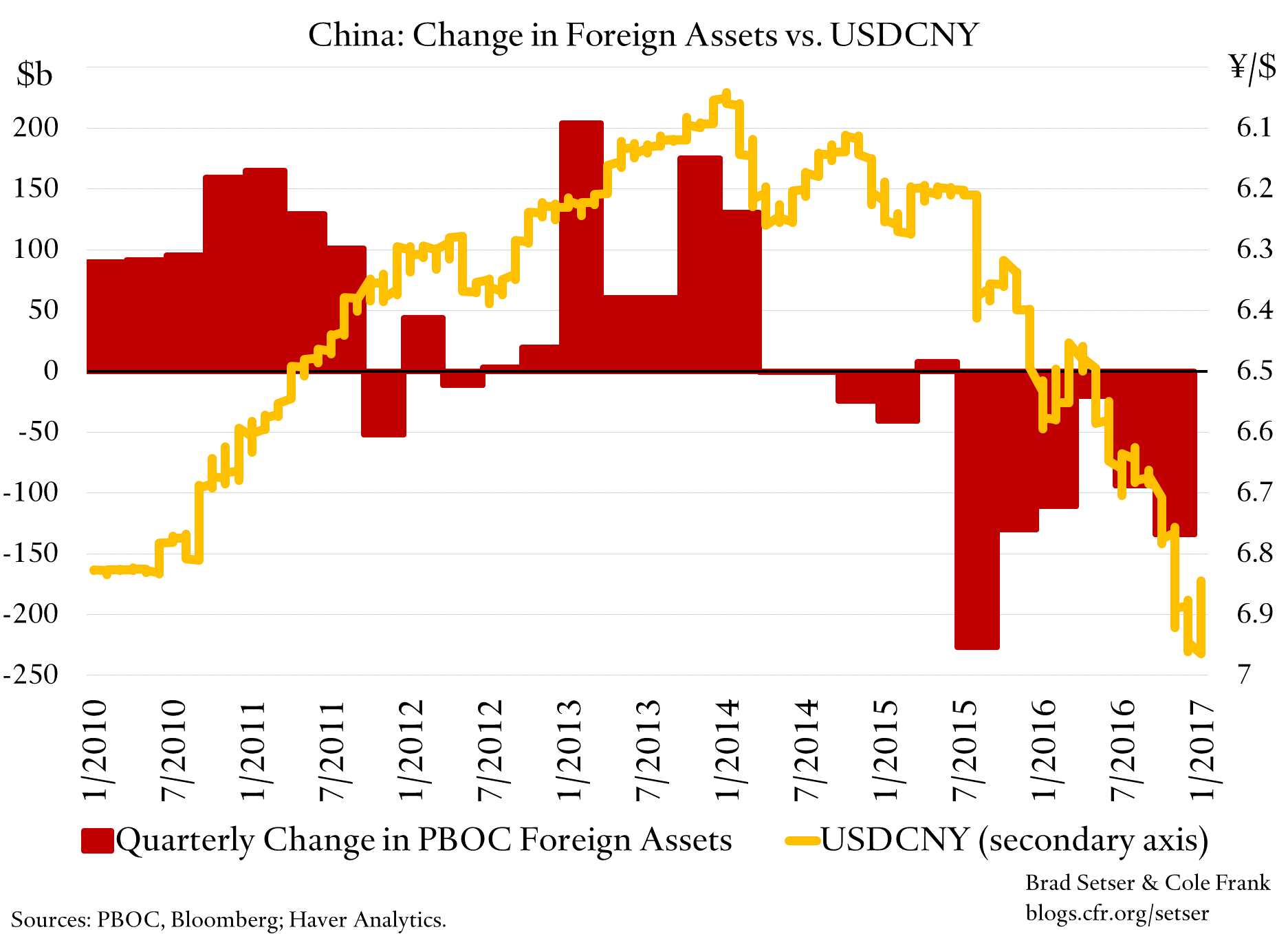 Remember that the PBOC took advantage of dollar weakness in the first half of 2016 to reset the yuan’s level against the basket. I understand why, but that reset had a price—it reinforced expectations that the yuan only will move one way against the dollar.

The second is that a lot of the outflows so far in 2016 have come through channels that I think the State Administration for Foreign Exchange (SAFE) can effectively control, if it was determined to do so. A surprisingly large share of the outflows last year come from balance of payments categories that I think the authorities can control, and can control without too much administrative difficulty, as they ultimately require supervising a relatively small number of accounts at a manageable number of large state institutions (of course there are political difficulties here, but the administrative complexity should be lower).

A bit of balance of payments math:

China runs a goods surplus of around $500 billion (in BoP terms) annually.

And—even with the fall off in FDI inflows—should get another $100-$150 billion in FDI ($250 billion would have been more typical a few years back).

So China has over $600 billion/6 percent of GDP in inflows from FDI inflows and the goods trade to finance its services imports (which likely include a lot of hidden outflows through the tourism side), its FDI outflows, and non-FDI outflows, without having to dip into its reserves.

But I can count outflows of roughly equal size that seem to me relatively easy for the PBOC—really SAFE—to control if they really want to.

In 2016, the banks have been adding to their foreign exchange reserves (other foreign assets) at the PBOC at a roughly $25 billion a quarter pace. That slowed in q4, so let’s call it about $75 billion a year in outflows. That easily could be put to an end; the share of the banks regulatory reserves held in foreign exchange is totally determined by the PBOC.

In 2016, the build-up of portfolio debt and equity assets abroad—almost certainly by a few state institutions or major financial institutions that the state regulates—has been a bit under $25 billion a quarter. Call it $100 billion a year. China knows how to put a stop to these flows; outflows in these line items were essentially zero from 2010 to 2014.

In 2016, overseas lending—long-term loans made by the Chinese state banks to the rest of the world—have averaged a bit over $25 billion a quarter, or $100 billion annualized. These all come from the big state commercial and policy banks. They could be slowed with a bit of regulatory supervision.

And FDI outflows have averaged about $60 billion a quarter in the first three quarters (roughly $250 billion annualized). A more normal number—judging from the numbers seen before the devaluation—would be maybe $25 billion a quarter ($100 billion a year). Reducing outflows there back to the norm—as seems likely to happen—might reduce total outflows by $150 billion.

Sum up these line items, and that takes away $425 billion in outflows—a sum almost equal to the projected fall in reserves in the balance of payments.

And I suspect that if China’s reserves fell by $25 billion a year, no one would care that much (even if such a number implies an ongoing outflow of between $400 and $500 billion, depending on your view of how much of the services deficit is “real”).