The most valuable indicators of China’s intervention in the foreign exchange (FX) market are now out, and both point to a pick-up in sales in September, and more generally in Q3. 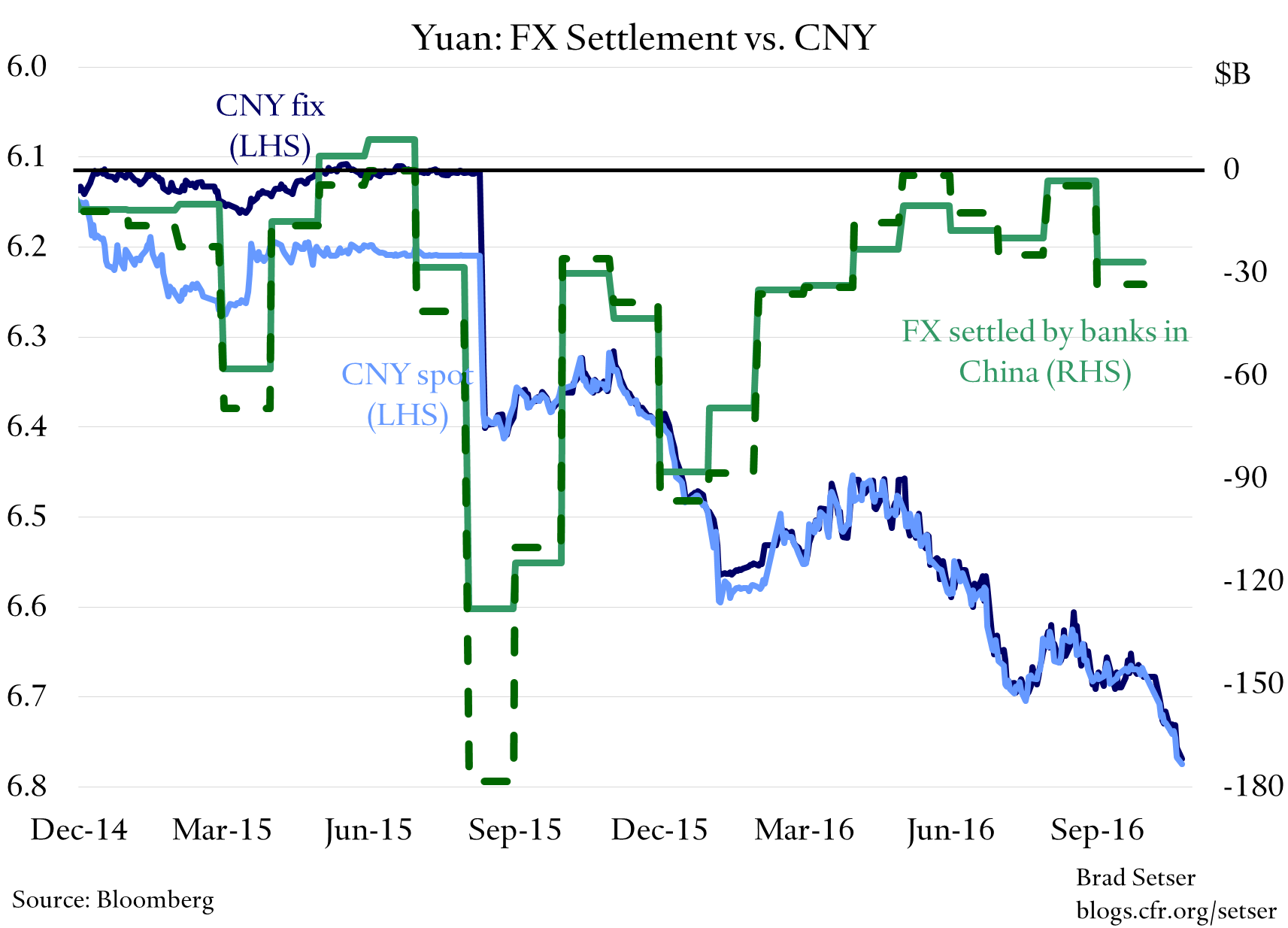 All in all, the pressure on China’s “basket peg” or “basket peg with a depreciating bias” exchange rate regime (take your pick on what managing with reference to a basket means, it certainly has meant different things at different points in time this past year) is now large enough to be significant yet not so large as it appears to be unmanageable.

China still has plenty of reserves; I wouldn’t even begin to think that China is close to being short of reserves until it gets to $2.5 trillion given China’s limited external debt, tiny domestic liability dollarization, and ongoing external surpluses. $2.5 trillion would still be the world’s biggest reserve portfolio by a factor of two, it also would be roughly 20 percent of China’s GDP, which would be in line with what many emerging markets hold. 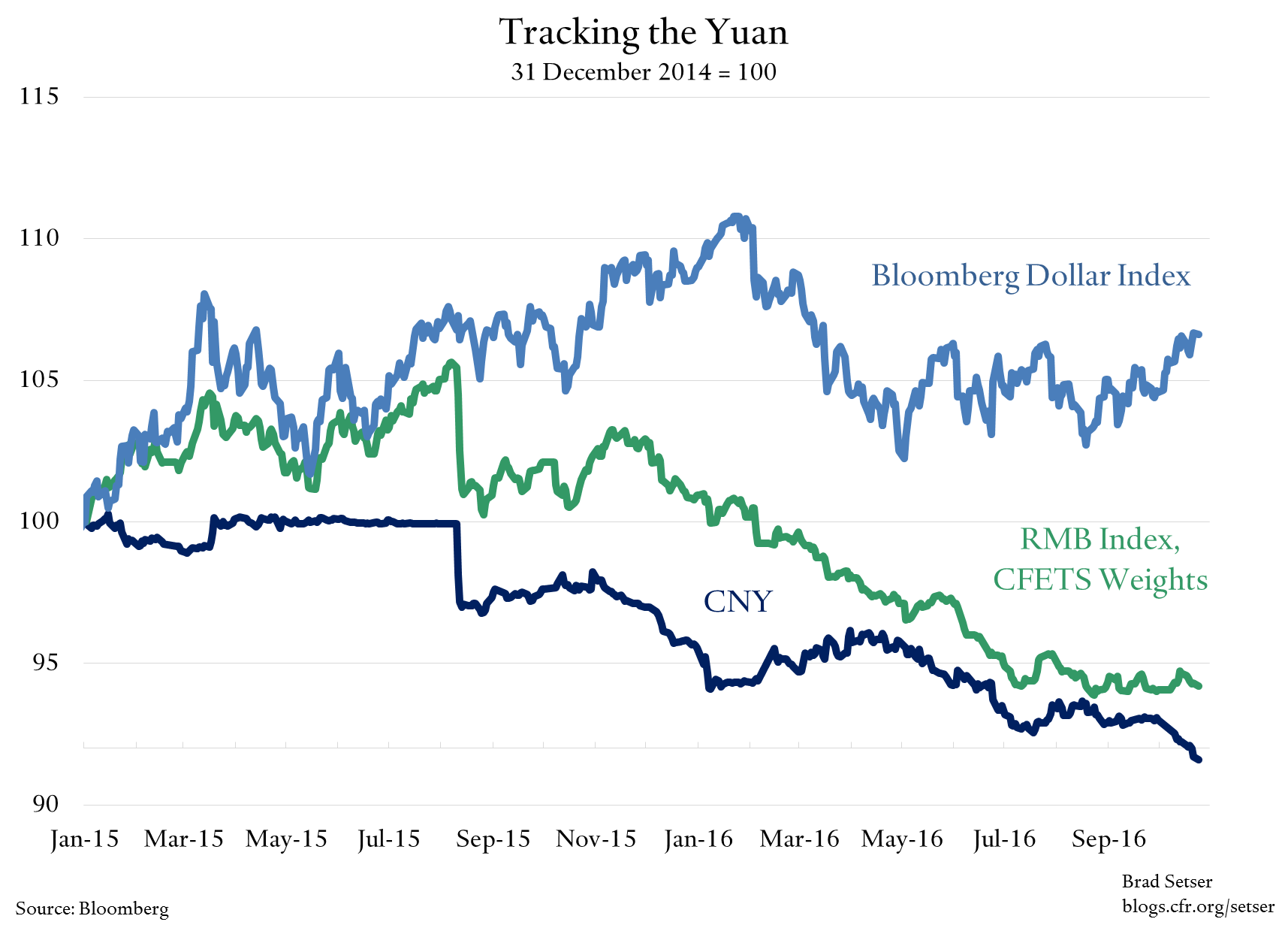 As Robin Brooks of Goldman emphasizes, Chinese households and firms still pay far more attention to the yuan/dollar than the CFETS basket. Dollar appreciation -- against the majors, which implies the yuan needs to depreciate against the dollar in order to remain stable against a basket -- tests the PBOC far more than dollar depreciation. As a result, I would not be surprised if outflow pressures have picked up as the yuan depreciated against the dollar.

Big picture, I think China still has the tools available to manage its currency if it wants to use them. China has a large underlying goods trade surplus. It still has plenty of reserves, and plenty of liquid reserves. Its controls have been tightened, and could be tightened more.

The controls get tested when Chinese firms in particular start to position for further depreciation (firms have much more ability than households to move funds across the border through trade flows and the like). Especially if Chinese residents—and the offshore foreign exchange market— may not be satisfied with the 10 percent move against the basket since last August.

Either that or China may need to show that it really is managing symmetrically against the basket, so if the dollar depreciates, there is a real risk the yuan could appreciate back to say 6.5 against the dollar—and thus the yuan/dollar isn’t a one way bet. If China lets its currency depreciate along with the dollar when the dollar is going down, and then manages against a basket during periods of dollar appreciation, the yuan/dollar effectively becomes a one way bet.

Obviously all this is informed by my belief that the trade data shows the yuan is now fairly valued, or even a bit undervalued.* At the yuan’s current value against the basket, I would expect net exports to start contributing modestly to growth over the next year, especially if U.S. import demand picks up from its cyclical slowdown.

Of course, China’s policy makers may well be quite happy with a bit of support from exports—and a currency’s value is set by more than trade. Financial flows can overwhelm any peg if expectations of a depreciation (or for that matter appreciation) are allowed to build.

*Weak September export volumes should be balanced against strong August volume growth; average growth across the two months is around 3 percent—in line with q2, and likely a a bit faster than the overall expansion in global trade. A weak October would change my views here a bit. The comparison between this October and last October is a true one (same number of working days)—though it will be important to adjust for export price changes (a 5 percent fall in headline yuan exports would be consistent with stable export volumes, very roughly).

Note: edited to correct an obvious error (appreciation was used twice in a sentence, in context one clearly was intended to be depreciation)