China’s headline reserves dipped by about $19 billion in September, dropping below $3.2 trillion. Adjust for foreign exchange changes, and the underlying fall is widely estimated to be a bit more—around $25 billion.

Press coverage emphasized that the fall “exceeded expectations.” To me that suggests “expectations” on China’s reserves aren’t formed in all that sophisticated a way.

$20-30 billion in sales is in line with the change in the PBOC’s balance sheet in July and August (the FX settlement data, the other key proxy for intervention, suggests more modest sales in August). Throw in the September spike in the Hong Kong Inter-bank Offered Rate (HIBOR) —which suggested a rise in depreciation pressure on the CNY and CNH —and $25 billion in sales is if anything a bit smaller than I personally expected.* Of course, some of the sales could be coming through the state banks; time will tell.

The balance of payments data show Q2 reserve sales of about $35 billion (the change in the PBOC’s balance sheet reserves was $31 billion). But other parts of China’s state added to their foreign assets in Q2. In fact, counting shadow intervention (foreign exchange purchases by state banks and other state actors), I actually think the government of China’s total foreign assets may have increased a bit in the second quarter. 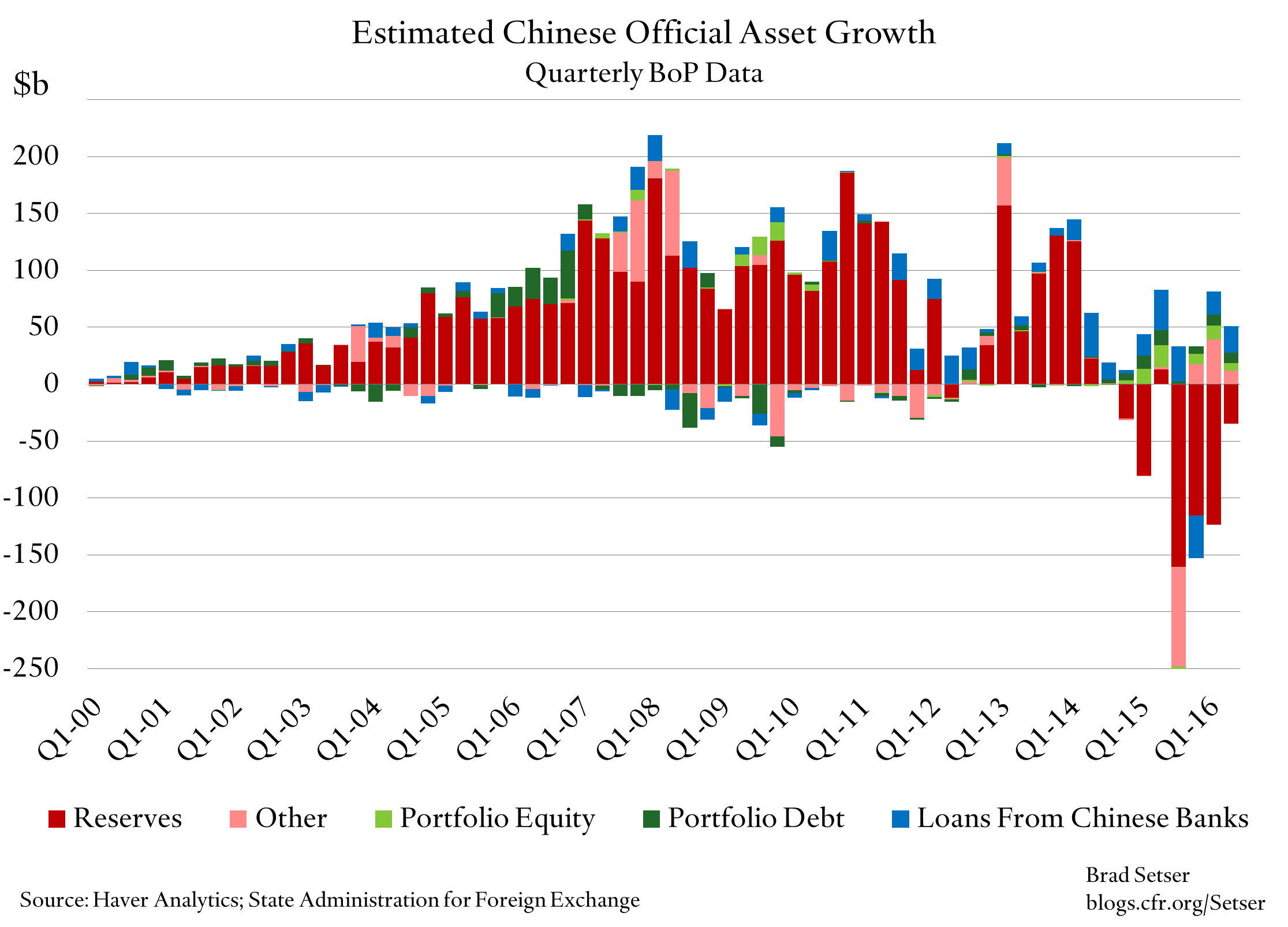 There are a couple of line items in the balance of payments that seem to me to be under the control of the state and state actors. Most obviously, the line item that corresponds with the PBOC’s other foreign assets ("other, other, assets" in balance of payments speak: up $12 billion in q2, after a bigger rise in q1). But most portfolio outflows are likely from state-controlled institutions (portfolio debt historically has been the state banks, portfolio equity historically has been the China Investment Corporation and the state retirement funds in large part). If these flows are netted against reserve sales, there wasn’t much of a change in q2. In my view, shifts in assets within the state should be viewed differently than the sale of state assets to truly private actors.

To get a positive number in q2, though, you need to add in the buildup of foreign assets associated with the increased foreign lending of the state banks (this adjustment is the most debatable). I suspect that the bulk of the China Development Bank’s outward loans are in the banking data, and thus the loan outflow should be viewed as a policy variable (China for example looks to have shut down this channel in q4 2015). Offshore loans were up about $25 billion in q2—a bit over the five year (2011 on) average of around $15 billion a quarter. That pushes my estimate for the total accumulation of foreign assets by China’s state, counting policy lending, into positive territory.

Q2’s balance of payments data paints a picture of relative stability. I suspect that my broader metric for Q3 will show a fall in q3. And if that fall is eventually confirmed,** there is a question of why pressure picked up.

China’s trade accounts show a substantial surplus (a very substantial surplus on the goods side, and a decent surplus on goods plus travel and tourism—the non-tourism service account is close to balanced). In volume terms, Chinese export growth has picked up—with y/y growth since April on average of 5 percent.*** That is better than the overall expansion of global trade.

My guess is that expectations for further depreciation picked up over the course of q3. 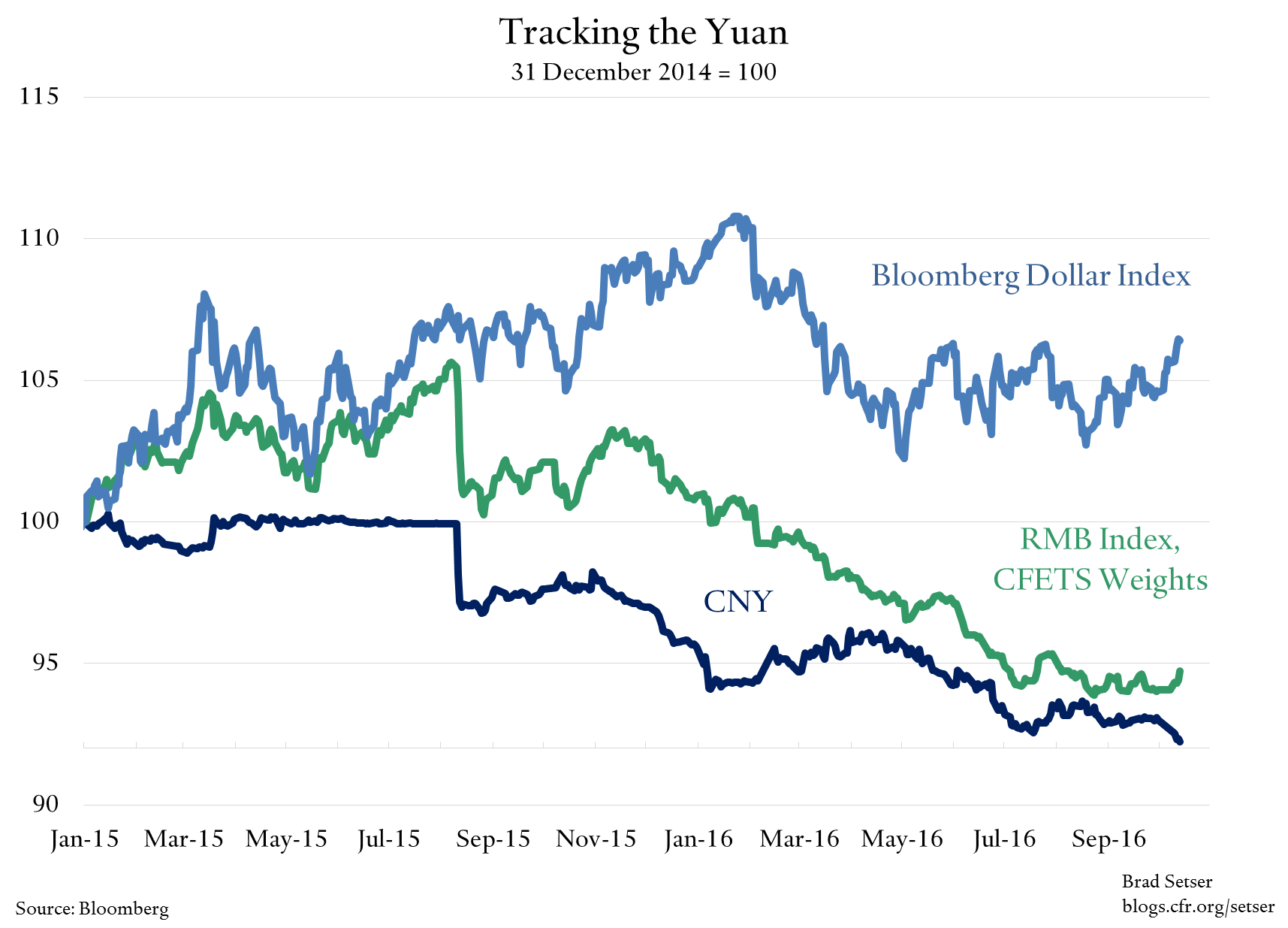 The implication of this view is that the market is (still) betting on where it thinks Chinese policy makers want the currency to go. As long as the market thinks China wants to depreciate one way or another against a basket after Hangzhou and the SDR decision, outflow pressure will continue.

The alternative view is that Chinese residents want to get out of Chinese assets independently of the expected path of the yuan, and that the controls put in place in the spring are starting to show a few more leaks.

The weaker fix on Monday doesn’t really settle this debate; the fix was below the symbolically important 6.7 level against the dollar, but was also broadly consistent with maintaining stability against the CFETS basket. There isn’t yet enough information to determine if China’s current policy goal is stability, or a stable pace of depreciation.

* We don’t know the currency composition of China’s reserves, or the precise way changes in the value of China’s bond portfolio enter into headline reserves. The noise in headline reserves goes up when the expected change is small v the size of the stock, given all the other moves that can impact the stock. Plus or minus $10 billion in headline to me is noise. I prefer the proxies for intervention, which are less influenced by valuation.

** I am waiting for broader measures of sales for September; all analysis for now is contingent on confirmation by subsequent data releases.